Much to love in Mary Kratt’s poetry collection 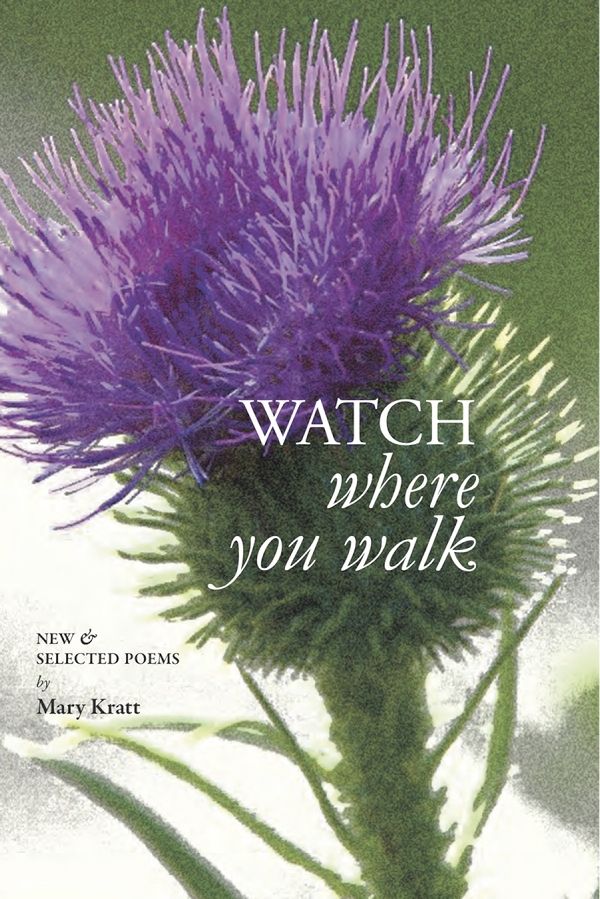 Mary Kratt will sign her new book of poetry on Saturday, May 2, at Literary Bookpost, 1-3 p.m., part of the store's celebration of independent booksellers.

This lovely and important book of poems, beautifully designed by Leslie Rindoks at Lorimer Press, is the collection by Mary Kratt that we have waited for. “Watch Where You Walk: New and Selected Poems” is, quite simply, a major book of poems. Kratt’s last book of poems, if I remember correctly, was “Small Potatoes,” published in 1999 by St. Andrews Press.

Since then she has focused on historical writing, primarily about Charlotte and the North Carolina Piedmont. But she has been writing poems quietly and purposefully during this long period of time, and now we have the result — a stunning book quite unlike most “New and Selected Poems” because it has a much larger body of new poems than those collections normally print. It is really more a new book of poems than a selection from her older poems, good as those may be.

This is a book of poems full of heroes. In “Out of Back Creek,” the second poem in the book, Kratt writes: “Tales of mavericks, mayhem/and heroines in a mostly competent clan-/Mother is one….”  She certainly is. The mother, portrayed with wisdom and humor by Kratt, dominates the first section of the book, which is called “On the Thistle Path.” We love her courage, her determination, her absolute refusal to give up on life, even at the age of 98.

Read “Field Trip From Assisted Living” and “Not This Time,” read “After Months of Silence,” all three of which beautifully present the mother’s final years— vivid and moving, and at the same time realistic, not sentimental.

In the second section, called “The Edge” the hero is the father, who loved the water, the Chesapeake. He appears again in the third section, “These Trees,” in a gorgeous poem called “Trees of the Southern Forest.”  A “fisherman, teacher, principal,” the father “drove widows to the airport, told stories of his city/and trees to educate the Yankees. We feel the powerful presence of those trees in the poem.

Another hero is the grandmother, the central figure in the selections from “Valley & Spirit Going Barefoot.” I particularly loved “Womanly,” where we see the young child helping her grandmother lace up her corset. “Grandmother entered its circle/as a diva embraces the hall,” Kratt writes.

But perhaps the most memorable heroes and heroines are the characters in the final section, my favorite, “Songs on Silent Water: Voices from the Past.” Here we encounter John White returning to Roanoke Island in 1590, Dorothy Wordsworth with her brother William at Grasmere in 1800. There is an extraordinary poem about the slave, Harriet Jacobs, hiding for seven years in order to escape her owner, and a delightful poem about Charlotte Bronte in the voice of her biographer, Elizabeth Gaskell. We meet Gerrude Stein and Virginia Woolf, and closer to home, Anna Huntington, whose powerful animal sculptures grace Brookgreen Garden.

Each of these poems brings the central character alive so that even if we already know these figures, we come to understand them in a new and more intimate way.

There is more, of course, that doesn’t fit quite so easily into my theme of “heroism,” like the tender and wise poem “Waiting” right in the middle of the book. This is a book for the reader to savor. It is clear, it is accessible, and it is marked throughout by Mary Kratt’s wisdom, her maturity, and her graceful, concrete language. It is, as I said at the beginning, the book we have been waiting for.