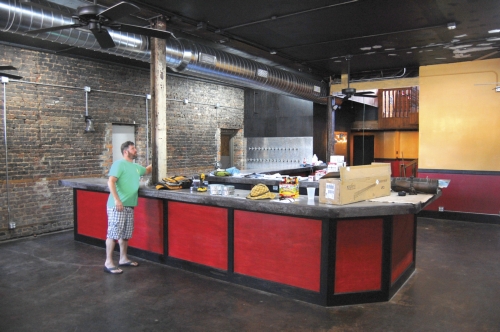 Todd Littleton flips the light switch inside the old firehouse downtown. He is turning the building into a bar that will serve craft beer and barbecue. It will be called Firehouse Brew Pit. Littleton also owns Benchwarmers - which is about to undergo a full renovation.

Something old is being re-imagined as something new in downtown Salisbury.

The old firehouse on South Lee Street is being transformed into a craft-beer bar with barbecue on the menu. Todd Littleton, owner of Benchwarmers, is expanding his downtown venture to the two-story brick building that dates to the 1890s.

Littleton plans to open the bar this week  — Wednesday, he said. He’ll move the staff from Benchwarmers, his bar on East Fisher Street, to the firehouse so the Fisher Street building can undergo renovations.

Benchwarmers is a sports bar now, but Littleton said he is making it into a full restaurant and sports bar — on the first floor. There will be a 70-foot-long outdoor balcony, with a glass wall separating the inside from the outside, built on the second floor. The balcony will be 12-feet deep, set back from the street.

The second floor will be used for live music, standup comedy and as a general event venue, Littleton said. It’ll be called the Loft at Benchwarmers.

The project, which has been coming together for two years, is now materializing.

Littleton acquired the firehouse last year, but said he wasn’t sure until recently how he would use it. He first thought it would be temporary space while Benchwarmers is being renovated. But now he plans to make it permanent.

“Love the building, love the feeling,” he said.

The restaurant side will focus on barbecue ribs and brisket. A rotating selection of craft beer will be made up of North Carolina brews, he said.

There are plenty of barbecue places in town, Littleton said, but there is nowhere to get barbecue with a good beer.

He might even put a small microbrewery in the place, he said.

On the second floor, he wants to put office space and a condo. It’ll be a place where he can work, or stay, when he’s in town — he and his family live on High Rock Lake. He said he may even rent the space out.

Littleton, who was a firefighter in the Air Force, is a Salisbury native. After getting out of the Air Force in 1994, he took at bartender job at Benchwarmers while waiting for a spot to open up in the city’s fire department.

But he found bartending to be more lucrative, and he took ownership of Benchwarmers in 1999. He even met his wife, Jennifer, at Benchwarmers. They’ve been married for 10 years.

“My life is pretty much centered around downtown,” Littleton said.

Littleton thinks Salisbury is right on the cusp of becoming a destination spot.

“I think Salisbury is growing,” he said. And he expects the number of people living and visiting downtown to keep rising.

There’s so many people within a 60-mile radius, he said. The city’s location, centered between Charlotte and Greensboro, is great, he said.

People like Littleton, who have a vision and work toward making that vision a reality, are what downtown needs in order to prosper, according to Paula Bohland, executive director of Downtown Salisbury Inc.

If you go to any successful downtown, she said, you can almost always find a handful of people who have worked with others toward a common vision.

Entrepreneurs who use their own resources to make things happen — that’s how Bohland put it.

She said Littleton is in her office once a month, talking about his ideas for downtown.

She mentioned names such as Shawn Campion, president of Integro Technologies, and Go Burrito owner Mikey Wetzel, when talking about the importance of having independent people who can act on their own vision.

She also commended Byran Wymbs, who partnered with Chad Vriesema — owner of Central Piedmont Builders — to buy and renovate the Bernhardt building on North Main Street. The building is now the new home of Sweet Meadow Cafe, a bakery and several apartments currently under construction.

Central Piedmont will be doing the renovations at Benchwarmers.

The people driving downtown Salisbury are always positive about what is going on, always looking to use the resources available to them, Bohland said.

When he visits downtown in places such as Asheville or Winston-Salem, Littleton said he sees similarities — the food, entertainment and theaters — to Salisbury.

As for the firehouse, which used to serve as city hall and the jail — the jail cells are in the basement and no bigger than a cubicle — Littleton said he wants to restore the building to its “original grandeur.”

He said the city’s staff has been great to work with, and that he plans to use the incentives City Council established last year for investments in the downtown.

Littleton also owns a building behind the firehouse that faces Innes Street. He talked about how he wants to turn it into a music hall that can hold 800 people.

“I’d like to be a catalyst” for downtown, he said.

There’s just one thing missing: the fireman’s pole from the old firehouse.

If somebody knows where it is, Todd is looking for it.