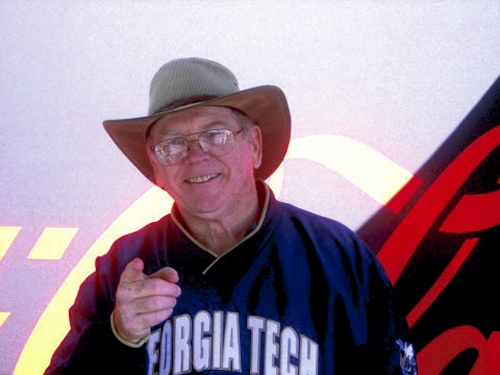 submitted photo Rick Lewis, of Salisbury, was a starting defensive back at Georgia Tech in 1970-71, and was once Sports Illustrated magazine’s national back of the week.

SALISBURY — The feature stories in the Nov. 2, 1970, issue of Sports Illustrated are Muhammad Ali’s comeback from three years in exile to pummel Jerry Quarry in a boxing ring, the financial turmoil of baseball’s Washington Senators, and the impact on the NFL of a strange, new concept called “Monday Night Football.”

You have to turn to page 54 in the college football section of that issue to find it, but there it is:

The SI national back of the week is a Georgia Tech defensive halfback (we call them cornerbacks now) named Rick Lewis. Lewis scored two touchdowns in the fourth quarter of a 20-6 win against Tulane and he set up the Yellow Jackets’ third touchdown in a soggy affair in which players splashed there way around Grant Field in Atlanta.

Lewis has lived in Salisbury for 24 years — his wife Deborah is a physician and her work brought them here — but he doesn’t make public broadcasts about his glory days. He is proud of his time at Georgia Tech, his degree more than what he accomplished on the football field, but he doesn’t dwell on the past.

“I met my wife in Memphis years after college and she had no idea that I’d been a football player,” Lewis said.  “When we went to a reunion of the Georgia Tech team, she was really surprised when I kept showing up on the highlight film. She said, “Hey, you must have been pretty good.”

More evidence that Lewis was pretty good came recently when he was part of the 2015 induction class of  his hometown Hall of Fame. That’s the Bucks County Chapter of the Pennsylvania Sports Hall of Fame. Lewis’ fellow inductees included Villanova men’s basketball coach Jay Wright.

Lewis starred for Levittown’s (Pa.) Woodrow Wilson High in football as well as baseball from 1965-67. He was the winner of the Delaware Valley Notre Dame Club Knute Rockne Award. He was  named to the Pennsylvania Big 33 team.

Lewis’ dad worked for U.S. Steel. His mother was glad her son was a star athlete but she was concerned with his education. His parents didn’t want him going to a “football factory.” Lewis listened. He was a strong student and his dream was to be an engineer.

There was a parade of football coaches through the Lewis family living room in 1966 and 1967. Purdue, Michigan, Notre Dame, you name it.

“I remember coming home from school one day and Joe Paterno and George Welsh were in the living room,” Lewis said.

Paterno was early in his tenure at Penn State, while Welsh, later head coach at Navy and Virginia, was Paterno’s assistant.

“Georgia Tech was the one school that offered me a grant-in-aid until I graduated,” Lewis said. “That was important. With everyone else, it was a grant-in-aid for four years.”

Dodd stepped down as Georgia Tech’s football coach in February 1967, although he stayed on as athletic director. Bud Carson, a former UNC defensive back, ex-U.S. Marine and the future architect of the Pittsburgh Steelers “Steel Curtain” defense, followed Dodd as head coach of the Yellow Jackets.

Lewis began his college career in West Point, N.Y., with the U.S. Military Academy. He was the quarterback on the freshmen team and directed the plebes to an undefeated season.

The military life isn’t for everyone, though.

“I was fine with discipline, but there’s a difference between discipline and regimentation,” Lewis said.

Seeking a less regimented lifestyle, Lewis transferred to Georgia Tech. He still had a service obligation to fulfill and he did so, through ROTC at Georgia Tech, and then duty in the reserves.

As a school without a conference, Georgia Tech played a tremendous national schedule, taking on ACC and SEC schools, as well as fellow independents such Notre Dame, Florida State and Miami.

It was big-time football. Lewis embraced the challenge but had no illusions about it.

The Yellow Jackets were serious student-athletes. You missed a class at your own risk. If coaches found out, wind sprints were a reminder that football players still had academic obligations.

Lewis started for three seasons — 1969 to 1971 — in the defensive backfield. He always was the left cornerback. He asked Carson why?

Lewis’ teammates included quarterback Eddie McAshan and running back Greg Horne, the first two scholarship black players signed by Georgia Tech. McAshan was the first black quarterback to start for any of the major schools in the South.

A tough matchup for Lewis, who was 6-foot-1 and weighed 200 pounds, was Auburn sprinter Terry Beasley, who could run 100 yards in 9.6 seconds and had Heisman Trophy-winning QB Pat Sullivan throwing to him.

“Against Beasley, I perfected the bump, wrap and hold technique,” Lewis said with a smile.

And then there was future Dallas Cowboys legend Billy Joe Dupree. When Georgia Tech played against the 6-foot-4, 225-pound Dupree’s Michigan State team, the Yellow Jackets played zone, but Lewis had to deal with Dupree a few times.

“He’d run out and put his arms up and he was so big, there wasn’t a lot you could do,” Lewis said. “I hit him so early once that there were more flags than a May Day parade.”

Lewis had an outstanding career that included 10 interceptions — including one in the end zone against Notre Dame QB Joe Theismann. He also recalls tackling the future Washington Redskins star for a loss on an option play.

Lewis’ best season was 1970. That’s the year he had six picks. One came in a victory against rival Georgia. There was a leaping interception in a Sun Bowl victory against Texas Tech that gave the Yellow Jackets a 9-3 season and their greatest success in a number of years.

Lewis still has the certificate from Sports Illustrated regarding that unbelievable quarter he had in the rain against Tulane.

It started with a snap sailing over the head of Tulane’s punter, who chased the ball and got to it just as he was swarmed by Yellow Jackets. The ball popped free and headed straight to Lewis in the air. He galloped 30 yards to the end zone before being mobbed by teammates.

Then there was a deflected pass that caromed to Lewis. He made a heck of a runback on that one — you can still watch Georgia Tech’s No. 13 weaving around and through Tulane players on YouTube — for a 56-yard pick-six.

Lewis nearly had a third touchdown, picking off an overthrown pass that struck him in the numbers and making another elusive return before finally going down.

Lewis had a brief fling with the NFL. Carson had been hired by the Pittsburgh Steelers as defensive backs coach. That led to Lewis getting a look in camp as a free agent in 1972.

“It was eye-opening — I’m looking around, and there’s Franco Harris, he’s 6-foot-2, 230 pounds, and he’s a running back,” Lewis said. “They tried me at strong safety. I was in one exhibition game, and the tight end from the Atlanta Falcons (probably Jim Mitchell) convinced the Steelers to release me.”

Lewis’ life has worked out fine. He continued his education with an MBA from Duke, he’s raised a family, and he’s had a satisfying working life in sales, marketing and business. Among other things, he’s now adjunct professor of marketing and analytics at Catawba’s Ketner School of Business.

Lewis can be seen around Salisbury sporting his trademark safari hat.

“The thing I’m proudest of about my football career is I got a great education,” Lewis said. “I used athletics to do what I wanted to do.”