For soldier wounded at Fort Hood, long wait for Purple Heart is over 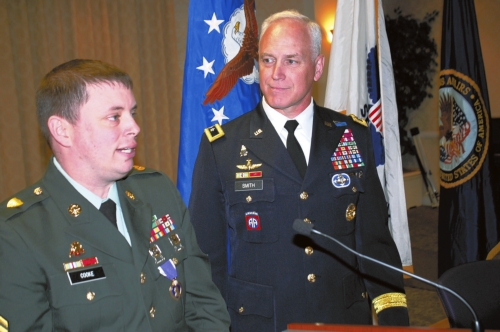 Mark Wineka/Salisbury Post With Maj. Gen. Jefforey Smith of Fort Bragg at right, Army Sgt. Matthew Cooke of Norwood speaks to reporters after he received the Purple Heart Saturday at the Hefner VA Medical Center. Cooke was wounded in the 2009 shootings at Fort Hood, Texas.

It was a long time coming.

The afternoon of  Nov. 5, 2009, Cooke was waiting for a blood test at Fort Hood’s Soldiers Readiness Processing Center, as part of his preparations for a third deployment overseas.

Cooke heard someone close behind him shout “Allah” — witnesses later translated the Arabic phrase yelled out as “God is Great” — and shots rang through the center.

“We thought it was an exercise,” Cooke said.

When he realized Army Maj. Nidal Hasan was shooting for real, Cooke moved under a chair, covered his ears and lay low to the ground. When he looked up, he saw the sergeant on the floor in front of him was bleeding.

“To me, it seemed like a cry for help,” Cooke said. He jumped to cover the fellow soldier, and as he was in midair, Cook was shot in the buttocks by Hasan. That particular shot — he was hit five times in all — “pretty much ruined everything inside me,” he said.

Spc. Amber Gatlin rushed in and, with the help of a staff sergeant, helped to move Cook and the man he had covered outside, where they waved down a truck and raced to the hospital. Later, when his adrenalin rush was over, Cooke passed out.

Over the next four months, he would be in and out of intensive care, sometimes on a ventilator.

When Hasan’s shooting spree at the central Texas post was done that day, 13 people had died, and Cooke was among 30 who were wounded.

For more than five years, the shootings were classified as cases of workplace violence, not terrorism, though Hasan said last year he wanted to become part of the Islamic State terrorist group.

Hasan has been sentenced to death and is on death row in the military prison at Fort Leavenworth, Kan.

Because of that workplace-violence categorization, Cooke and others wounded or killed at Fort Hood that day were not eligible for the Purple Heart, leading to years of lobbying and legal action on their behalf.

Earlier this year, Congress expanded eligibility criteria for the Purple Heart, and it meant the Fort Hood shooting victims could qualify for the medal. With that done, Secretary of the Army John McHugh directed the Army “to provide all possible benefits” to the victims at Fort Hood who were awarded the Purple Heart.

Cooke, 35, and others will now receive hostile-fire pay, as well as combat-related special compensation for retired soldiers injured and/or disabled in the rampage.

Cooke, a Norwood resident, is 100 percent disabled and still receiving therapy at the Hefner VA Medical Center in Salisbury, where he received his Purple Heart Saturday.

“I do think the Purple Heart took too long,” Cooke said, “but I’m glad to have it now.”

After Maj. Gen. Jefforey Smith of Fort Bragg presented the Purple Heart, Cooke celebrated with the large crowd in the Building 6 Social Room by hoisting a framed medal with the official document over his head.

Cooke was not thinking of himself when he hurled his body onto his fellow soldier, Smith said. Plus, he was wounded by an enemy of the United States. He said Cooke’s Purple Heart was recognizing a soldier who acted with valor.

Pittenger said Cooke displayed “heroism under fire.” Cooke had accompanied Pittenger to this year’s State of the Union address, and Pittenger also made sure Cooke received an American flag Saturday that had flown over the U.S. Capitol.

Cooke’s receiving of the Purple Heart took “longer than it should have been,” Pittenger’s letter said. Pittenger was represented at the ceremony by Robert Becker, district director for the congressman.

Chris Carter, deputy chief of staff for Hudson, presented Cooke with remarks Hudson made on Cooke’s behalf this past week on the floor of the House.

U.S. Sen. Thom Tillis and his wife attended the Saturday afternoon ceremony in person. The crowd also included members of the Order of the Purple Heart and Patriot Guard.

The whole event was organized by the Southern Piedmont Chapter of the American Red Cross.

Cooke’s stepfather, Gerard Frappier, and Cooke’s mother, Diane, have long been involved as volunteers for the Red Cross. Gerard Frappier has gone on 25 national deployments for the organization.

Cooke lost 12 pints of blood in the 2009 shootings , and he thanked the American Red Cross for playing a part in saving his life, though he said something bigger was at play.

“Today, I thank God for actually saving my life that day,” he said, adding he believes he was spared for a purpose.

Smith said Cooke, who was discharged from the Army in October 2013, wants to pursue efforts to better protect military personnel at U.S. installations, such as Fort Hood, and make sure “others don’t bear this burden on American soil.”

Smith said it was one of the highest honors for him to be at Saturday’s ceremony. “There’s no other place I’d rather be,” he said.

Smith described Cooke as confronting at Fort Hood an enemy the United States has been fighting since Sept. 11, 2001. That enemy will do whatever it can to hurt the United States and undermine its values and way of life, Smith said.

Cooke joined the U.S. Marine Corps in 2002 and served as a legal assistant, but he wanted more action. He enlisted in the Army in 2004 and served twice in combat in Iraq. Smith said Cooke had a couple of close calls as a gunner.

In the aftermath of the Fort Hood shootings, Cooke was one of three listed as seriously or critically wounded beyond the dozen killed — and one of those three people later died.

“It’s been extremely difficult,” one of Cooke’s sisters, Christina Whitley, said of what her brother has gone through since the shooting. “It still seems like yesterday the day he was shot.”

A New York native, Cooke has been living with his mother and stepfather during his recovery, which continues to be an ongoing process.

The crowd gave Cooke a standing ovation as he held his Purple Heart overhead. He confided to the audience that besides the blood test he was waiting for that day at Fort Hood, he also had shown up to claim a $50 gift certificate.