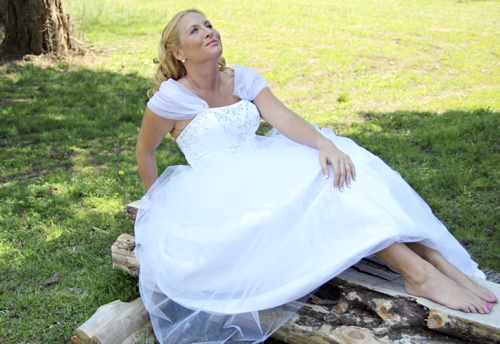 Once upon a time … a boy met a girl in the autumn of 2012, there were sparks, that lead to a melodious array of fireworks, and then on April 26, 2014, the culmination of a courtship into a beautiful union. On that day, around four o’clock in the afternoon, Jennifer Carole Stoker became the bride of Zachary Adam Fink. Here is the rest of the story … Jennifer hails from State Road, North Carolina. The daughter of Reverend(s) Gayle and Geraldine Stoker, she is the fourth child in a family blessed with five children. Jennifer loves and admires her parents completely. No doubt she was privileged to be raised in a loving home that always placed Jesus Christ at its center. Jennifer is the granddaughter of Kathleen Miller.
Zachary is the son of George and Kim Morgan Fink of Salisbury. He is a country boy by birth, never meeting a stranger and capable of fixing anything!!! It was a pleasure to raise such a son. He has the strong ideals and integrity of his dad. The smile and sense of humor, along with the capability to have a good time, like his mom. Zachary is the grandson of Gerald and Rachel Shoaf.
On Saturday, April 26 at Trinity Wesleyan Church friends and families alike gathered to witness the beginning of Jen and Zac’s life together. The officiants were Reverend Gayle Stoker and Jeremy Stoker, brother of the bride. Attendants standing for Jennifer were maid of honor Chastity Copeland; bridesmaids Michelle Crawford, Breanna McCaskill, Caroline Waller and Brianne Curlee. Gentlemen serving as best men were Zac’s dad, George Fink, and Eric Campbell, childhood friend. Groomsmen Rusty Myers, Brad Graham, Bryan Koontz, Peter Dobbins, are all friends from West Rowan High School.
The happiness and joy that abounded in this ceremony was palpable. So much of that was by the inclusion of the children (nieces and nephews) that were included in the service. Flower girls were nieces of Jennifer’s, Gabriella and Emmalyn Rogers and Katherine and Clara Stoker. Ring bearers were Ethan and Evan Durham and Henry Stoker, Jennifer’s nephews, and Zac’s nephew, Donovan Tucker. All of the children walked down the aisle and up to the platform to give Uncle Zac a welcoming hug and kiss. It was a beautiful sight and a precious moment in the beginning of the Fink’s new life together.
Jessica Stoker, the bride’s sister-in-law, lent her beautiful voice as soloist.
The celebration continued at the Millbridge Ruritan Clubhouse on Sloan Road. Music for the ceremony and throughout the reception was compiled by Jessica Tucker, the groom’s sister. Catering by Hendrix BBQ and Adam Patterson (Corriher Sausage). Wedding cake was made by the groom’s mom, Kim Fink. Zachary and Jennifer honeymooned at the North Carolina coast.
The couple now makes their home in Salisbury. Today they are celebrating their one year anniversary. The first chapter of this wonderful story will conclude with the scripture used in the wedding program:
“Place me like a seal over your heart, like a seal on your arm; for love is as strong as death, its jealousy unyielding as the grave.
“It burns like a blazing fire, like a mighty flame. Many waters cannot quench love; rivers cannot sweep it away. If one were to give all the wealth of one’s house for love, it would be utterly despised.” Song of Songs 8:6-7