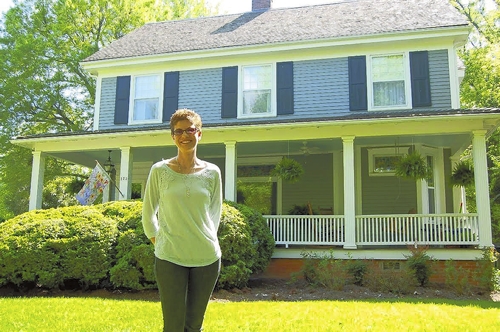 Having been raised in historic homes, both Leah and Shawn Campion have always appreciated the charm of an older home. 'So when we had the chance to move into one, we took that leap,' says Leah. After moving into her West Square home dating back to 1909, pictured, Leah became active in the Historic Salisbury Foundation. Elizabeth Roy/For the Salisbury Post

When Leah Campion moved to Salisbury 13 years ago, she had a 16-month-old baby and a husband who traveled for work, and had yet to find her “place.” After college, Leah and her husband, Shawn, lived briefly in Lynchburg, Va., then spent two and a half years in Pennsylvania before moving to Salisbury for Shawn’s work.

“As the years went on, I realized that I didn’t want to just live in the community. I wanted to be a part of it,” says Leah.

As her two girls – now ages 10 and 13 – got a bit older, Leah capitalized on her increasing amounts of “me” time. Today, Leah is so much more than a resident of Salisbury. She’s a champion of volunteerism and a prime example of how doing what you love can be fruitful for the community.

“I’m basically your average stay-at-home mom,” says Leah, 37, who volunteers weekly at Faithful Friends Animal Sanctuary, is a first vice regent for her Daughters of the American Revolution chapter, actively volunteers for the Historic Salisbury Foundation and Salisbury Symphony Guild, and is a PTA member at both Knox Middle and Overton Elementary schools as well as a certified Communities in Schools volunteer.

Oh, and one more thing: She’s also a trained classical pianist – a tidbit that most people do not know about her – and a newly reborn musical theater performer with recent roles in Piedmont Players’ “Chicago” and “Cats” productions.

“Every once in a while you meet a person who you know is truly making a difference,” says Anna Moorefield, events coordinator for the Historic Salisbury Foundation. “Leah Campion is one of those people.”

Ask Leah why she has filled her plate to the brim with community involvement, and she’ll tell you that it’s not about doing what is expected of her, or what will look good in other people’s eyes. Rather, her endeavors are in areas in which she has genuine interest, and her organizations of choice are those in which Leah feels she can make a measurable impact.

Leah’s involvement in the Historic Salisbury Foundation, for example, came about three years ago after she and Shawn purchased a home dating back to 1909 in the West Square.

“Both my husband and I grew up in older homes. We liked the character of an older home,” says Leah. “So when we had the chance to move into one, we took that leap.”

The historic foundation came knocking soon after the Campions began work on their home, Leah says, and the Campions agreed to put the home on the 2012 OctoberTour. Leah’s involvement grew from there. She spent two years on the foundation’s board, and in 2014 was the OctoberTour chair.

Along with sharing her love of music and theater with her children – both of whom are active in ballet or theater, and play two instruments each – Leah has also instilled a sense of community responsibility in her girls. Kerry, 13, raised grant money to paint a floral mural with an inspirational message – “You choose how you blossom” – that was hung on an exterior wall of Knox Middle School this past fall.

Both daughters enjoy accompanying Leah in volunteering at Faithful Friends – 10-year-old Abby especially, Leah says. And together with a group of other 10- to 13-year-old girls in their neighborhood, Kerry and Abby have formed what they call an “Attic Club” which meets in the century-old attic of the Campions’ home. So far the club has raised money selling items in the front yard, and has donated money and pet supplies to Faithful Friends.

“I think they’re getting what their father and I are trying to do as far as being a part of the community, not just living here,” says Leah.

Shawn, too, sees that the girls are catching on, and credits Leah for much of that.

“Leah has influenced our entire family to be active volunteers in a variety of activities and organizations,” says Shawn. “She leads the girls by example.”

Helping Salisbury continue to grow is a priority for both Leah and Shawn. As the president of Integro Technologies on South Main Street, Shawn works to create jobs and attract other businesses to Salisbury, Leah says.

“I think that Salisbury has so much potential. I really do,” says Leah. “Even in the 12, 13 years that we’ve been here, it has come such a long way.”

And according to her peers, Leah’s ability to spot promise for growth is one of the things that makes her so effective in the community.

“She sees the potential around her, whether that is a historic home that needs restoring, a school system that needs extra attention, or even a lonely animal that needs a friend,” says Anna.

Originally from a western suburb of Cleveland, Ohio, Leah Campion is not “from here” in the way that many of us think of. Her accent will tell you that she is a child of the Great Lakes – though she can say “y’all” with the best of them.

But one thing is for certain: In Salisbury, Leah has found her “place.”

By Elizabeth Roy For the Salisbury Post Spring is around the corner. The grass will soon green, and flowers will... read more