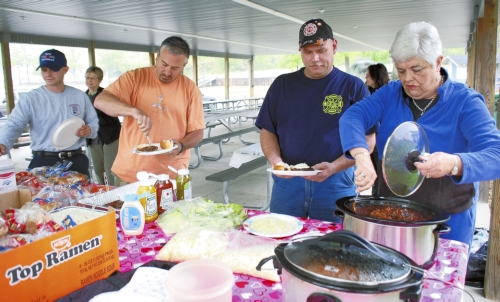 FAITH — Saturday wasn’t exactly the perfect day for a hamburger and hot dog cookout in the park.

But the rain and cool temperatures did nothing to dampen the spirits of Faith Baptist Church members who sponsored a cookout at Legion Park for all the police officers and firefighters in the immediate area.

“I think it’s great,” said Frank Daniel, a firefighter with Rockwell City. “The community does see what we do and appreciates it.”

The idea for this first-ever cookout came from the mission committee at Faith Baptist.

Larry Beck said the idea came up while church members, who are searching for a new pastor, were going through resumés for the position and noted how often the candidates mentioned their churches’ community services projects.

The church built 17 different ramps in one year, for example.

“We can about build them blind-folded,” J.C. Eagle said.

The church has done international mission work, too. But Beck proposed doing something for local firefighters and police officers because, to him, it seemed as though “they are not getting the respect they need these days,” he said.

A spring cookout would be a good way to honor them and tell them they are appreciated, Beck said.

Mary Henley, head of the mission committee, jumped on board quickly.

“We just thought it was a wonderful idea,” she said, adding it’s always good to recognize the people who serve the public every day.

The whole event came together quickly, and it turns out the cookout was competing with a lot of other activities Saturday, including the big fish fry at the lake, the Cruise n’ Barbecue at St. Paul’s Lutheran Church and a whole day of rain.

“All these things hit us, but we decided to go with it anyway,” Beck said. “… If they like it, maybe next year we can do a little bit more planning.”

Beck, Eagle, Carl Doby and Charles Cauble manned the grill at Legion Park, while Margaret Cauble, Carol Hopkins, Pat Doby and Ann Holzmeister took care of everything else under the big shelter.

The serving line included all the fixings for the hamburgers and hot dogs, including slaw, tomatoes, lettuce, chili, onions and condiments.

“You’ve got to have chili on a hot dog,” Doby told the men and women going through the line. “It’s a Southern thing.”

The church also provided potato chips, Apple Uglies, iced tea and lemonade. The public servants were invited to drop in at the park between 5 and 8 p.m.

“We appreciate them putting it on,” said Faith firefighter Matthew Koon.

Officers from the Granite Quarry-Faith Police Authority were among those who arrived early.

“If we need somebody arrested, will someone here do it for us?” Doby asked.

That would be a yes.