Be cool and come meet the creator of Alien Dude 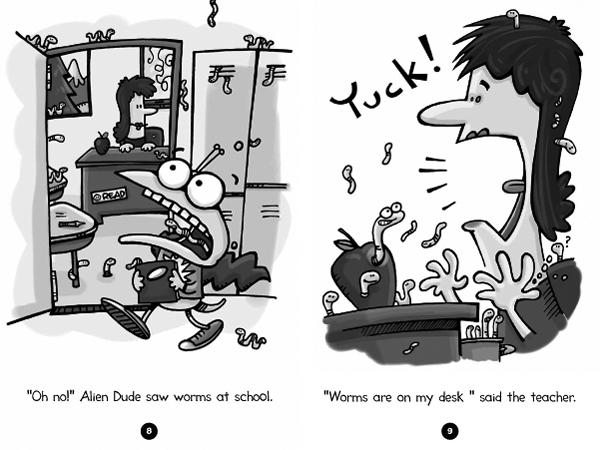 Pages from "Alien Dude And the Attack of Wormzilla," by E.K. Smith and illustrated by Peter Grosshauser.

How can you resist a title like “Alien Dude and the Attack of Wormzilla”?

The author hopes you can’t, since it’s the first title in a series for reluctant readers. It’s specifically aimed at boys, but girls would like it, too.

It’s got zany black, white and gray illustrations, is packed with humor and action. It has all the boys’ favorite things — yucky worms, farts, grossness and morphing.

Which will lead right to the next title, “Alien Dude, Mr. Evil Potato Man, and the Food Fight,” which was published late last year.

The stories are by Beth Smith, better known as E.K. Smith, who had a reluctant reader son. She started writing stories that would appeal to him, but when she got it wrong, he told her. She searched for similar books, but came up short. With her son’s help in rewriting the stories, she found a new reluctance, this time from publishers who only wanted experts or educators as authors.

So she left her teaching job at an elementary school in Charlotte to start her own publishing label. She called it Zip Line Publishing because her family had a blast doing their first zipline.

The Alien Dude series started in January 2014, and is going to be a 10-book series. Teacher Smith writes under the pename E.K. Smith, because that sounds cooler, and the books are illustrated by Peter Grosshauser.

Smith’s goal is for boys to read these books by themselves. They’re aimed at 6-9 -year-olds.

Her books aren’t the simple 20-pagers you might expect, but a long 60 ages, with problems to solve and solutions to find. She thinks boys are more sophisticated than people realize.

Her son, Lake, helped her name Alien Dude, who was first named Shade Farley. Not a cool name. Exploding worms are cool, singing is not. Burping is pretty cool, too.

Mr. Evil Potato Man puts a spell on the school food at lunch, turning the kids into the food they eat. Alien Dude must save the day and you know that will be accomplished with some sort of awesome moves.

Grosshauser has illustrated for Klutz Books, HIghlights and McDonald’s.

Smith will be at Literary Bookpost on Saturday, May 2, from 2:30 to 4:30 p.m., telling story and serving snacks. It will probably be grossly cool.