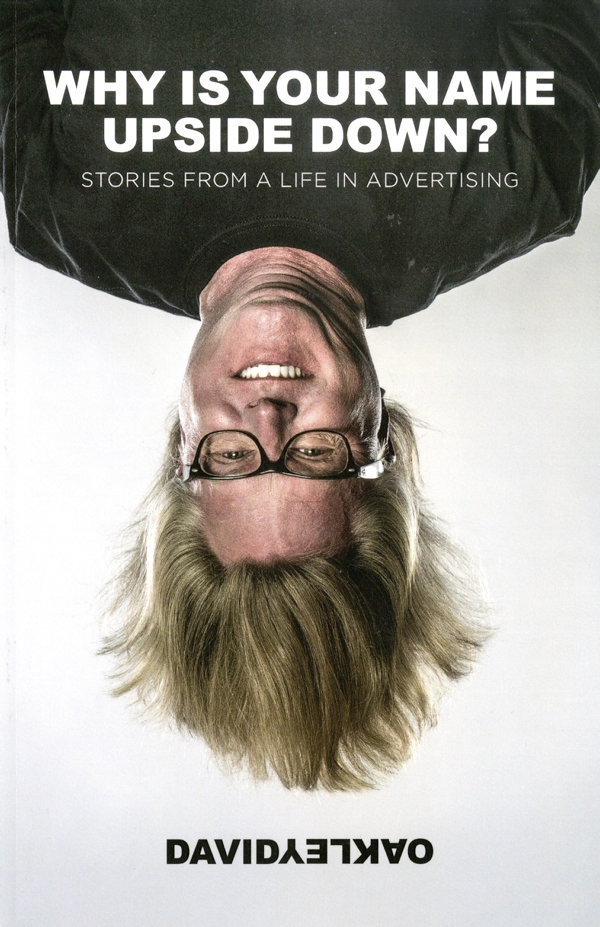 David Oakley will be right side up for his book signing Friday, May 1, 5:30-7:30 p.m. at Literary Bookpost, part of a celebration of independent booksellers.

Pretty much all you have to do to get David Oakley to tell you a story is say hello. He’ll take it from there.

This is a good thing because he collected a lot of his stories in a new book, “Why Is Your Name Upside Down? Stories From a Life in Advertising.” And in that title, you’ll find the other reason he’s good at telling stories — he’s in advertising. That’s all about telling stories.

In a conversation from the road back to Charlotte from Myrtle Beach, Oakley pointed that out. “We make up and invent stories about brands and companies. … It’s all about getting people to want to participate in whatever it is. We do that to make people want to get involved.”

His earliest, possibly most infamous story is about a billboard on I-485 in Charlotte. It was the 2000 election, and the billboard showed a picture of George Bush next to a blue background reading Al Gore 2000. The error made local headlines, then state, then national. Oakley and his then partner, John Boone, played it to the hilt, passing the buck along and promising it would be corrected. It was, by adding a banner that read “Today’s job opening: proofreader 123hire.com.” It was a slam dunk.

Oakley says he’s kind of like the guy at the bar telling stories.

“That’s what I do, end up telling stories over dinner or drinks,” telling people what he did and what he can do. “I wanted to have a collection of those stories. … What motivated me more than anything is I’m 50. Soon I’ll be 80. I gotta write this down.”

He says all the stories are true, with a few name changes. Some are “exaggerated just a bit.”

He likes to have fun with life. But he hates advertising. “It bombards you. You get 10,000 messages that are lame and you don’t notice it. It goes by you. We always try to connect with people.”

Oakley is a salesman with a heart, apparently. He has always journaled, has always written down his experiences. It is sort of cathartic to write things down.

“I like to write stuff. I had such a good experience writing the book, I’ve gotten good feedback. My friends have been very encouraging. I think I will write another book. It still takes a lot of time and energy.”

While he was writing, he first thought it would be aimed at up-and-coming advertising students who wanted a different perspective, but not a textbook. The first publishers who saw the book wanted him to make it more of a how-to manual. That didn’t seem quite right.

“Each story is a little adventure. It’s not that glamorous, but there are fun things. I’ve met some of the coolest people,” including singer songwriter Roseanne Cash, but you’ll have to read about that. It’s his favorite story.

With this book of hair-raising tales, sprinkled with salty advertising language, Oakley wants to reach people who enjoy a good story and want to be entertained.

Once he decided the book was not going to be a business/how-to book, publishers lost interest. He’d had two editors go over the work and help him tighten the stories, but it was hard for him to let go of it.

For three years, he had the idea to do this. One publishing company editor told him it would be a great 10-step breakthrough book, but Oakley thought there were already too many of those.

So he and his friend who helped with the book decided to self publish. “Let’s go the way you want to do it,” she told him. That was last March. A year of very obsessive work got it done.

“I’m really happy we got it done. It’s a really neat accomplishment, and I’m happy to share ti with people.”

He’s used to putting himself on the line and presenting big campaigns, but this one was different. “You think you’ve developed a thick skin, but doing this is so personal. It’s not a team, it’s you.”