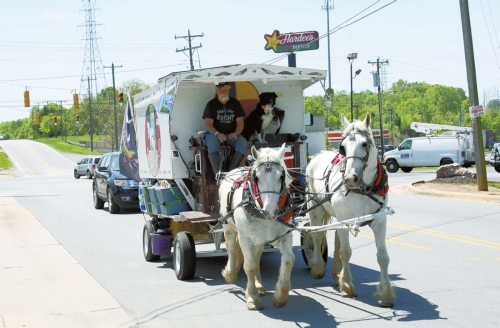 Mark Wineka/Salisbury Post Vietnam veteran Rodger Howell and his border collie, Banjo, rely on workhorses Sonny and Dancer to pull them across the country.

Rodger Howell spent most of his day in China Grove preparing to embark on another journey. This journey serves as part of his bucket list, in which he wants to travel cross-country using horse and wagon.

“What you dream about, you have to do,” Howell said.

Originally from Michigan, Howell is a Vietnam veteran who was exposed to Agent Orange. He was told in 2013 that he did not have much longer to live. In 2009, he had a double bypass surgery, and since then has received two stints in his heart and has had kidney trouble.

With his horses, Sonny and Dancer, and border collie Banjo, Howell has trekked from Tennessee to Michigan, Florida, and now, North Carolina. His trip took a short pause last year when his horse and wagon were hit by a tractor-trailer.

His wagon was revamped after the accident, adding mirrors for safety purposes and new solar panels. The solar panels assist in operating electronics, like being able to charge his phone. The wagon is his home, carrying all of his belongings from town to town.

“I don’t know how long I’m going to last. If you have faith, it doesn’t matter — just keep going,” he said. “Every day is a complete new adventure.”

Anthony Plzak, also a Vietnam veteran, happened to spot Howell on his way through China Grove. Together, they stopped for lunch at Hardee’s.

“If it wasn’t for my health, I would hop on with him,” Plzak said. “It’s so cool. You just don’t see this every day.”

Army Guard veteran Savannah King was eating lunch at Hardee’s when she spotted the wagon. She praised Howell for his efforts.

While he had lunch, several adults and many children stopped for pictures with the horses and to talk with Howell.

“If I can bring a little inspiration to their lives, then my job is done,” Howell said.

After a weekend stay at a local ranch, Howell will be back on the road. He aims to travel to Niagra Falls in the near future. “I’m not lost, I’m just making new trails.”

Kids say ‘Read to Me’ and Smart Start board…