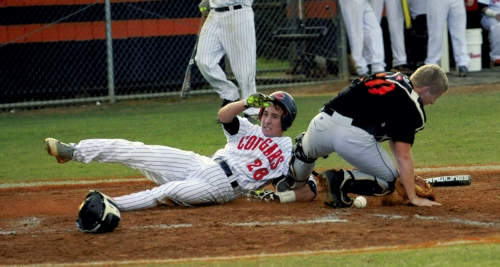 wayne hinshaw/for the salisbury post Carson’s Ben Shoaf scores a run during Friday night’s baseball game against Northwest Cabarrus, as the ball gets away from Trojans’ catcher Cody Whitaker. The Cougars won the game, 11-2.

CHINA GROVE — Carson beat Northwest Cabarrus, 11-2, on Friday, although it was more of a ball game than the score suggests.

Carson was in a scrap with the Trojans — clinging to a 4-2 lead in the bottom of the sixth inning  — until Heath Mitchem got back to doing what he does best.

Mitchem, a Catawba signee, is batting a scorching .531 this season, but after a first-inning base hit,  he made outs in the air in his second and third at-bats.

“I got away from who I am on those middle two at-bats,” Mitchem said. “But then I got back to thinking backside like I’ve done for the last four years.”

The strong lefty hitter drilled an 0-2 pitch down the left-field line for a bases-clearing double. Suddenly a 4-2 deficit had become 7-2 for Northwest Cabarrus, and then  the wheels came off. Owen White and Matt Saul followed with hits, and it was 11-2, before the sixth frame was over.

“We were close to getting out of that inning only down 4-2, and if we’d gotten a close call at first, we were out of it,” NWC coach Joe Hubbard said. “Then we make an 0-2 pitch too close to their best hitter, and the game gets away from us.”

Mitchem’s timely double was as much a momentum-changer as an intimidating dunk in basketball.

“Northwest battles at the plate and they make a lot of contact,” White said. “I had kind of a rough start, but then I started throwing strikes and letting my defense work.”

Two NWC mistakes gave Carson’s Michael Morrison an opportunity to tie the game at 1-all in the third inning with a sacrifice fly.

Carson (14-7, 9-5 SPC) took its first lead  in the fourth inning on Ryan Bearden’s RBI single. Then Tanner Christy’s sacrifice fly made it 3-1. White helped himself with a run-scoring single in the fifth that pushed Carson’s lead to 4-2.

“I was more nervous than our kids were, and the way we started out, I was sweating,” said Carson coach Chris Cauble, after his team stayed in a second-place tie with Cox Mill. “Northwest has been in most of their games, and this was a very tough game until the sixth.”

But Mitchem’s big double allowed everyone in the Carson dugout to relax.

“He’s definitely who we wanted at the plate with the bases loaded,” Cauble said. “That was a big win. Now our games next week are going to mean a  lot.”

Besides racking up another victory on the mound, White (6-1), who was relieved in the seventh frame by Kris Peacock, produced three of Carson’s 11 hits. There’s every reason to believe he’s going to be a two-way monster for the Cougars for years to come.

“Owen got stronger as the game went along,” Cauble said. “About the third inning, he kicked it in gear.”

Hubbard’s goal is to qualify for the SPC tournament. One of the league’s nine teams won’t make the eight-team bracket. NWC is battling Central Cabarrus for the No. 8 spot.

“We’re playing hard, but it’s not like we’re gonna bang the ball around the yard and score a bunch of runs,”  Hubbard said. “There’s no margin for error. We have to play just about perfect.”