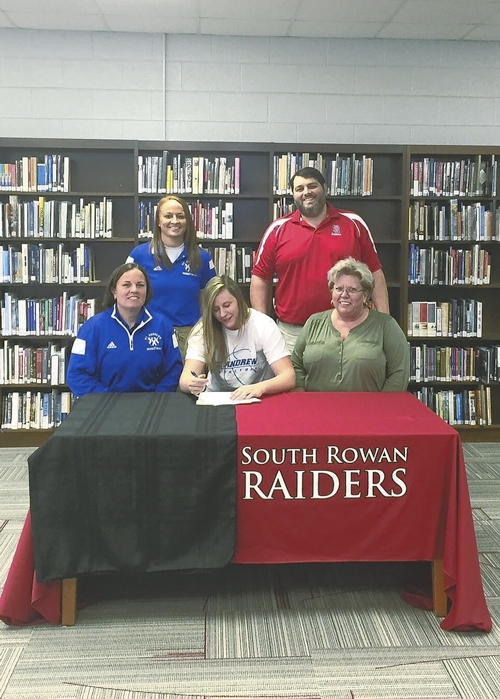 LANDIS — To fully understand South Rowan basketball player Cassidy Chipman, it is important to know that she boxes for fun and conditioning — mostly against guys — and she has knocked a lot of them to the mat.

“Oh yeah, plenty of times,” she says with a grin.

Chipman, the 5-10 senior swing player for the Raiders, is now taking her athletic toughness and determination to the next level on the basketball court. Surrounded by teammates, family, coaches and friends Friday afternoon in the school’s media center, Chipman signed a national letter of intent to play for St. Andrews University in Laurinburg.

“I honestly just love the coaches, the team and the school, ” Chipman said of her decision to sign with the St. Andrews Knights. She plans to pursue a degree in sports management and business in the process. “I look forward to just trying to do what I do best.”

What she does best, especially this past season, is score a lot of points, inside and out, and pull down almost as many rebounds. It is that type of consistent versatility that attracted the attention of the Knights’ third-year coach Brooke Johnson.

“She can really shoot but also put it on the floor inside,” Johnson said. “She will really add that piece for us that we have been missing. Coming in as a freshman, she is already as strong as some of our seniors. We are really looking for her to bring that versatility to the team and help us right away.”

St. Andrews, a four-year, coed liberal arts and sciences university, competes nationally in the NAIA as part of the Appalachian Athletic Conference. They are coming off a 16-14 season and will return nine players to go with four commitments, including Chipman. Johnson and assistant coach Megan Zullo were on hand at South for the signing ceremony.

What the Knights are getting in Chipman is a three-time, all-county performer with 1,132 career points who averaged 14.5 points and 10.1 rebounds this past season for the 18-7 Raiders. In 13 of those games, she posted a double-double in points and rebounds — topped by a 33-point, 16-rebound effort in a win over Carson last December. For her three-year varsity career, Chipman scored in double figures 56 times.

“I am just very proud of her for where she was when she got here four years ago to where she is now,” Raider coach Jarrod Smith said.  “Her overall growth in attitude and work ethic in that time has made her a very solid basketball player. She will help St. Andrews out and probably early on because she has that unique mixture of size and speed.”

Chipman and high scoring teammate Avery Locklear (UNC-Pembroke) were the one-two punch on a team of 11 seniors that captured the school’s first conference championship since 1999.

The SPC title, understandably, was her best memory of her prep career. “It was definitely winning the conference,” Chipman said. “It was something I’ve wanted since I came here, to hang a banner — and we did it.”

Staff report FOREST CITY — Will Albertson drove in four runs as Catawba crushed Anderson, 12-2, in the first round of... read more