Ashley Rae has a ‘Passion for Purity’ 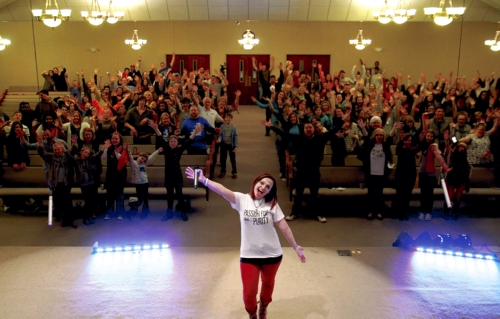 submitted photo Ashley Rae on state during Passion for Purity.

In most ways, Ashley Rae is a typical 20 year old. Loves candy, watching movies, down time, has a ‘chill’ personality, but at the same time loves makeup and fashion. Growing up hearing her mother sing in a traveling gospel group makes her feel that she has always been singing. She was harmonizing by age 7, took piano lessons briefly at 9, and began guitar lessons and writing songs at 10.

She went to Christian school from kindergarten through sixth grade and was then homeschooled until age 14, before going to the high school she would graduate from, Franklin Heights Christian Academy in Kannapolis. She feels the years there majorly impacted her life. She was going through a great deal personally at the time, but school became her safe haven, with caring teachers who prayed with her daily.

Jim Grigg, the lead pastor at Franklin Heights, instilled a ‘passion’ in her — by encouraging her to do big things for God. She took that to heart, and began to seek God’s will for her life. She felt led to pursue a personal life of purity, leading to the birth of the “Passion for Purity” ministry when she was 14. The ministry is based on Romans 12:2: “Be not conformed to this world, but be ye transformed by the renewing of your mind.”

Initially, the ministry focus was sexual purity, because Ashley shared her desire to use her teen years to focus on strengthening herself spiritually, and focus on becoming the woman of God she was created to be. She chose not to date just for the pleasure of dating, but believed dating should be handled with a purpose and she desired to save herself in every aspect for marriage.

God began showing her just what purity meant. “It is a heart issue,” Ashley states. “A mind, eye and mouth commitment. The focus of Passion for Purity is to encourage men, women, boys and girls to live pure lives, placing Jesus at the center.”

Six years later, her ministry has reached and touched thousands of all ages from across the country through sharing her story and leading worship at area churches, Facebook, Twitter, and Instagram. When her ministry started, she felt strongly that God was leading her to offer a ‘purity event’ in the area, and her vision was clear that the ministry would grow to offer purity events throughout the country. It has taken a few years to get to that, but in the years of waiting, a lot of groundwork was laid in the ministry.

Leading worship at Franklin Heights Youth for several years, being a guest worship leader and speaker at many other local churches, and currently leading worship at Ecclesia Church and Homestead Baptist Church Youth have all, along with social media, given her a large audience wanting to hear and understand about living pure lives. Ashley has written over 100 songs, but one of the most special ones to her is entitled, ‘His Scars are Enough.’ A teenage girl told her on Twitter that God had ministered to her through that song to stop ‘cutting’ and she now has a tattoo of ‘His Scars are Enough’ so she can be reminded.

The Passion for Purity event finally came to fruition the night of March 6, six years after the vision had been placed in her heart. Ashley’s work had been nonstop for months with her days of preparation beginning at 4:30 a.m. and lasting well into each evening. Advertising, venue, event schedule, practice schedules for drama teams, musicians, speaker, host, funding, videos, lights, photographer, stage layout, prayer team, registration, greeters, door prize donations….the list went on. She carefully selected more than 30 volunteers, making sure they included varied ages, experiences and backgrounds, all with different stories and testimonies to share, and who also felt passionate about purity in their lives.

She feels the diversity of her volunteer team strengthens the ministry, so that anyone attending an event could be ministered to by a volunteer who would understand exactly what they may be going through in their personal lives. Dramas were performed by CHAOS from Trinity Lutheran Church in Landis and by her own drama team, ECHO. Worship leaders along with Ashley Rae were Taylor Ford and Jordan Connell. The host for the event was AshleyDawn from InnerBeauty 101 ministries. The speaker was Charlie Cole, youth pastor at West Cabarrus Church.

Youth groups from churches in Rowan, Cabarrus and neighboring counties began entering Homestead Baptist Church where the event was held, but also families, individuals and groups of two or three. Coming together on a Friday night was a choice for most — not a requirement. You could see it on their faces — many ready to engage in worship, but also many seeking freedom from their brokenness, deliverance from unhealthy desires, wanting to be given hope, wanting the fire for Jesus back in their lives. Ashley states, “I just stood in awe at the beginning of the event that Friday night, totally amazed that so many were in attendance and that God had brought me to that point. Someone showed me a tweet from Britt Nicole: ‘Great event going on tonight at Homestead in Kannapolis, NC! Passion for Purity. Check it out if you’re in the area!’ I felt I was seeing God work right before my eyes. The night had really come and what God had shown me 6 years ago was all happening in His time.”

From the opening prayer, freedom was evident, and in each aspect of the evening, you could see ‘walls’ begin to fall in lives. Prayers, tears, lifted hands, praise, singing, hugs, laughter — all sent by God through his messengers on Earth. At the end of the evening, commitment cards filled out indicate the event had a strong impact on the more than 300 in attendance.

As the crowd thinned, Ashley stayed and talked individually with every young person that wanted to talk, and listened to many tell her about their newfound ‘passion’ for purity. And now, she still stands amazed every day as she continues to hear almost daily from someone that was ministered to that night.

What does the future hold for Passion
for Purity?

Ashley’s vision is to travel the country and host events. Since the Passion for Purity event, she has been contacted by ministries in the U.S. and Canada about speaking engagements and outreach ministries, including women’s ministries, prisons, hospitals and addiction and pregnant teen ministries. Writing is also a passion of hers, and she is beginning a devotional devoted to daily inspirations for living a Christ-centered life.