Winning the fight: Cancer survivors to be honored at Saturday dinner 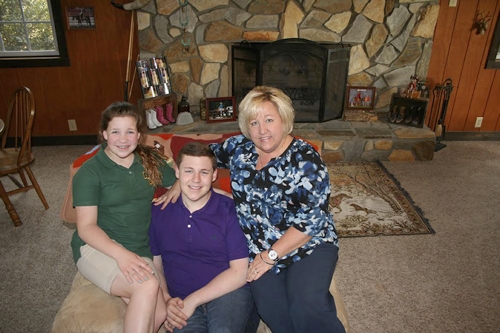 Preston Tadlock relaxes with his sister, Carleigh, and mom, Laura, at their China Grove home. Preston was diagnosed with cancer two days before his 16th birthday. Susan Shinn/For the Salisbury Post

Cancer survivors are all ages, from all walks of life. This weekend, they’ll be treated like VIPs — because they are — at a survivors’ dinner sponsored by Relay for Life. Next Friday evening, they’ll take a victory lap at the annual Relay for Life at the fairgrounds.

Their stories may be different, but each and every one of them is a survivor — and a fighter.

Here are two of their stories.

Tomorrow night, Preston Tadlock will attend his first dinner as a cancer survivor. One month ago, he was diagnosed with Hodgkin’s lymphoma. Two days later, he turned 16.

A sophomore at South Rowan High School, Preston and his family were out having dinner when he felt a lump behind his ear. Mom Laura and dad Carl both looked at it, and a cousin, who is a nurse, looked at it later that evening. Maybe it was just a lymph node. His pediatrician, Dr. Leona Beldon, gave Preston the option of doing a biopsy or removing it. Preston chose to remove it.

“It’s always there in the back of your mind,” Preston says of the wait. “But nobody thinks they have cancer. You think, ‘That can’t happen to me.’”

But indeed that’s what the ENT told Preston’s parents. When Preston came home from school on March 25, his parents were there, as were his sister, Carleigh, 12, and his aunt, Natalie Miller.

“I don’t really exactly remember what she said,” Preston says. “But it hit me, and I didn’t know what to do. I sat there for a second, and then I just broke down. It’s hard news to receive and process.”

Carleigh said it looked like someone had dropped a house on her brother.

As cancers go, lymphocyte-predominant Hodgkin’s lymphoma is the more rare type of the disease, but more treatable, Laura says. She is manager, customer/language services, in for the emergency care center at Carolinas HealthCare System Northeast. Carl works as operations manager in his family’s business, Frank Corriher Beef and Sausage.

But the family didn’t have time to sit around and mope. It was just before spring break, so they went to Gary’s Barbecue for dinner, and then headed to Carleigh’s cheerleading practice. She’s a competitive cheerleader with Elevation Cheer Co., and she had a competition later that week in Myrtle Beach, followed by show choir competition in Washington, D.C.

Preston liked having to think about other things. He helped his mom do a lot of the driving.

When they got home, Preston told friends and family about his diagnosis. Saying the words, “I have cancer” is very strange, he says. “You have that ‘Why me?’ feeling. It’s hard.”

Preston had a PET/CT scan, and “nothing else lit up, which was great news. That was really a pick-me-up.”

Preston’s cancer was diagnosed at Stage 1, and no treatment is recommended at this time. He’ll get another scan in three months and frequent blood work to continue to monitor his condition. The family will receive a primary opinion from the National Institutes of Health next week.

“Right now, we feel very good about it,” Laura says.

As for Preston, he’ll keep studying hard at school, and continue to participate on the swim team and in the varsity chorus. He takes piano from Marsha Carter and plays a little bit of guitar. He plans a career in medicine and hopes to be a neurosurgeon.

He’ll have quite a presence at Relay next Friday as well. He is raising money through the South team, and he and his family have sold more than 200 Team Preston T-shirts. Carleigh single-handedly sold 16.

And he’s excited about attending the survivors dinner with his parents, sister, aunt and his two grandmothers, Sue Tadlock and Bonnie Miller.

His two grandfathers, Frank Tadlock and Bill Miller, both had cancer. “It’s very strange to have cancer,” Preston says. “I took care of my grandfathers. It’s just very strange to think somebody would have to take care of me. When you’re young, you don’t want to feel like you’re a burden to people. I know this is a huge burden to people, especially my parents. You try to put on a brave face and just stay strong.”

“What has helped me is my support system with our family and church, and just trusting in God.”

“Preston has always been a fantastic kid,” says his pastor, the Rev. David Franks. The Tadlocks are members at First Reformed Church in Landis. “He is active in our church, and he’s a very mature and personable guy for his age. He’s just a genuine, authentic kid. For someone to be diagnosed with cancer at that age is a shock. But he’s taken it like a trooper. He has a God he is standing on and trusting in. It’s amazing how well he’s handled this.”

Preston’s on any number of prayer lists, and cards arrive daily in the mail, which he’s set up all along the kitchen counter.

“A lot of love has been poured out on this fella,” his mom says.

For the past decade, Peggy Earle has donated $10,000 a year to Relay for Life.

“I know it is,” Peggy says, with her characteristic dry wit.

Quite simply, she says, “It’s something I believe in. Somebody put that money in, and it helped me. I have been well blessed. I was cured.”

Peggy, 80, has worked for the state since 1975. She works from home as the manager for the N.C. License Tag Agency in Mooresville. Her daughter, Pam Morgan, is assistant manager, handling the day-to-day operations. Her son, Dean, and his family live right next door.

She still pops in occasionally to check on things. She does the taxes and payroll, and pays the bills and orders supplies. Although she’s been cancer-free for 15 years, a heart attack in 2009 and knee replacement in 2012 have slowed her down a bit.

Peggy invested the money from her job and from her mother’s estate, which has allowed her to be so generous. She is the top individual contributor to Relay.

Ironically, she won’t attend the dinner. Her sister-in-law, who lives out of town, is sick with cancer, and Peggy’s husband, Jerry, is going to be with her.

“I enjoyed the dinner and the Relay tremendously,” she says. “I took my husband and my daughter.”

Peggy says that no one wants to hear the word “cancer.”

She says she’ll never forget the day of her diagnosis.

“I had no earthly idea,” she says. Her gynecologist, Dr. Joel Goodwin, had found a knot on her breastbone, and sent her that day to get a mammogram. Twice, the results came back negative, but Goodwin knew something was wrong, and sent her a third time. That’s when they found a 1 centimeter tumor.

Peggy had a mastectomy, and went through eight rounds of chemo and 31 rounds of radiation.

“I never got sick,” she says. “I just went through with flying colors.”

During chemo, when she felt better, she went back to work. She drove herself from work to her radiation treatments.

Peggy never misses her annual mammogram. Married for 63 years, she and Jerry have three grandchildren and three great-grandchildren. Her daughter and a granddaughter will stay with her while Jerry’s out of town.

Even though she won’t be at this year’s dinner and Relay, she’s already thinking about next year, and hopes she can attend. Either way, she’ll still make her annual donation.

The Relay for Life survivors’ dinner is set for 5 p.m. Saturday at the First Baptist Church Ministry Center. That’s across the street from the church at 223 N. Fulton St.

For more information about Relay for Life, visit relayforlife.org.