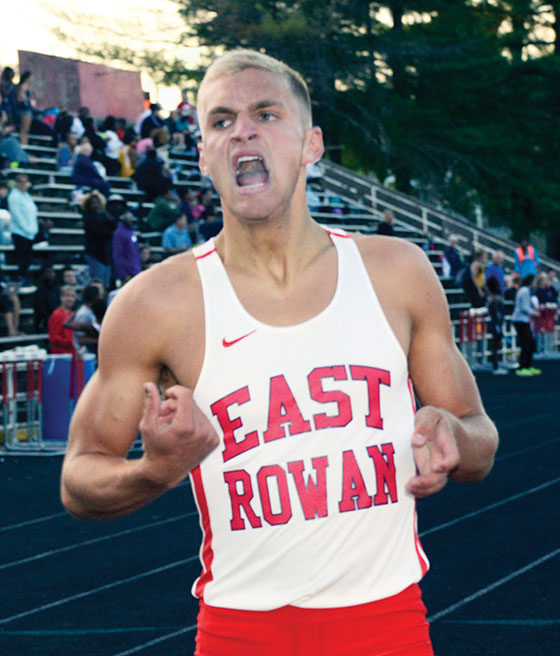 GRANITE QUARRY — There were no running point totals announced at Thursday’s SPC Championships, so even coaches were gnawing on fingernails.

Everyone knew the boys race was close between East Rowan, West Rowan and Carson, as runners, including the Mustangs’ 4-by-400-meter relay unit of Josh Little, Willie McCree, Devaniel Dale and Conor Honeycutt, prepared for the final event of a long evening.

The Mustangs disappointed opponents again, staging an unbelievable comeback in the 4×400 relay and adding their fourth straight conference championship to their four consecutive Rowan County titles.

“We asked all day for kids to step up, and these kids always step up,” East Rowan coach John Fitz said. “They knew we didn’t get some points where he usually get them, so they had to work for points in other places. They all picked it up.”

The Mustangs got only 31 points in field events, but their runners came through with 84 points.

Carson isn’t strong in sprints, but it had terrific individual efforts. Distance MVP Zachary Marchinko won the 1,600, placed second in the 3,200 and took third in the 800.

Marchinko was nipped in the 3,200 by Hickory Ridge standout Alex Cornwell.

Tyler Mason won the shot put for the Cougars in the two-day event and was second in the discus to Cox Mill’s Tommy Dawkins.

“I thought it might be the other way around,” Mason said. “It was a windy day and that hurt my discus, but I  know I can come back and win both events in the regional.”

“The 400 was a tough race (with Concord’s Austin Hernandez), but I ran the curves at 80 percent and then I pulled away from him on the backstretch,” Sanders said. “Those last 10 yards were hard, but I had enough left.”

East Rowan pole-vaulting phenom Marshall Shank started at 13 feet and didn’t clear a height. Lee Sharum won the pole vault for the Mustangs at 11 feet, while Honeycutt won the 800. The Mustangs chipped away across the board, as they always do.

“I was nicked up, but I put the pain behind me because the team needed me to,” Little said.

Football standout Willie McCree took the baton next. He was passed by Hernandez, the Spiders’ best 400 man.

“But I stayed close enough,” McCree said. “When I got it to Devaniel, I knew there was still a chance.”

Dale, the only junior on a veteran unit, ran a stout third leg, but when anchorman Honeycutt grabbed the baton and sped through the first turn, Concord appeared certain to win the race.

“Conor was 30 meters behind,” Fitz said.

Sanders, flying down the backstretch for the Falcons, blew past Honeycutt and into second place.

“He passed me, and at that point all  I was thinking about was how badly we needed to place second,” Honeycutt said. “I gave it everything I had, and then all of a sudden I saw yellow (Concord) in front of me.”

Concord was fading, and Honeycutt not only re-passed Sanders he moved into first place in the last 10 meters. Honeycutt, Little and McCree closed their careers on their home track with an improbable victory they’ll remember for the rest of their lives.

“Not many people get the chance to accomplish this,” Little said. “Four straight conference championships is amazing.”