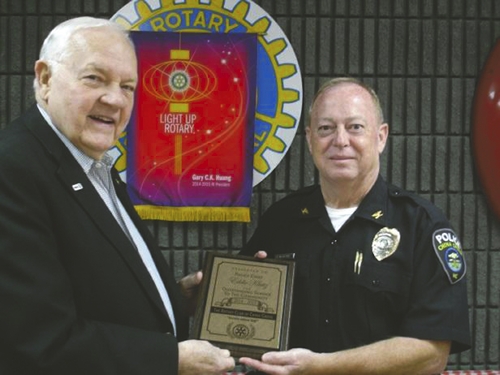 China Grove Rotary Club President Jim Morton presents the Service Above Self award to China Grove Police Chief Eddie Kluttz during a recent ceremony. Kluttz has been in law enforcement for nearly 30 years and is a military veteran. He received the award for giving spirit and service to the community. Submitted photo

CHINA GROVE — The China Grove Rotary Club recently presented Police Chief Eddie Kluttz with its Service Above Self award, given to a resident of the south Rowan area who stands out for service to others.

Kluttz, a self-described “kid from the mill hill,” is a China Grove native and has been the chief of the China Grove Police Department since November 2009 following his retirement from the Rowan County Sheriff’s Office, where he worked for 23 years.

The award, which shares its name with Rotary International’s motto, is given annually to a deserving individual.

During the ceremony, Roger Withers, longtime Rotarian and life-long friend of Kluttz, told the audience about Kluttz’s giving nature.

In his youth, Kluttz was known locally as a year-round baseball player and most agree that he could have had a career in the sport had law enforcement not come calling, Withers said.

Withers detailed one notable event early in Kluttz’s career where he quelled a potential riot in July 1979 involving the Ku Klux Klan and the Communist Workers Party. He’d only been with the China Grove Police Department for two months when the incident occurred.

Members of the KKK were inside the China Grove Community Building watching the movie “Birth of A Nation” when a group from the Communist Workers Party appeared outside demanding to get in and stop the movie. The young rookie cop stepped in front of the group and “calmly” dispersed the crowd. It was noted that some two weeks later, a similar incident in Greensboro resulted in gunfire between the factions resulting in serious injury.

Kluttz graduated from South Rowan High School in 1976 and worked at China Grove Cotton Mills from 1974 to 1976. He continued his formal education, receiving a degree from Rowan-Cabarrus Community College in 1986 and a bachelor of arts in police administration from Catawba College in 2003.

Throughout his career, Kluttz was selected by his superiors as Veteran Officer of The Year through the Rowan County Sheriff’s Office and the China Grove Police Department. He’s also continued to teach law enforcement courses at Rowan-Cabarrus Community College.

An 18-year-old Kluttz enlisted in the N.C. National Guard and served with distinction until 2007, when he retired with the rank of first sergeant. During these 31 years, Kluttz was deployed two times to Desert Storm and Operation Enduring Freedom in the Middle East. He received numerous decorations, honors and accolades during his military service career. Withers said a variety of military educational courses have contributed to his unique ability to relate to a broad cross section of citizens and solve incidents before they escalate to greater problems.

Rotary Club President Jim Morton, who presented Kluttz with the Service Above Self award plaque, said he “epitomizes the true meaning of the Rotary motto” and emphasized how fortunate China Grove is to be on the receiving end of the chief’s dedicated service.