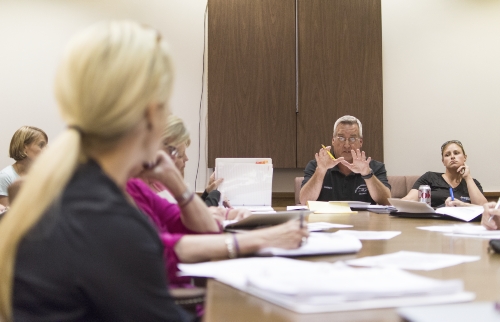 The Rowan County Animal Shelter Task Force focused a majority of its attention Thursday on creating a volunteer program that would allow community members to perform small tasks.

Meeting for the first time Thursday, the task force selected three areas to focus on in what’s expected to be a three-meeting process. Members of the task force agreed to start gathering information on drafting a volunteer program, an increase in the adoption fee to pay for vaccinations and software to aide in the animal shelter’s operations.

“You have to learn to work within parameters and within legal limits,” said Jane Hartness, a task force member. “Sometimes our emotions, as animal people, take over. One of the hardest things for a volunteer to do is to temper their emotions and to realize that if you are truly working together for the sake of animals, you are going to work within the confines of the law and what your county allows.”

Animal Shelter Director Clai Martin initially expressed hesitation during the meeting about allowing volunteers into the shelter. He read from a list of experiences submitted from other shelters in North Carolina. Some of the comments he read stated volunteers often don’t commit to a predetermined schedule, require supervision and make allegations of misconduct against county employees.

Martin agreed that a volunteer program could work if the number of initial participants was significantly limited — three was used as an example. All of the task force members agreed that certain tasks, such as cleaning, would have to be performed by county employees who were trained.

Tracy Waugh, a community member on the task force, said creating a volunteer program was critical to ensure that the adoption rate continues to improve.

“If these animal groups stopped tomorrow, stopped their programs, stopped raising funds, stopped posting on social media and stopped networking with all of the different rescue groups, then the statistics would jump right back up,” Waugh said.

When discussing various priorities for the task force, Pierce proposed increasing the shelter’s adoption fee by $5 — bringing the total fee to $75 — and earmarking revenue generated by the increase for vaccinations. He asked Martin and the community members on the task force how an increase might affect adoption rates, which have been improving steadily in the past several years. Martin said the increase wouldn’t have a significant impact. The community members on the task force said they weren’t sure how a $5 increase might change adoption rates.

“I know it would save a whole lot of vet bills,” said Barbara Hart, a community member on the task force.

The task force sets its next meeting for May 7 at 5 p.m., in the county’s administration building. Pierce said the second of three meetings would be to start developing a set of recommendations to make to the Rowan County Board of Commissioners, which would ultimately have to approve any suggestions made by the task force.

By Josh Bergeron josh.bergeron@salisburypost.com A measure that would increase penalties on drivers that pass school buses advanced once step closer to final... read more