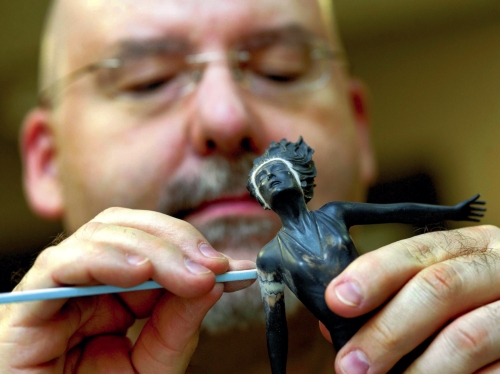 JON C. LAKEY / SALISBURY POST George Witter, from Winston-Salem, has been spending recent years on the plastic models of figures. Witter works on the female character from the 1950s movie, “Creature From the Black Lagoon.” Members of the International Plastic Modelers Society meet regularly to exchange ideas and build models.

SPENCER —For the most recent meeting of the Arm/Air Chapter of Rowan County, President Sid McLendon asked members to bring some of the plastic models from their “stash” at home.

The random examples brought in filled a long table at the club’s meeting room at the Spencer Fire Department. There were tanks, cannons, military aircraft, cars, warships, superhero figures and science-fiction characters from movies.

There was even a model of President John F. Kennedy sitting in the Oval Office.

One of Tony Bean’s contributions was a handsome shadow box that contained his father’s dog tags, service-connected ribbons and a scale model of the helicopter used for the ocean rescue of astronaut Alan Shepard after he made the first manned U.S. flight into space on May 5, 1961.

Bean’s father was a wingman on the helicopter that picked up Shepherd after his splashdown, so the model helicopter was a special build for Bean.

Among other things, Sam Morgan brought two different scale models of German Messerschmitt planes from World War II. He had them sitting on mirrors so you could see some of the details underneath, down to the wiring and hydraulic lines.

“There’s a lot of work there, from one of the best modelers in the country,” McLendon noted.

The chapter members had a nice chuckle when Scott Denson explained why a naked woman was strategically  drawn on the nose of one of his F-105 Vietnam fighter planes. From his research, Denson said the woman was painted where the fuel connections were, so airmen would be more focused in their refueling duties.

“All of us share a passion,” Morgan said of this International Plastic Modelers Society chapter founded in 1973 and the second oldest in North Carolina.

“It’s such an exciting hobby, You can really be consumed by it. … We’re kids who never grew up.”

The men and women who build plastic models have certain traits. They’re patient, curious, imaginative and almost always history-minded. They simply like to build things — detailed things — and their tools of the trade are, well, whatever works.

They’re apt to wear optic visors for magnification and rely on high-intensity lamps to give them the light they need for the intricate detailing.

The plastic models might take two weeks or two years to put together.

The Arm/Air Chapter meets twice a month at the Spencer fire station — at 1:30 p.m. on the first Sunday and 7 p.m. on the third Friday. McLendon might open a meeting by asking if anyone wants to share what they’re working on.

The meetings also might include a demonstration. At this particular meeting, the modelers had a workshop on resin casting and molds.

Otherwise, the members work quietly on their models of the moment and trade information and ideas. Refreshments might include sandwiches and drinks, and there’s a lot of good humor to go around.

A cocker spaniel named “Bear” is a frequent guest.

“It’s loose,” McLendon said.  “Formalities are out the window with this group.”

Foster, a Marine whose models today are usually related to U.S. armor, is still with the group. He built his first plastic model — a car — when he was 7 years old, and that was 60 years ago.

Morgan joined the chapter in 1974, because as a kid, Saturdays for him were about going to the movies and building model cars.

“We’ve generated quite a few national winners over the years,” said Morgan, who is one of them, “but the main thing that’s kept us together for so long is that we have fun building models and try to spread that enthusiasm to others.”

That energy extends to beginners of any age, he added.

The local modelers’ group was first known as the “Checkertail Chapter” in honor of John Freeze of Mooresville, a former maintenance chief with a U.S. Army Air Corps P-51 squadron that had been based in North Africa in World War II.

Many of the original members were building military aircraft at the time.

The Checkertail Chapter held its first convention in August 1974, making it the first IPMS convention ever held in North Carolina. The chapter will be holding its 20th convention Oct. 17 in Salisbury, though it has been 14 years since the last one.

The men first met at the Hobby Shop in Salisbury, then the Chartreuse Caboose. The chapter’s name changed to IPMS Arm/Air in 1977, when members seemed evenly divided in their interests between armor and aircraft.

For many years, the modelers’ group was as strong as the hobby shops they supported. With the disappearance of independent toy stores and hobby shops, few young people know anything about scale models and, likewise, have no clue the Arm/Air Chapter exists.

“The hobby has really taken a nosedive,” Morgan said, but at the same time, those still following their passion find it to be a golden age for building because of the information available and the ways to communicate with enthusiasts across the world.

Morgan said if he needs a photograph or line drawing for some aspect of the model he’s working on, he usually can find it quickly through the internet or in the many technical manuals available with the more expensive kits.

One great aspect of the local chapter is that members often travel together to the regional and national competitions, besides taking fact-finding field trips to museums and air shows to make sure details on their models are correct.

“We’ve had a lot of fun and gone a lot of places,” Morgan said.

His uncle got him started on plastic models when Bolick was 9 or 10 years old. When his grandfather was making a trip into Salisbury to pick up something at the hardware store, Bolick would tag along so he could spend time at John Spencer’s Toy Store.

He would take whatever money he had earned from mowing lawns and buy a model. His first model was a tank, then he went to car models.

To Bolick, the Chartreuse Caboose was nirvana in his early modeler days. Now 54, he said he likes to attend the Arm/Air Chapter meetings twice a month to share knowledge and tell stories.

“It’s a good therapy, and the things you can learn from each other are invaluable,” Bolick said.

He personally spent a year building an M26 tank retriever, which won first place in a regional competition. “You almost become a part of it when you’re doing the research,” he said.

The volumes of information available now on the internet can be a blessing and a curse, according to Bolick. “You can take it to the extreme,” he said.

Morgan is currently working on two British Centurion tanks, paying attention to details such as their water cans to make the tanks competition quality. One is to 1/35th scale; the other, 1/76th scale.

Morgan uses a proportion wheel to make sure everything fits to scale. The Centurion tanks were employed in Korea and Vietnam before eventually being sold to the Israelis and playing roles in the Six Day and Yom Kippur wars, according to Morgan.

There’s a lot of history associated with the models, McLendon said.

But there’s also room for fantasy. Nearby, George Witter was intent on building from a kit his “Creature from the Black Lagoon.” He specializes in figure models.

Also in the room was Thomas Stewart, 11, a national winner in his age group for his model of R2D2 from Star Wars.

“I don’t try to compete,” the young Stewart said of his philosophy in building anything. “I just do it, because it’s fun.”

Thomas, his 15-year-old brother, Zachary, and their father, Don, have recently gotten into building models from paper, including a full-scale card model of R2D2.

“It adds a different dimension,” Morgan said of this newest trend.

And the old-school modelers will tell you, that’s OK.