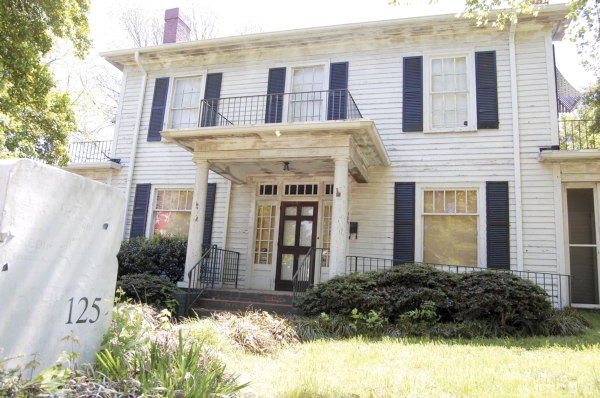 The historic Marsh-Ward house on North Fulton Street could be demolished if a compromise is not reached between its owner, St. John's Lutheran Church, and the Historic Salisbury Foundation.

By The Rev. Rhodes Woolly

This fall, St. John’s will open a new 29,000-square-foot addition for contemporary worship and youth ministry. As is true with all of our facilities, the new space will be well used by a variety of congregational ministries and community groups, serving as host to more than 3,000 such gatherings annually. We value our presence in downtown Salisbury and celebrate yet another way we can be a dynamic presence in our local community.

As we look forward to its grand opening, we look toward another unique opportunity for the congregation and community: the creative use of the large “green” lot at West Innes and North Fulton streets. In 2006, the congregation purchased the former K-Town furniture building/lot on West Innes Street and the adjacent North Fulton Street house occupied by the Bijoux Dress Shop for many years. Both properties had fallen into disrepair. While future options were being considered, the K-Town building was razed and leveled and turned into a lovely green entryway into the downtown community.

What remains is the Bijoux House at 125 N. Fulton St., a structure the congregation is offering at no charge to anyone who is willing to move it. In an attempt to find a good solution, the structure was offered to the Historic Salisbury Foundation as long as it could be moved to a more suitable residential lot, perhaps one of the lots owned by HSF on North Fulton Street. The offer has not yet been accepted. The city has zoned the Bijoux House as a mixed-use, DMX lot. It is not in a historic district, nor are there historic covenants on the house.

Additionally, the Bijoux house has structural issues that make it cost-prohibitive — and frankly, poor stewardship of our resources — to return it to a usable state, which is why we are eager to partner with a local group or individual eager to move the house and rehabilitate it. In the absence of a willing partner, demolition is being considered as a viable option because the structure has become a financial drain on the congregation. If you are interested in the Bijoux house and would like to move it, please let us know by contacting the church office at 704-636-3431.

The properties represent the last piece of contiguous property St. John’s owns. A team of congregation members and community members is exploring creative options for an overall plan for the property — a plan that meets the needs of the congregation and takes seriously the needs of our downtown community. Because of 56 employees among our schools and church staff, weekday parking is a significant issue and is being considered as an option, although a complete plan has not yet been developed.

St. John’s has a long been a part of the heart of downtown Salisbury. Throughout our 268-year history, we have tried to be a valuable community partner, albeit one with a very particular mission: to advance the gospel of Jesus Christ. Our stated values include a rich appreciation for collaboration, community partnerships, and historic preservation. Our track record shows just that in myriad ways. But we are not in the business of property management, nor do we want to be. We do want to be good stewards of our resources and a good neighbor/partner in downtown Salisbury. If we continue to spend dollars on the Bijoux building, we are less able to use those dollars toward a mission we feel called to pursue.

One final thought: In order for a downtown to be vibrant, there must be people. Downtown Salisbury Inc. brings hundreds of people to downtown for First Fridays every month. Local businesses welcome customers throughout the week. Downtown churches, including St. John’s, bring hundreds of worshippers here each Sunday morning. With the opening of our new space, we will continue to be a dynamic gathering place, not just on Sundays, but every day of the week. We look forward to those expanded opportunities.