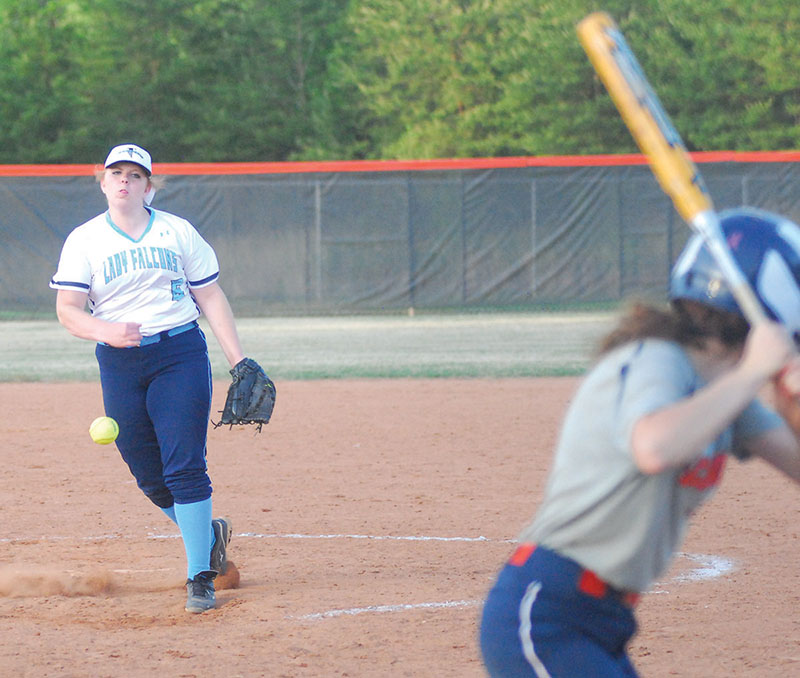 That’s because the Falcons picked up their second South Piedmont Conference victory in as many days Tuesday when they smothered host Carson 10-0.

“That’s two great games back-to-back,” winning coach Jimmy Greene said after second-place West Rowan (11-4, 9-3) kept pace in the clogged league standings. “East Rowan hit the ball on us (Monday) night, and I was stressing. We won 5-4, but the tying run was on second or third and the winning run was on first when the game ended. It was as close as could be.”

This one wasn’t. West Rowan rode the golden right arm of winning pitcher Peyton Greene — the coach’s junior daughter — and banged out 12 hits in a stress-relieving win.

“It’s just that confidence thing,” Peyton Green said. “The team had my back. It’s kind of hard to stop once you get going.”

Greene was magnificent in the circle. She pitched a complete-game 4-hitter, struck out 12, walked none and retired 18 of Carson’s last 20 batters.

“We couldn’t hit the ball,” coach Suzy Williams said after Carson (7-5, 7-5) continued its up-and-down season. “Peyton’s a great pitcher, and we knew that coming in. We just weren’t aggressive against her. We watched too many pitches go across the plate.”

West Rowan jumped ahead 2-0 in the top of the first against losing pitcher Lacee Hunsucker. Senior Hunter Gibbons (4-for-4, three runs scored, two RBIs) got the party started when she legged out an infield hit with one away. Then freshman Parker Greene — Peyton’s kid sister — skipped a run-scoring double past Carson’s left fielder for the game’s first run. Two batters later Peyton Greene ripped a two-out single that made it 2-0.

“I started out struggling this season,” said Gibbons, West Rowan’s shortstop. “It’s something that gets in your head and you can’t let it go. But tonight I felt focused and just relaxed in the batters box.”

West Rowan tacked on single runs in the third and fourth innings before cracking the game open in the sixth. Taylor Martin triggered a five-run uprising with a two-out, RBI single that bounced into center field. Gibbons slashed a double over the right-fielder’s head for another run and an infield error made it 7-0. Catcher Marissa Yow, a strikeout victim her first three times at bat, crowned the inning with a towering, two-run homer that cleared the left-field fence.

“Last year she hit five for me, so the power is there,” said coach Greene. “Her first three times up she didn’t want to bunt and was worried about not putting the ball in play. She’s so intense. And for her to recover and hit it hard like that, I was so proud of her.”