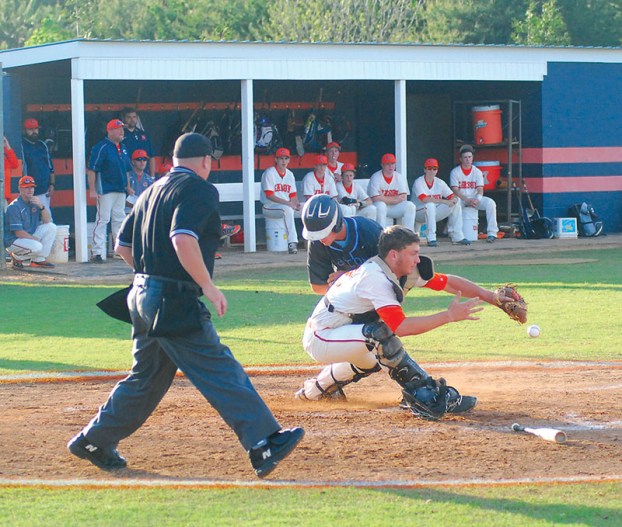 ADAM HOUSTON / SALISBURY POST West Rowan's Kacey Otto (15) runs into Carson's Ryan Bearden (12) in a play at the plate Wednesday in a South Piedmont Conference game at Carson. Otto was called safe on the play. The Falcons won 4-3.

CHINA GROVE — The two hottest teams in the South Piedmont Conference squared off at Carson Wednesday night and fittingly it came down to the final at-bat.

West Rowan pushed across an unearned run in the top of the seventh then turned to its ace to make it stand in a critical 4-3 win over the Carson Cougars.

Falcons pitcher Omar Bautista came on in the bottom of the seventh to preserve the win for starter Austin Love after he issued a leadoff walk. Brandon Mock’s sacrifice bunt moved the tying run into scoring position for Carson, but Bautista struck out Ben Shoaf then got Brycen Holshouser on a come-backer to end the game.

“I knew they were going to sacrifice so after that I just focused on getting the outs and the win,” Baustista said as he notched his second save. “Austin did an amazing job and kept the ball down. We are just climbing the ladder trying to get one win at a time.”

The senior right-hander has a 4-1 record as a starter and a minuscule 1.85 ERA.

The surging Falcons (13-5, 9-3 SPC) have won five in a row and more importantly have won six straight SPC games to take command in the second half. They now hold a one-game lead on Cox Mill and two games on Carson with three regular-season contests left. The Cougars (13-7, 8-5 SPC) saw their seven-game winning streak snapped with the tough-luck loss.

Carson put up three runs in the early innings and led 3-2 in the top of the sixth behind starter Heath Mitchem. But with one out Falcon big first baseman Juan Garcia (2 for 3) cranked a long solo homer to left to tie the game.

Carson appeared to be off the hook when pinch hitter Hunter Bernhardt hit a sharp grounder to first. But the ball bounced off Mitchem’s glove and caromed far enough away to allow Atwood to race home with the lead run.

“It was hit real hard and kind of skidded,” Mitchem said. “It hit off my hand and hit the one spot on me that let it bounce away. We have just got to out this behind us because it is just one game and we have some important ones left.”

After the leadoff walk in the bottom of the seventh, Love agreed it was time to give way to Bautista to save it.

“I was getting tired so it was the right call,” he said.

West Rowan coach Seth Graham said the pitching set up just the way they wanted in the end.

Carson coach Chris Cauble praised the long starting stint he got from Mitchem, normally a closer, and his defense, especially Mock in left and Shoaf at third.

“It was a knock-down, drag-out game and was played the way it was supposed to be played,” Cauble said. “I told the team they can’t hang their heads over one game because we have some big ones left to play.”

Carson returns home Friday to face Northwest Cabarrus while West is also at home against Concord.