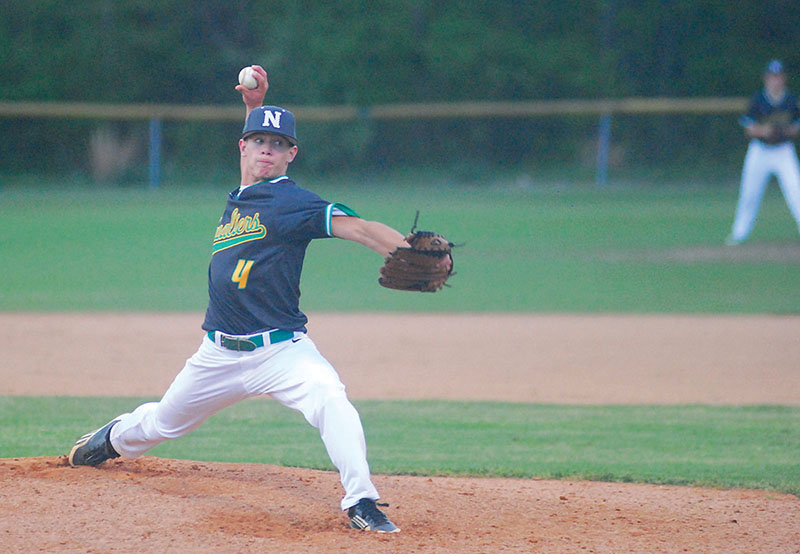 SPENCER — It wasn’t the first rodeo for West Davidson senior Justin “Lefty” Freeman, and when he had to make a critical pitch he did in a 10-3 victory at North Rowan that kept the Green Dragons unbeaten in the 2A Central Carolina Conference.

The pivotal moment came when North Rowan (8-8, 4-2 CCC) loaded the bases against Freeman in the bottom of the third. When Freeman walked No. 9 hitter Cory Fries on a close pitch to force home a run, the Cavaliers trailed 3-2. The next man up was hard-hitting leadoff man Corbin Smith, and he had a chance to do damage and create momentum.

But experience is as much a part of Freeman’s game as the fastball he can spot on the inside corner.

“My heart was pounding, but I was able to make quality pitches in a tough situation,” Freeman said. “I came in on him with fastballs, and then I went soft outside and he swung right over a pitch for the strikeout.”

North Rowan wasn’t helpless against Freeman, who is headed to Louisburg, and put up a fight for a long time.

Behind pitcher Noah Gonzalez, North Rowan led 1-0 going to the fourth, but that’s when the Green Dragons scored three times. Two runs scored on a deep fly ball off the bat of Kyle Smith that went over the head of retreating left fielder Javin Goodine.

“There were the two key plays,” North Rowan coach Aaron Rimer said. “That first big hit they had and then the strikeout with the bases loaded. We had our chances, but we just kind of dug holes all night offensively and defensively.”

North Rowan managed single runs against Freeman in the third, fourth and fifth. Smith singled home Harrison in the third, Goodine scored on Fries’ walk in the fourth, and Rob Monroe singled in Jake Pritchard in the fifth.

Harrison relieved Gonzalez in the fourth and ran into more trouble in the fifth. West Davidson (14-1, 6-0 CCC) loaded the bases on two walks and a catcher’s interference before Daulton Anderson delivered a two-run single for a 5-2 lead.

“Noah pitched excellent, and I wish I could’ve backed him up better,” Harrison said. “Their pitcher had great control. They also had better approaches at the plate than we did and they just hit the ball better than we did.”

Leading 5-3 in the sixth, the Green Dragons filled the bases on a walk and two bunt singles. Holden Lanier’s two-run double to the center field fence finally broke open the game. Then West Davidson tacked on additional runs with aggressive baserunning.

“That’s kind of the way we play,” West Davidson coach Jerry Walser said. “We just feel good to get out of here with a win. This was a really tough ballgame for a long time, and we beat a team that battled us on every at-bat.”

Caleb Baugess pitched the seventh for the Green Dragons, as Freeman took a well-deserved vacation as the first baseman.

Lee Sells finished up on the mound for the Cavaliers, who were minus two left-handers. Ace Brandon White has a knee injury, while Henderson Lentz has a foot injury.

North Rowan had seven hits, including doubles by Harrison and Pritchard and a seventh-inning triple by Goodine, but this game belonged mostly to Freeman.

“Justin’s got a lot of composure,” Walser said. “That composure usually rubs off on the rest of our guys.”