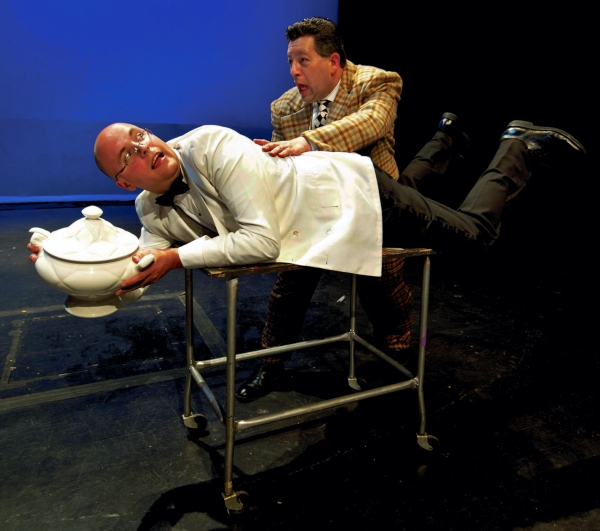 Ben Thomas, left, as Alfie and Catawba College President Brien Lewis as Francis Henshall in Piedmont Players production of ‘One Man, Two Guvnors.’ Lewis has been acting since his youth, but this is his Salisbury stage debut. Jon C. Lakey/Salisbury Post

Over the past few months, Catawba College President Brien Lewis has rekindled his love for theater.

When he isn’t going to meetings, presiding over college events or making public appearances, Lewis has been studying lines, blocking scenes and discovering the character of Francis Henshall from “One Man, Two Guvnors.”

Lewis will take center stage in Piedmont Players’ production of the show this week and next.

While this is Lewis’ theatrical debut in Salisbury, he isn’t new to the stage.

“I’ve been doing theater stuff pretty much since I was a kid,” he said, explaining that he performed throughout high school and college. He’s even been in several community theater productions, as well.

“It’s an itch I have to scratch every once and a while,” Lewis said.

Juggling his job as Catawba College’s president and preparing for the show has been a challenge, he said.

“The days get a little longer and the free time a little shorter,” he added.

Because of time constraints, acting isn’t something he could do regularly, but Piedmont Players’ “One Man, Two Guvnors” seemed to be the perfect opportunity to fulfill that craving. It was the right combination of timing and the show itself.

“This is not high intellectual fare,” he said. “It is lowbrow, British farce.”

“In some ways it’s a very challenging piece,” Lewis said, adding that the show is “driven by timing.”

“There’s a lot of improvisation in this show,” he said. “No show will be exactly the same twice.”

“It takes a lot of work to make it look easy,” Lewis added.

“He’s not particularly bright,” he said.

When the play begins, Francis is down on his luck. He was just fired from his position as a washboard player in a skiffle band, and is desperate for a job.

When he does land a job, he ends up with two and spends the rest of the play trying to keep his two employers from meeting each other and realizing he works for the other.

His plight puts him in a variety of sticky situations as he tries to maintain his positions for his two different bosses.

“If you’ve always wanted a chance to laugh at me, here’s your chance,” Lewis said, adding that he didn’t specifically audition for the role of Francis.

Having performed in a British farce show before, however, Lewis knew it would be fun, regardless of the role he received.

“I guess he (Reid Leonard) saw what he was looking for in Francis,” Lewis said.

Being on the stage allows him to “channel things in a way you don’t regularly allow yourself to,” whether it’s exploring a more dramatic side or indulging in silliness, he said, adding that there’s a satisfaction in being able to create something.

“It’s just fun to be able to do something that you wouldn’t do in your eight to five life,” Lewis said.

The cast of “One Man, Two Guvnors” is a “neat group,” Lewis said, adding that the people are his favorite part of the show.

An international company is planning a move to Rowan County’s Airport after commissioners on Monday approved an agreement to build an office... read more