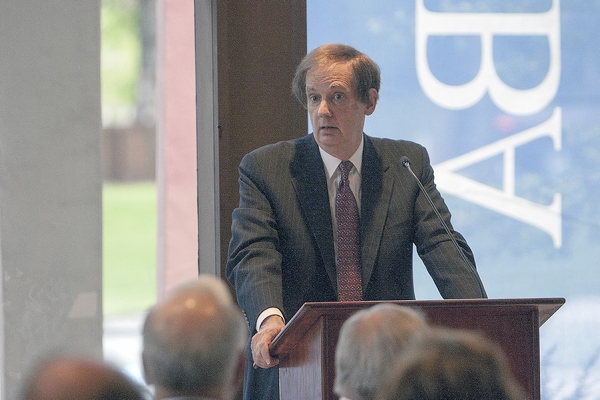 Catawba alumnus and trustee Richard “Dick” J. Seiwell Jr. was honored by his alma mater on April 15 as the 2015 recipient of the college’s prestigious Adrian L. Shuford, Jr. Award for Distinguished Service.

College President Brien Lewis made the presentation to Seiwell, a graduate of Catawba’s class of 1967, during a special President’s Circle event held to recognize the institution’s major donors in Peeler Crystal Lounge of the Robertson College-Community Center.

The Adrian L. Shuford, Jr. Award is presented annually to individuals whose actions and generosity to both the college and their communities emulate those of the late Adrian L. Shuford Jr. of Conover, a businessman and a long-serving member of the college board of trustees. The President’s Award for Distinguished Service was first presented in 1983, but in 1984, the award was named to honor Shuford and in recognition of all he had done for the college.

As he made the presentation, Lewis shared with those gathered that Seiwell “helps manage the college’s investment portfolio with very good success. Dick’s donated effort in managing our investments would cost the college around $385,000 a year if we were to outsource it or if he were to charge us for it, but he does this pro bono.  This is indeed a remarkable ongoing gift of expertise and stewardship.”

Seiwell, a member of the Catawba board of trustees since 1986, chairs that board’s finance committee, has chaired its endowment committee, and is a member of its investment sub-committee. He was honored by the college with its Distinguished Alumnus Award in 1999 and inducted into its Ketner School of Business Hall of Fame in 2010.

A native of Pennsylvania and the son of Catawba alumni the late Rev. Porter Seiwell (a longtime Catawba College chaplain) and wife Maria, Seiwell graduated from the college with a degree in business.  He earned his M.B.A. from Ohio State University in 1968.

He served in the U.S. Army Reserve from 1968 until 1974.  In 1977, he became a chartered financial analyst and has worked as a former partner and director of research for Cashman, Farrell & Associates, Inc.

He serves as director and chair of the investment committee of New Covenant Trust Co. and as an adjunct trustee of the Presbyterian Foundation.  Married to wife Linda, the two are parents of two adult children and make their home in West Chester, Pa.

Lewis described him as “a generous, civic-minded individual who knows he has been blessed and believes in paying it forward.”

He has long been a supporter of Catawba’s Campus Ministry and its Lilly Center for Vocation and Values. He and other family members established a Retreat Ministry Fund and an Endowed Scholarship Fund in memory of his parents.