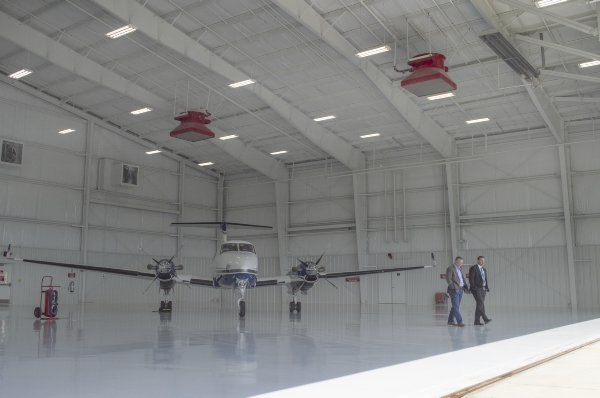 Josh Bergeron /Salisbury Post Rowan County Commissioners Chairman Greg Edds and Airport Director Thad Howell walk through a hangar that will be leased to a charter company currently based in Statesville.

An international company is planning a move to Rowan County’s Airport after commissioners on Monday approved an agreement to build an office next to the airport’s largest hangar and provide other monetary assistance.

For months, the board of commissioners discussed the matter in closed session, but formally announced on Monday that Strategic Moves Aircraft Management would move its headquarters to the airport.

Strategic Moves describes itself as a private on-demand charter company. It has locations in both Carolinas; Virginia; Colorado; British Columbia, Canada; and Finland. Currently based in Statesville, the company would lease a hangar — just completed last year — and 4,200 square feet of office building from county government at a price of about $7,000 per month. Strategic Moves owns about a dozen small aircraft and would locate five of its planes at the Rowan County Airport.

Strategic Moves President Steve Setzer wasn’t available for an interview, but said in a new release that it was immediately apparent Rowan County was the right location for his company headquarters after discussions started about the move.

“They understood that growth is the key to prosperity for everyone,” Setzer said. “Their commitment to growth and to the county is what sold us on moving. The commissioners and I believe that the ability for businesses to be able to fly in and out of the Rowan County airport will attract other companies and more business to the county.”

Rowan County government committed $50,000 in “up-fit assistance” to help with the transition. County Manager Aaron Church said the money would include fixtures, such as a hazmat shower, inside of the hangar. Church said the county has also committed to paying the entirety of the cost for the 4,200 square foot office building, which Church said could cost $600,000 to $750,000.

As a part of the agreement approved Monday, Strategic Moves will be charged a lower markup on gasoline after meeting certain, pre-determined amounts.

Strategic Moves would be the largest single, private company at the airport, according to Airport Director Thad Howell.

Commissioners Chairman Greg Edds said the company’s location in Rowan County would add 15 to 17 jobs to Rowan County landscape. Edds said he wasn’t able to comment on whether the jobs would be employees moving from Statesville or new hires.

“This is going to do three important things,” Edds said. “They’ll lease space, both office and hangar space, which will pay for the actual facility itself. Then, they’ll purchase fuel, which helps us run the airport. They’ll also pay property taxes on equipment and planes, which helps us further develop the airport and pay for the things that we all value.”

Edds said no determination has been made about the start or end date for construction. However, he said the planning phases of construction has begun.

The economic announcement on Monday is a first for Edds. Discussions began shortly after Edds became chairman. Previous announcements included negotiations that began before Edds was chairman.

When asked about the significance of the announcement, Edds credited Commissioner Craig Pierce, who served as a liaison to the airport advisory board when the hangar was built.

The airport’s staff and advisory board is currently seeking to build several new, medium-sized hangars. Howell said the airport has enough space available to build several more hangars, including one of a similar size to Strategic Moves’ future location. He said the largest hangar was previously used by transient aircraft looking for shelter from weather conditions. With the lease, Howell said the most immediate demand is for hangars that would function in a similar manner.

Editor’s note: this article has been updated to correctly reflect the terms of a lease between the county and Strategic Moves Aircraft Management.