Accident causes SUV to land on top of another car 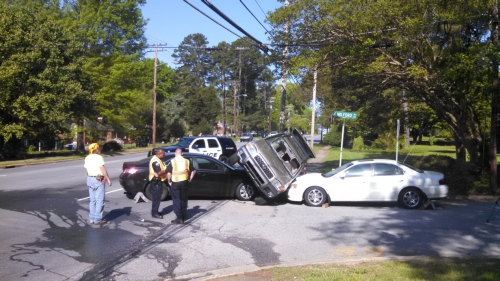 No serious injuries were reported after a three-car accident Thursday morning on Statesville Boulevard.

The accident happened shortly after 9 a.m. Bystanders said it appeared a black Toyota Camry was trying to cross Statesville Boulevard from South Milford Drive and hit a Nissan Pathfinder, which tipped over onto a car waiting at the stop sign on North Milford Drive.

The driver of the Pathfinder was taken to the hospital as a precaution. Traffic was halted in both directions on Statesville Boulevard while a tow truck pulled the Camry out from the under the Pathfinder, which was simply pushed back onto its four wheels.