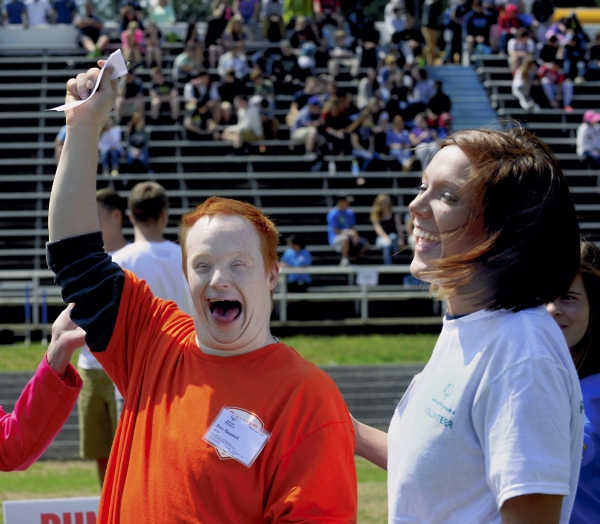 Eric Seawell celebrates getting his participation ribbon at the Rowan County Special Olympics held at West Rowan High stadium. His "Buddy" for the day on the right is Catawba student Kelly Kchhumacher. photo by Wayne Hinhaw, for the Salisbury Post

Glasby, an athlete in Rowan County’s 2015 Spring Special Olympics, was nearing the end of his 200 meter race and had taken the lead heading into the final stretch. Glasby would later say he was running so fast that his shoes caught on fire.

He said reaching the halfway mark of the race is his favorite part.

“I was thinking I was coming for first place,” he joked. “I was probably going 100 mph.”

With every race, including Glasby’s, the crowd noise grew immensely as competitors neared the finish line. A noticeable increase in speed among athletes coincided with the increased crowd noise, perhaps propelling Glasby to a first-place finish in his heat of the 200-meter race.

Less than 15 minutes later, he scored his second first place award in the shotput event.

The focus of the Special Olympics, however, wasn’t winning. Most competitors didn’t seem concerned about getting a first-place award. Following individual heats, competitors would walk to an awards table and be presented with a ribbon, colored to correspond with a specific placement in the competition. Blue, for example, represented first place.

Some competitors celebrated after with any placement. Others were happy just to finish the race.

“The Special Olympics give the athletes a chance to showcase their abilities rather than their inabilities,” said event coordinator Jesse Byrd.

“Without the volunteers, the event wouldn’t happen,” he said. “We have 300 volunteers that came out to give their time and help. We’ve got civic groups, Livingstone, Catawba College and the schools definitely help out.”

The Special Olympics began just after 10 a.m. on Tuesday and continued into the afternoon. The competitions also included long jump, softball toss and a 100-meter race.