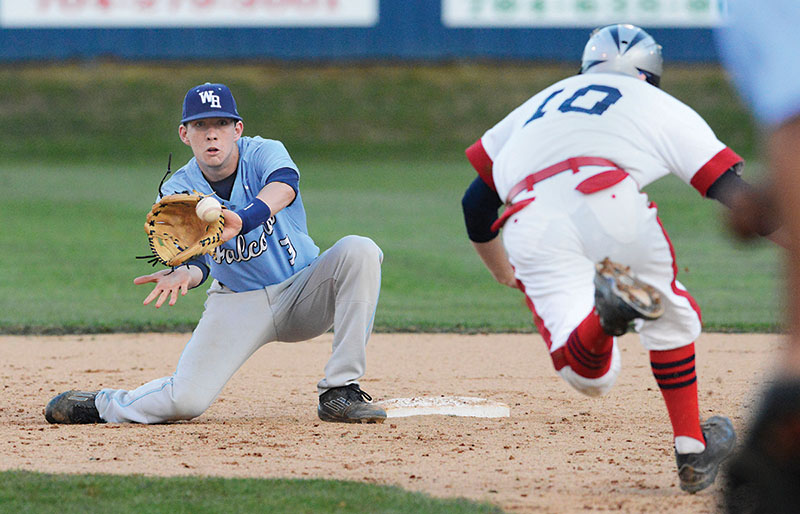 Photos by Wayne Hinshaw / For The Salisbury Post ABOVE: West Rowan’s Jeremy Simpson (3) takes the throw before tagging out East Rowan’s Ike Freeman (10) on an attempted steal of second base.

GRANITE QUARRY — Some expected West Rowan baseball coach Seth Graham to hand the ball to Omar Baustista on Tuesday because Bautista had already shut out East Rowan in Mount Ulla.

Instead, Graham turned to left-hander Bryan Ketchie and watched Ketchie pitch like an ace in the rematch with the Mustangs. Ketchie turned in a Bautista-like effort, getting ahead of just about everybody with 18 first-pitch strikes and leading the Falcons to a 3-0 victory at Staton Field.

Joseph Peeler, headed to UNC Wilmington, was tough on the mound for the Mustangs. He went the distance and struck out eight, but Ketchie was even better.

“A lot of people don’t know about Ketchie, but he’s been this good all season,” Graham said. “We just stuck with our normal rotation. It was Ketchie’s turn. He got the job done.”

Ketchie struck out five and didn’t walk a batter. The only time he looked hittable was in the bottom of the first when Ike Freeman (groundout), John Owen (double), Samuel Wyrick (lineout) and Jackson Justus (groundout) all hit the ball squarely.

“The first inning is always my worst,” Ketchie said. “But then I settled down. After the first inning, I pitched my game. It was big for us to beat East Rowan twice in one year.”

Ketchie (3-1) found his curveball in the second inning. The Mustangs never mounted a serious threat the rest of the way.

The Falcons got two runs in the first after loading the bases with none out on an error, Jeremy Simpson’s single and a hit batsman. Peeler hit Kacey Otto with a pitch to force home a run, and Lee Poteat’s sacrifice fly made it 2-0.

“Peeler’s curveball wasn’t working in the first inning, and he hit some guys,” Simpson said. “But then he settled in.”

Peeler is 3-3, but his team hasn’t scored in his any of his losses. He gave the Mustangs every chance to rally, putting a zero on the scoreboard five straight innings before the Falcons finally added insurance. In the seventh, Peeler hit Caleb Link with a pitch and wild-pitched him to second. Baucom’s single up the middle knocked in Link.

“Peeler’s velocity really picked up after the first inning and he was tough on us,” Baucom said. “But hats off to Ketchie. He pitched a heck of a game for us.”

Baucom had two of West Rowan’s five hits. Poteat had a sixth-inning double for the Falcons, but was thrown out on a nice relay trying to make it a triple.

But Ketchie, who got 10 outs on the ground, was the story.

“It’s fun playing behind a guy like that,” said Simpson, the Falcons’ shortstop. “He’s throwing strikes, and it’s just one groundball after another.”