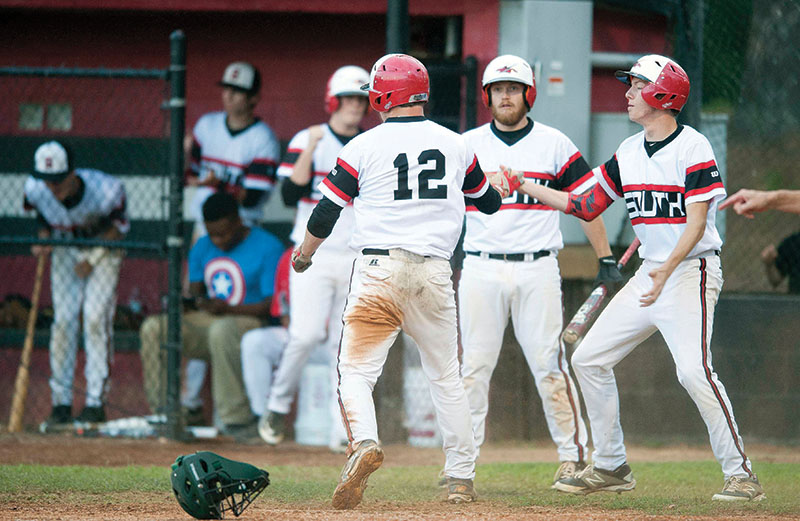 LANDIS — Finally, some good news from the South Rowan corner.

“We’re 1-0,” coach Thad Chrismon said after South Rowan (12-6, 8-5) reclaimed its place in the crowded conference race. “We’ve started a new season. That’s how we’re looking at the rest of the schedule. It’s a four-game season and we just won the first one.”

They won it with two outs in the bottom of the seventh inning, thanks to heads-up baserunning by Corriher and teammate Tyler Rary, who scored from second base on the game’s final play.

With the score tied and right-hander Brandon Fair on the mound for Central Cabarrus (4-13, 2-10),  Rary dropped down a well-placed bunt to the left side and easily reached first base. With two outs Rary stole second and Ryan Ashworth coaxed a walk, putting two runners aboard. That brought up Corriher (2-for-5 with three RBIs), who steered a grounder to the right of Vikings second baseman Jake Rowden. The freshman fielded the ball cleanly but slipped backward, then threw late to first-baseman Bryson Biddy.

“Our second baseman made a great play but lost his footing,” said Central Cabarrus coach Ronnie Bost. “And with a speedy runner coming around, we didn’t get it there in time.”

It was a terrific hustle play that set off a mild celebration outside the South Rowan dugout.

“It’s a really good feeling,” senior Eric Stowe said. “We fought as a team, played as a team and had much better approaches at the plate.”

Never was that more apparent than in the last of the fourth. Trailing 5-1 against Central starter Riley McGee, the Raiders scored five times with two away. The first crossed when Ashworth drew a bases-loaded walk. Corriher followed with a sharp, two-run single up the middle that made it 5-4. Then with runners at second and third, Stowe — who went 3-for-4 with a pair of loud doubles — lined a two-run single into center field that gave South its first lead.

“The first pitch he threw me was a curve in the dirt,” Stowe said. “The second was a fastball, and I was thinking backside to get the runners in.”

An inning later Ashworth fought off a pitch from Fair and muscled a two-out, run-scoring single to center for a 7-5 South edge. Central rallied with single runs in the sixth and seventh innings before South ended three weeks of frustration in its final at-bat.

“Nothing comes easy in baseball,” Chrismon said after South scored all of its runs with two batters retired. “And two outs doesn’t get you out of an inning, whether you’re in the field or at the plate. You can do a lot of things if you just focus on getting hits.”

Sophomore Walker Joyce was the winning pitcher, despite facing just two batters and inducing a groundout and a swinging strikeout.

“The difference tonight was we didn’t give people opportunities to beat us,” Chrismon said. “We’re trying to get back to the way we’re used to playing. We want to be hungry. I don’t think you put pressure on yourself when you’re hungry and trying to prove yourself.”