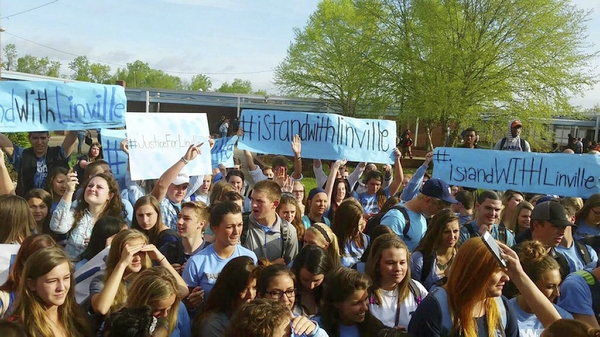 About 30 students were suspended for taking the protest into the school’s football stadium after they were told not to.

Linville, a math teacher and assistant football coach at the school, was suspended without pay and charged with assault after an altercation with a student Thursday during class.

The 15-year-old student was given a juvenile referral for disorderly conduct.

Support for Linville has been overwhelming. “Justice for Coach Linville,” a Facebook page started Friday is quickly approaching 3,000 likes, and the hashtag, “IStandWithLinville” has been used hundreds of times on social media platforms such as Instagram and Twitter.

“He was a really good guy,” said Principal Jamie Durant said, adding that the number of students who participated shows how many students he “impacted as a teacher, a coach and a mentor.”

Bailey Woodey, a senior at West Rowan, said students decided to organize the rally to “show him support.”

“He really makes you look forward to coming to class,” she said.

Woodley said she took classes with Linville twice, during her freshman and sophomore years.

“He’s the person who makes you smile,” she said. “He’s just a really good person.”

“I don’t know anyone who doesn’t like him,” Woodley said. “We really are on his side.”

She added that the student involved in the altercation has a track record of disrespecting teachers.

The students initially planned to meet in the football stadium, but Durant met with several student organizers and told them they couldn’t meet there due to preparations for Special Olympics tomorrow. They were allowed to meet in the school’s courtyard instead.

Students gathered, waving banners with pro-Linville messages. Several students took time to talk to the group, and led a prayer for Linville and his family.

The school’s freshmen were in an assembly during the rally. By the time they were released, the rally was over.

Some had no idea the location had been changed or that the rally was over. Others knew, and decided to go anyway.

A group of students, about 30 in all, decided to go down to the football field.

“The football gate is always open,” Laraway said. “We jumped the fence because we’re allowed to go down there.”

Those who jumped the fence at the football field were given a one-day suspension, Laraway said.

She said the students wanted to show Linville they had his back. “That’s what being a Falcon is all about.”

“A large number of West Rowan High School students engaged in an orderly protest prior to school this morning in support of Mr. Linville,” said Public Information Officer Rita Foil in an email. “We respect their right to express themselves and we are proud of how the majority of our students conducted themselves in a peaceful, responsible and orderly manner.”

“There were a few students that violated school rules and they were disciplined in accordance with the district’s Code of Conduct,” she added. “No student was suspended or otherwise disciplined for his or her support of Mr. Linville.”

According to a press release from the Rowan County Sheriff’s Office, the 15-year-old student took a school-issued laptop from Linville’s desk Thursday and tried to walk out of the classroom. Linville blocked the student from leaving and told him to return to his seat.

The student pushed Linville, “at which time Mr. Linville picks up the student and pushes the student into a metal cabinet, and finally then throws the student to the floor,” the news release said.

Linville has been an employee of the Rowan-Salisbury School System since August 2009, and had not had any discipline issues prior to this incident.