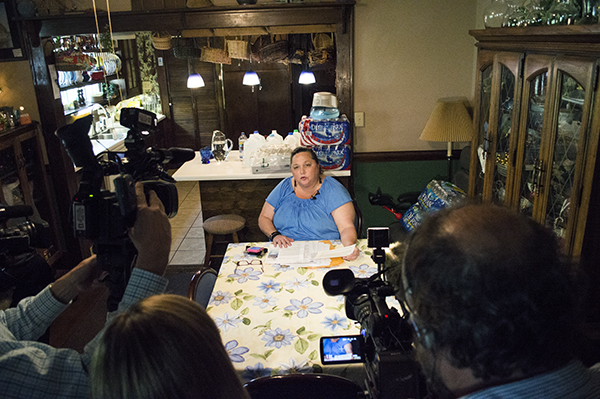 Deborah Graham, a resident of the Dukeville community, speaks during a press conference on Tuesday inside of her home. Graham received a letter on Saturday warning her not to drink her water.

DUKEVILLE — Deborah Graham said today her quality of life is forever changed after receiving a letter from the state on Saturday warning her not to drink water from the well on her property because it contains toxic heavy metals.

A number of other residents in the community near Duke Energy’s Buck Steam Station and its coal ash dumps got the same letter, stemming from tests that occurred two months ago.

Graham’s letter was dated April 16. The tests were conducted in February.

Graham said that until she got that letter, she had been drinking water from the well.

“I haven’t been concerned about it because Duke Power … sat right here at this table less than a year ago and told me my water was safe to drink, she said at a news conference.

Graham and other Dukeville residents are represented by the Wallace and Graham law firm in Salisbury.

State officials are advising an undisclosed number of residents near Duke Energy coal ash dumps not to drink or cook with water from their wells after tests showed contamination with toxic heavy metals.

A law passed after last year’s spill into the Dan River required the North Carolina Department of Environment and Natural Resources to sample wells within 1,000 feet of Duke’s 32 coal ash dumps.

The Associated Press obtained letters sent to 19 homes and a church near Buck Steam Station in Salisbury advising people not to consume their well water. Several of the letters cite high levels of vanadium, a naturally occurring element found in coal ash classified as hazardous by federal health officials.

State environmental officials have refused to comment on how many families are affected statewide.

In response to the news, Duke Energy sent the Salisbury Post a lengthy statement. It reads in part:

“In the last few days some neighbors near North Carolina coal plants who participated in recent private well testing have received a letter from the North Carolina Department of Environment and Natural Resources explaining test results for their well.

“Many well owners across the state have water with some substances at levels higher than the state’s groundwater standards. Elements such as iron, manganese and vanadium are common in North Carolina wells and typically are caused by the rocks and soil in the area.

“Based on the state’s test results we’ve reviewed thus far, we have no indication that Duke Energy plant operations have influenced neighbors’ well water. Boron and sulfates at certain levels are key indicators of groundwater potentially impacted by coal ash, because they migrate more quickly than other trace elements. Neighbor wells in this first batch of testing did not contain these substances at elevated levels.”

A representative from the Southern Environmental Law Center attended today’s news conference and said the organization has filed lawsuits against Duke Energy in state and federal courts.

Motorcyclist leads police from Salisbury to Rockwell on high-speed chase

By Shavonne Walker shavonne.walker@salisburypost.com A motorcyclist took police on a high-speed chase for miles, wrecked his bike and finally was... read more