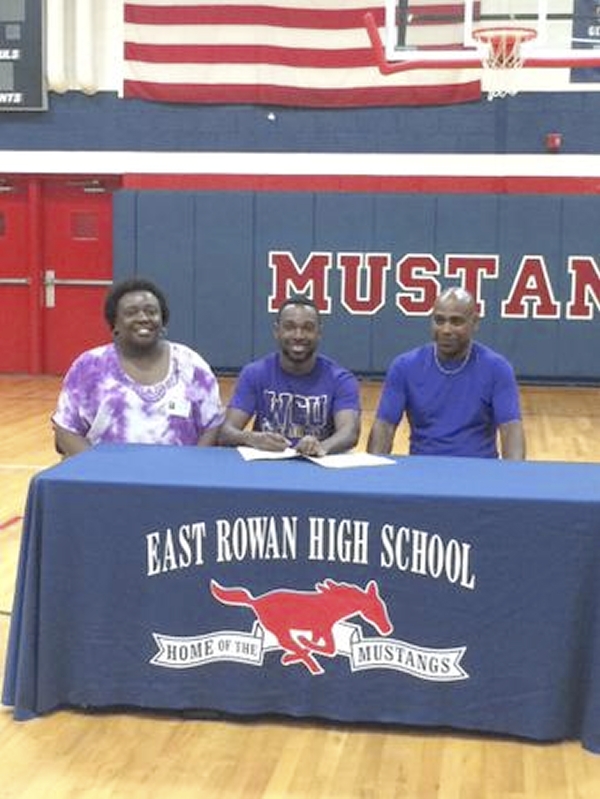 Especially in the home meets, the Mustangs continue to run with a purpose for Jamey “Big Daddy” Ledbetter and Cody Ludwick, a coach and an athlete who died when the current seniors were still at Erwin Middle School. Ledbetter and Ludwick are gone, but their memory stays strong through stories told by Rick Roseman, the “retired” guy who re-energized the program a decade ago, and assistant Barry Justus.

As recently as 2003, East Rowan’s boys track team had eight members and the Mustangs finished last in every meet.

Now they win. The current seniors have won four straight Rowan County Championships and three straight conference titles, and they’ll go for No. 4 when they host the SPC Championships on Wednesday and Thursday.

One of the Mustangs to watch will be senior sprinter Josh Little. Little always impacts four events. He runs with emotion as well as talent, and he signed a National Letter of Intent with Western Carolina University last week.

“Western Carolina wasn’t really on my map, but then they extended a hand to me,” said Little, who will study exercise science.

Little was overjoyed when he visited Cullowhee. He feared that when he graduated from East Rowan he wouldn’t experience the sort of camaraderie at the college level that he enjoyed with the Mustangs.

“Western’s coaches showed me the same kind of atmosphere we have at East,” Little said. “They’re winning a lot of championships there, but it’s still always about the team.”

Little likes to win his solo races as much as anyone, but he shrugged off not having his best personal day in the Rowan County Championships last Tuesday. He placed second to West Rowan’s Jaylon Sanders in the 100 and 200, but he helped the Mustangs win the 4×100 and 4×400 relays. He was the common denominator for two winning units — flying with Keith Tillman, Max Wall and Tre Gillespie in the 4×100, before striding with Willie McCree, Devaniel Dale and Conor Honeycutt in the 4×400.

“I slipped coming out of the block in the 100 (on a wet track), and just couldn’t make it up,” Little said. “But you can’t let that affect how you run the rest of the day.”

Little has fast genes. He said his personal record for 100 meters is 10.93  seconds,  but his father, James, who competed at West Montgomery High, had a best of 10.82.

Little took third in the 3A indoor state meet at 55 meters earlier this year in 6.52 seconds.

“It was toward the end of my sophomore year and I was running with teammates like (Lenoir-Rhyne football’s) Calvin Edwards and (Catawba football’s) Donte Means,” Little said. “That’s when I started realizing I could be really fast.”

John Fitz is in his first year as East Rowan’s head boys track coach. Little has been everything he heard he was as a runner, and he’s been impressed with the work ethic he brings to the field daily.

“I’m new, but Josh is coachable and has always listened to what I’ve had to say,” Fitz said. “He’s improved this year because of the hours he’s put in. Every volunteer Saturday workout, he’s been here. Every day over spring break, he practiced. He’s a leader in everything he does …  just a great kid to be around.”

The Mustangs are preparing for another challenging meet in the SPC Championships. Besides West Rowan and Carson, they’ll be battling talented athletes from good teams such as Hickory Ridge, Northwest Cabarrus and Concord.

The Mustangs know they’ll get everything Little has in his two legs in four events.

“Josh has been big for us in every big meet for four years,” Roseman said.