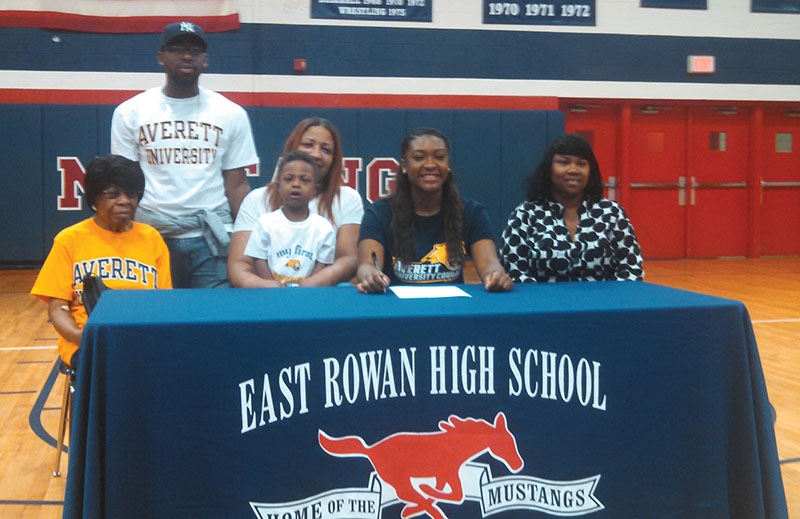 The 5-foot-8 Ajayi had 14 rebounds when East Rowan won 62-56 against North Rowan in the 2014 Sam Moir Christmas Classic at Catawba. Those rebounds helped the Mustangs win the tournament for the first time since 2001.

“The last few minutes in a tough championship game, and she was getting every rebound,” Porter said. “That’s the Amani I’ll remember.”

Ajayi hopes to enjoy more clutch performances as a college player. She will continue her education and basketball career at Averett, a Division III school in Danville, Va. Averett can’t give athletic scholarships, but it recruits good athletes who are great students. Ajayi fits that description. She’s receiving $60,000 over a four-year period in academic scholarships.

Ajayi got interested in basketball because of her brother, Phillip, an athletic guard for the Mustangs for three seasons from 2007-10.

“Phillip was really good, a better player than me,” Ajayi said. “But I tried hard to play like him.”

Ajayi tried to juggle cheerleading and basketball. There was a time she traveled to Georgia determined to play in a basketball tournament and do some cheering as well.

“I wanted to do both,” Ajayi said. “But that’s when they sat me down and told me I had to make a decision. I chose basketball.”

It’s worked out. She played varsity for three seasons for the Mustangs and scored 418 points. She played with two of the top scorers in East Rowan history — Karleigh Wike and Kelli Fisher  — and she did things that helped them score.

Ajayi’s career high was a 17-point outing as a junior against Salisbury. As a senior, she scored 16 points three different times. One of those 16s came on a 7-for-7 shooting night against Northwest Cabarrus.

“She played different positions and could play whatever role we needed her to play depending on the matchup or foul trouble,” Porter said. “There was a lot of growth to her game from her freshman year to her senior year. We had good teams the last two seasons (44-8), and she was a big part of that. She was the glue for us.”

Ajayi’s favorite game came late in her career. East Rowan survived a draining, first-round overtime game against North Henderson at home in the 3A state playoffs, but didn’t have much time to enjoy it. The Mustangs were headed to the mountains to play Canton Pisgah the next day. They won again — 71-63 in a packed gym.

Ajayi scored three points at Pisgah. That she lists it as her favorite game says a lot about her. East Rowan won. That’s all that mattered.

Ajayi, who plans a career as a physical therapist, has had Averett near the top of her list since coaches saw her play last summer.

“They were excited when I visited,” Ajayi said. “I played in a pickup game with the girls. I know I’ll fit in.”

East Rowan girls have experienced great success in the Division III ranks, most notably Tracy Croner at Guilford and Brittany Cornelius at Meredith. Ajayi could be next.

“She’ll have a chance to play a lot for them,” Porter said. “I think she’s a steal for Averett.”