Brett Austin off to great start for Kannapolis Intimidators 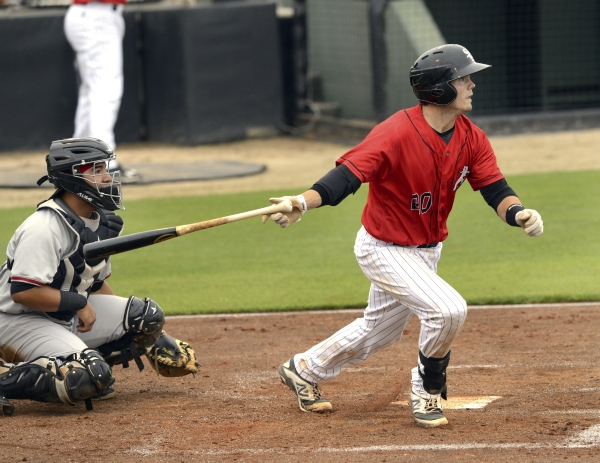 Wayne Hinshaw/For the Salisbury Post Kannapolis Intimidators’ catcher Brett Austin in 2015 (right) was off to a hot start with the bat. The former N.C State standout began the season 12-for-25, including three triples. Austin also excels in handling the young Kannapolis pitching staff.

KANNAPOLIS – As he embarks on his second season as a key member of the Class A Kannapolis Intimidators, Brett Austin has a quite a few responsibilities and expectations. Hitting a slew of triples to open the season was not one of them, but it was a welcomed bonus.

The 22-year-old catcher is back in Kannapolis to start 2015 after playing 42 games here last season. Austin was drafted in the fourth round out of N.C. State last summer. How long Austin stays at this level is unknown but while here he is expected to improve his defense and power, manage a young pitching staff and provide leadership in the dugout.

Austin has above average speed for a catcher but hitting three triples in the team’s first eight games has earned him some friendly ribbing from the dugout.

“After the third one (April 15 in Delmarva), I was laughing, rounding second,” Austin says, “because I knew I was going to get a hard time from the guys.”

Hitting triples at any level is not a planned event, rather it is a quick decision that is made somewhere around second base. “It just happened to work out,” said Austin.  “I got perfect placement of the ball, then it is all on you to make the read and the right decision.”

While Austin had five triples at NC State, he had not recorded one as a professional until April 10 in a 4-3 win at Lakewood. The first three-bagger came in the top of the second inning, then he powered another to right field in the top of the sixth. “I think the outfielder fell down a couple of times, bobbled it and then tripped,” said Austin with a wink and a grin.

What is does say about Austin so far this season is that he is making good contact and being highly selective with the pitches he attacks. Through 10 games this season, the switch-hitter is leading the team with a torrid .480 batting average (12 for 25) and has five RBI to go with his trio of triples.

Austin, 6-1, 190 pounds, is a native of Matthews, graduating from Providence High before spending three highly successful years at N.C. State. The years with the Wolfpack included a 2013 trip to the College World Series in Omaha.

Austin was half of a deadly Wolfpack battery with lefty flamethrower Carlos Rodon, the top overall selection by the Chicago White Sox in the  2014 draft. Austin went 108th in the fourth round and his sincere vision is to one day reunite with Rodon and his other White Sox teammates in the major leagues some day.

“I have no control over that other than to come out here every day and do the best I can,” Austin noted.

Rodon meanwhile, started the year at Triple A Charlotte, after a stellar spring training, and received the call-up to the major league club effective April 20, initially out of the bullpen. “I take full responsibility for him (Rodon) shooting up the line as fast as he has,” says Austin with another wink and a nod. But there may be some element of truth in the statement since Austin is very adept at managing his pitching staff on the field.

“I think for any catcher, you have to figure out the pitching staff, how to handle each guy individually,” Austin said. “Every pitcher is a little bit different. Some guys you have got to get on them and some guys you have to baby a little bit. It is definitely a difficult task, especially with your pitch-calling, because what works for one guy might not work for others.”

So far this young season, the Intimidators have experienced feast or famine. Through Saturday, they were struggling with a 4-6 record, but two of those wins were shutouts, including a stellar, 11-strikeout, two-hit gem by lefty Jordan Guerrero on April 15.

In two appearances (12 innings) this season, Gurerrero has yet to give up a run of any kind, while fanning 11 batters.

“Guerrero, in his last outing, was really good,” Austin added. “Everything I put down, he would throw and I didn’t have to move my glove much. When you pitch like that it makes the game really fun.”

If Austin keeps his young pitching staff in a groove and continues to crank out a few more triples for himself, there should be a lot of fun games for the Intimidators at CMC-NorthEast Stadium this season.
##

Spotlight on the Intimidators

Eddie Alvarez – 25 years old, 5-9, 180, a switch hitting shortstop who signed as a free agent with the White Sox last June and enjoyed an impressive 18-game stint with the Intimidators last summer. He batted .431 with three homers, including two in one game. Famously known as a world class speed skater, Alvarez competed in five events in the 2014 Sochi Winter Olympics and claimed a silver medal as part of the 5000 meter relay team. Knee issues brought him back to his second love of baseball and he wants to take it as far as he can as part of the White Sox organization. “I just keep my head down and perform here to the best of my ability,” Alvarez says. “TheWhite Sox are going to do whatever they think is right for me. Whether it is moving me up or not, I will be where I can help the team the most. But I am definitely going to show up every day and play.”

Spencer Adams – 19, 6-3, 180, right-handed pitcher. A year ago at this time, Adams was pitching at White County High School in Cleveland, Ga. He was selected by the White Sox in the second round (44th overall) of the 2014 draft and is currently rated a top 30 prospect in the organization. He was 3-3 last summer in Rookie ball, with a 3.67 era and 59 strikeouts. He has made two appearances so far for the Intimidators this season and got roughed up by the Hickory Crawdads last Friday for six earned runs in two-plus innings. But he has a lot of better days ahead. “It has been a little bit of a transition for me,” Adams said of his decision to embark on a professional career. “I have still got a little bit of growing up to do. I have to adjust to the lifestyle and the grind of a long season. A lot goes into getting mentally prepared for the season. That is a big part of this game.” He celebrated his 19th birthday on April 13 and has now learned how to do his own laundry.

Jordan Guerrero – 20, 6-3, 190, left-handed pitcher. Guerrero was drafted at age 17 out of high school in Moorpark, Calif., in the 15th round of the 2012 draft by the White Sox. He spent his first two pro seasons in Bristol of the Appalachian league then last season with the Intimidators, where he appeared in 27 games, went 6-3, with a 3.46 ERA and 80 strikeouts. His return to Kannapolis for 2015 as been perfect so far as he has not allowed a run in two appearances (1-0), striking out 17, including a career-high 11 in a two-hit win at Delmarva on April 15. So is he ever going to give up a run? … “Sooner or later it is going to happen,” Guerrero says. “That’s just baseball. One day you are great and the next you are off, but it is going good so far.” He was quick to credit his relationship and experience with catcher Brett Austin on the field. “He is a good catcher who knows what to call and watches what the batters do and what they can and cannot hit.” Guerrero is ranked as the 28th best White Sox prospect and his hot start earned him Pitcher of the Week honors in the South Atlantic League, for the opening week of the new season. (April 9-19).

Manager Tommy Thompson – 57, manager in White Sox system since 1990. In last five seasons, he has alternated between the low A ball Intimidators and the high A Winston-Salem Dash. This is his third stint in Kannapolis. A native of Oklahoma, he was named Carolina League Manager of the Year in 2012 at Winston-Salem. Thompson is very emphatic that it is coaching at the professional level that he enjoys the most. “This is a great level for learning baseball,” he says. “We are teaching kids out of rookie ball, out of high school, college and Latin America. Their goal and their prize is to be in the major leagues. This level is part of their first step as they learn how to be away from home, how to travel, how to play under the lights. It is a great opportunity for us coaches, instructors and managers, to teach them the White Sox way.”