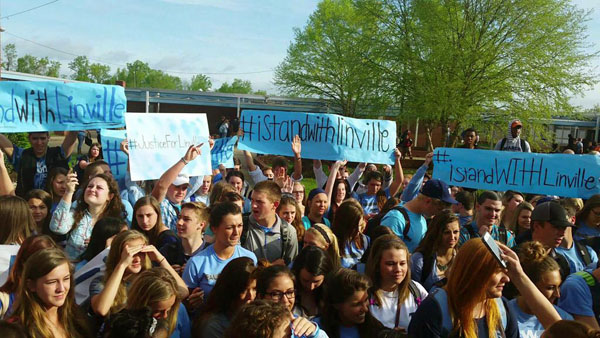 The camera may not lie, but it might not tell the whole story, either.

That’s something to remember as the nation debates the merits of body cameras and dash cameras for police, not to mention cellphone footage shot by citizens — including students.

West Rowan High School students have rallied behind popular teacher and assistant football coach Brian Linville, charged with assault last week after getting into a scuffle with a student. Linville was caught on camera tossing the student to the floor of his classroom.

Here’s what the nine seconds of footage do not show, according to the Rowan County Sheriff’s Office: The 15-year-old student had taken a school-issued laptop computer off Linville’s desk and was trying to leave with it when the teacher stopped him. The student pushed the teacher, who then pushed the student up against a metal cabinet. The camera started rolling just in time to show Linville struggling with and then throwing the student.

The footage also shows another, bigger student — someone who saw that things were getting out of hand — pull Linville away, saying “C’mon, Coach; c’mon, Coach.”

Linville, who has been suspended without pay, will have his day in court, currently scheduled for May 4. It’s easy to see how students, parents and others would want to show support for an educator whom they admire. Teaching in today’s high schools is a high-stress occupation, and lots of people empathize with Linville. The student, who got a juvenile referral, was clearly out of line, judging from information in the Sheriff’s Office report. That’s the rest of the story, the part that is not in the video footage. But the act of physically throwing a student can’t be overlooked by administrators or law enforcement, regardless of the coach’s popularity or the student’s misdeeds. If the case goes to trial, a judge will decide if Linville’s actions meet the definition of “assault.”

Popularity doesn’t give a teacher a pass on accountability. If anything, popularity makes a teacher’s actions and accountability even more important. Students are watching. What happens next will shape their concept of authority and limits.