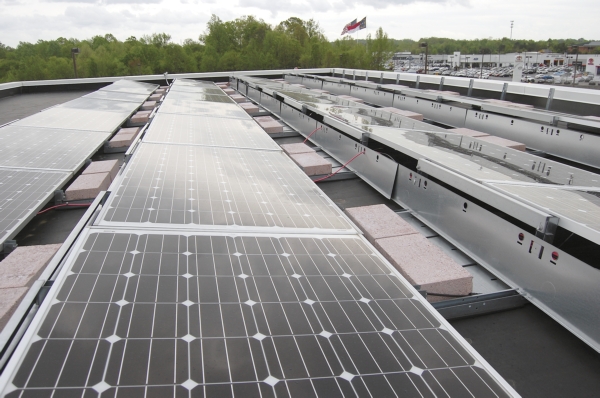 Solar panels line the roof of Gerry Wood Honda on Jake Alexander Boulevard. Wood installed panels on the roofs of his three car dealerships late last year. The panels are expected to produce a third of the buildings' energy needs.

Car dealerships look to the sun for power

Gerry Wood put solar panels on all three of his car dealerships. Left is the Kia dealership along side the Chrysler, Dodge and Jeep dealership on Jake Alexander Boulevard. Panels don’t cover the whole roof on the buildings because some sections of the roof aren’t designed to support the weight of the panels.

Gerry Wood installed about 1,300 solar panels on the roofs of his dealerships — Honda, Kia, and Chrysler, Dodge and Jeep. Together, the panels will produce about 398 megawatts of electricity each year, which is projected to produce about a third of the buildings’ annual energy supply.

Wood also pointed out that the cost of electricity is expected to rise in the future. The panels are guaranteed for 25 years, but they can last longer.

Being in the car business, Wood knows the products he sells cause pollution. And using solar energy is a way to offset some of that pollution.

For 2013, the Environmental Protection Agency estimates that 27 percent of the nation’s total greenhouse gas emissions, the major cause of climate change, came from transportation — second most behind the production of electricity in places like coal-fired power plants (31 percent).

For 2013, 6,600 million metric tons of greenhouse gases were emitted in the United States.

Solar energy produced at the dealerships each year is expected to offset 275 metric tons of carbon dioxide — equivalent to taking 58 passenger vehicles off the road each year.

Wood wanted to install the panels in 2008, but the economic derailment delayed the project until late last year. He said it took about two-and-half months for all of the panels to be installed. The system went online at the end of December.

The total cost of the project was slightly less than $810,000, Wood said. Using the state and federal tax incentives available for solar energy along with the savings on electrical bills, Wood expects to recover the initial cost in less than five years.

The panels were installed by Sundance Power Systems of Weaverville.

The panels produce an electrical charge known as direct current (DC), which is converted to alternating current (AC) by an inverter before being used to power the buildings.

Monitors in the lobby of the dealerships display information about the solar panels. The data includes things like the total amount of energy produced, how many gallons of gasoline have been offset and the amount of carbon dioxide emissions avoided — currently about 43 tons.

People can also go to www.solrenview.com to view the same information — type “Gerry Wood” in the text box above the map on the webpage.

“People have looked at it. We have to do a better job of educating customers as to what they’re looking at,” Wood said about the information on the monitors.

Using solar energy is something businesses should be thinking about, he said.

By Danelle Cutting Rowan Cooperative Extension Are you ready for farmers’ market season? I know I am, and this year... read more