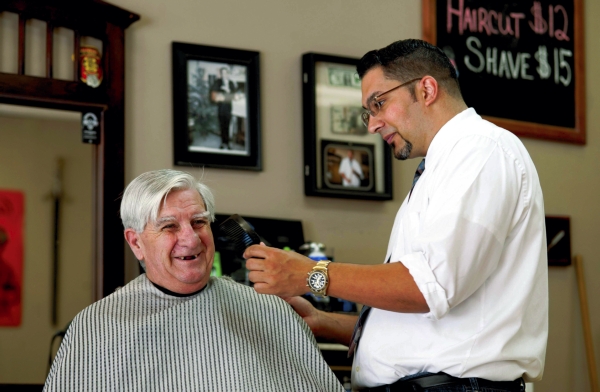 A haircut, shoeshine and thank you to veterans

SALISBURY — It took about two seconds for barber Armando Cruz and his customer, Mike Flaherty, to realize they were both Marines.

They said “Semper Fi” to each other about the exact same time.

Flaherty, who served a tour in Vietnam, was taking advantage of the free haircuts and shoeshines for veterans offered Monday afternoon by Made Man Barber & Shave in cooperation with Powles Funeral Home of Rockwell.

“I think this is a great, great, beautiful idea,” said Flaherty, who belongs to the AMVETS post in Rockwell. Showing appreciation to veterans who served the country — “it’s heartwarming,” he added.

Cruz, a friend of barber Tim Batten, was brought in from Greensboro to man a third chair in the shop because of the steady flow of veterans coming through the door Monday.

Owner Brian Hunt, who was cutting hair between Cruz and Batten, said his philosophy when he opened the shop was that if he were going to depend on the community to support the business, he also wanted to give back to that same community.

“This is just a fun way to give back,” Hunt said.

About that time, Korean War veteran James Day of Kannapolis handed Hunt his ballcap and eased into the barber’s chair.

“What are we going to do with this, brother?” Hunt asked, and Day described in a few words what needed to be done with his hair.

“I’m going to get it braided,” Day had joked earlier while getting a shoeshine from D.M. Mason near the front window.

Made Man Barber & Shave served as a collection point during the holidays for the funeral home’s gathering of gifts for Operation Toy Soldier. The barbershop also has a receptacle for Carolina Cremation’s program that accepts used American flags and disposes of them properly in conjunction with funeral services for veterans.

The red, white and blue bench outside the front door of Made Man Barber & Shave also was donated by Powles Funeral Home.

“Brian was right on board with us from the get-go,” Roakes said of when Powles mentioned the idea of the free haircuts and shoeshines for veterans.

Powles advertised the event on social media, in the newspaper, on posters and through the Rowan County Veterans Honor Guard and Thelma’s Tuesday morning coffee shop for veterans.

“I’m ecstatic,” Batten said of the constant stream of veterans settling into his chair. “It’s my daughter’s birthday, but she understood. She actually wanted to give free shampoos.”

Larry Bolen, an Air Force veteran of the first Gulf War or the first “Persian Excursion,” said he was getting a bit shaggy and needed a haircut anyway.

He’s a regular at Made Man Barber & Shave, so the free veterans’ haircut day was a bonus.

“Sometimes I treat myself to one of Brian’s straight-razor shaves,” Bolen said. “It makes me feel like a million dollars.”

Bolen said servicemen from his generation — he was a satellite communications specialist who often was uploading pictures to the Pentagon from the Red Sea — were probably more appreciated back home than what the men and women of the Korean and Vietnam eras experienced.

“I think it’s great,” said Jerry Barringer of Rockwell, who received a haircut from Hunt and a shoeshine from Mason. “A lot of people don’t realize what veterans go through. I appreciate everything they’re doing.”

Barringer was drafted into the Army and served active duty from 1967-70, including a 13-month stint in Vietnam. He mostly worked at an aviation depot.

After his stint in the Army was over, Barringer joined the Army National Guard, from which he retired in 2006 after 31 years. He is the former VFW commander for all of North Carolina and a cancer survivor.

As Mason scrubbed, rubbed and polished his black shoes until they looked as though they were new, Barringer tried to remember the last time he ever had a shoeshine.

It must have been at some hotel during a VFW convention, Barringer decided.

“They sure look better than what they were,” he said.

Day, the veteran from Kannapolis, served on the USS Waldron, a Navy destroyer that patrolled close to the 38th Parallel during the Korean War. He served from 1952-55 and had gone from the Reserves to active duty.

After his years in the Navy, Day returned home and worked in a bakery, for Fieldcrest-Cannon and for Duke Energy. Crews who served on the USS Waldron still have reunions, and Day has been to one held in Myrtle Beach, S.C.

On the Waldron, he did “the 360” and traveled around the world, going through both the Panama and Suez canals.

“I appreciate it,” Day said of the shoeshine and haircut. “I certainly do.”

Melissa Waller accompanied her father, 92-year-old James Deal, to the barber shop. Deal, a member of the Army’s 737th Tank Battalion during World War II, is going to be the grand marshal of this year’s Faith Fourth of July Parade.

The local celebrity took advantage of both the free shoeshine and free haircut.

“Anything special for veterans, we have to go do,” Waller said.

The haircuts and shoeshines were offered from noon to 5 p.m.

Roakes made sure the veterans knew they could go to Innes Street Drug nearby and receive a free fountain drink, too, so it was a good day to be a veteran Monday.

But many of the guys will tell you every day is a good day to be a vet.

Yesterday: When it ‘snowed’ in August

The above photograph, taken by Post photographer Johnny Suther, gave a good view from the air of the mess created... read more