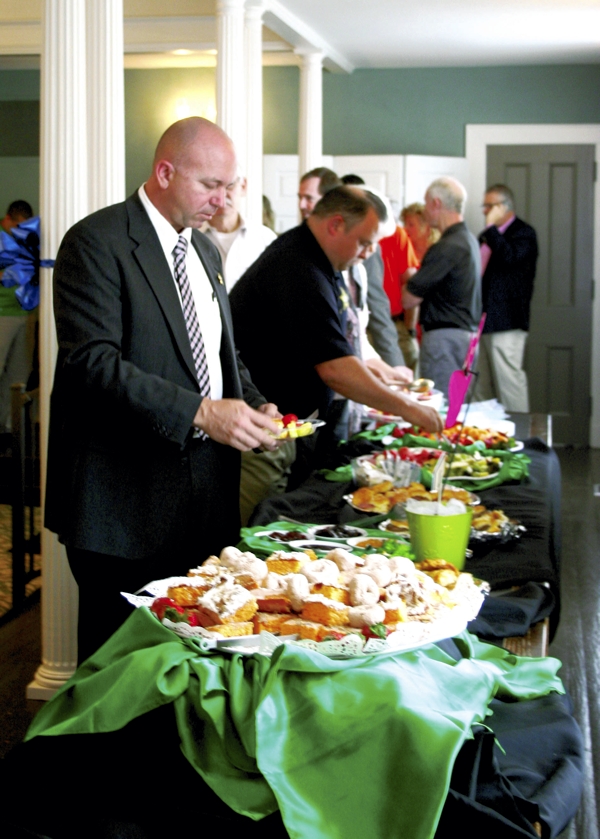 About 100 local law enforcement members, board members, staff and donors of Prevent Child Abuse Rowan attended a brunch Friday morning hosted by the agency to thank all those who help children in need, and to highlight National Child Abuse Prevention Month. Susan Shinn, for the Salisbury Post.

The staff of Prevent Child Abuse Rowan said “thank you” on Friday morning to all who work with children in need, “because most of these jobs are thankless jobs,” said Executive Director Beth Moore.

About 100 members of local enforcement, partner agencies, board members, elected officials and donors attended a brunch at Rowan Museum.

“We want to make sure that the people know they’re appreciated,” Moore said.

Moore said that the result of having more awareness surrounding the prevention of child abuse is that the agency’s case load increases. In 2013, the agency worked 113 cases. In 2014, that number increased to 192, and so far this year, the agency has worked 68 cases.

“We are growing,” Moore noted.

A new Speak Up and Be Safe program for first- and fifth-graders has produced an “overwhelming and positive response,” Moore said. “We do a lot of reactive work. Our goal this year is to get ahead of abuse before it starts.”

The morning’s keynote speaker was Shawnda Drummond, special agent for the FBI who specializes in children prostitution cases and child pornography cases.

Drummond said that the FBI taught her how to interrogate suspects, but not how to interview child. That’s where child advocacy centers such as the Terrie Hess House — where Prevent Child Abuse Rowan is housed — come in.

The first time she went to a child advocacy center, she said, she was surprised at how much it looked like a house. An investigator asked the child non-leading questions, and received full disclosure in a short amount of time, Drummond said. “I was blown away. I had never seen anything like that.”

Child advocacy centers, she said, are victim-centered and child-centered.

Drummond shared a quote from Nelson Mandela: “There can be no keener revelation of a society’s soul than the way in which it treats its children.”

“This is what is exemplified in the child advocacy centers,” she said.

Drummond talked about one case in which a 14-year-old girl was kidnapped from Morganton, taken to Charlotte, and sold into prostitution.

When law enforcement found her, she was taken to a child advocacy center, Drummond said. “In one stop, she was holistically taken care of.”

It typically takes about 40 minutes to interview a child, Drummond noted. “In less than 40 minutes, they disclose the worst thing that will happen in their entire lives.”

The reason, she said, is because child advocacy centers put the victim first. The setting is typically a beautiful room, a safe place. Center staff also treat a child’s family. “Many times, adults have taken trust away. We give something to children and do no expect anything in return.”

Prevent Child Abuse Rowan also used the event to present its annual awards. F&M Bank received an award for its community support. The President’s Award was given to Thomas and Jeanie Eller, Fred and Alice Stanback, and Tom and Larry Hess of Blast-It-All. Detective Sara Benfield of the Rowan County Sheriff’s Office received the Kathleen Russo Friend of a Child Award.

“Our mission is to catch the bad guy,” Sheriff Kevin Auten said afterward. “Sometimes, we forget about the sensitive nature of children.”

The partnership between law enforcement and Prevent Child Abuse Rowan is critical, Auten said. “The goal is to help children maintain a normal, healthy life as they move forward. There are certain things in law enforcement that cripple us. Seeing children who are in a bad situation is tough.”

And please save the date for Prevent Child Abuse Rowan’s inaugural corn hole tournament, Corn for the Kids, set for Sept. 19 at the Trolley Barn.