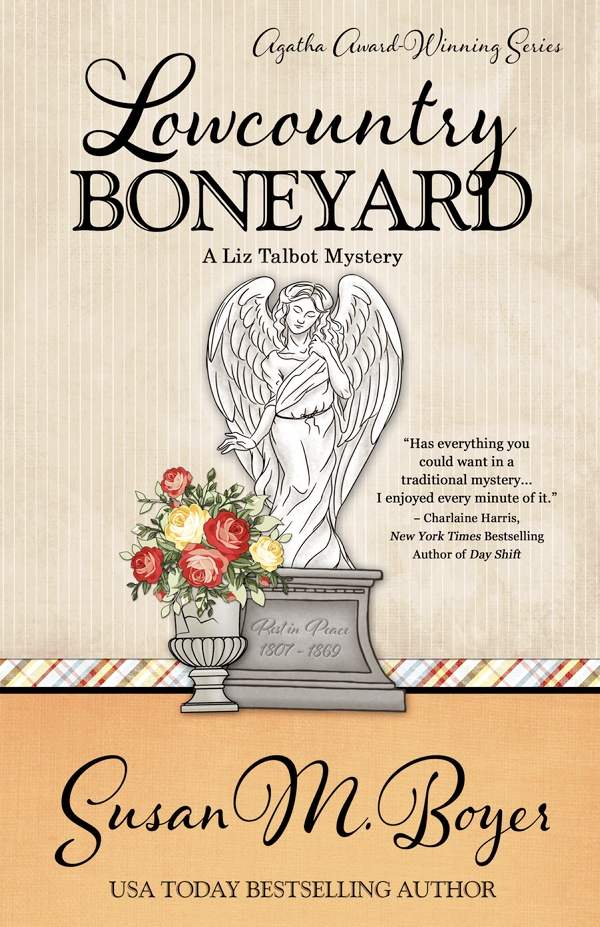 Susan Boyer, who grew up in Faith, will be at Literary Bookpost Sautrday, April 25, noon-2 p.m. to sign her new mystery, 'Lowcountry Boneyard.'

If you don’t remember Susan Boyer from her first mystery, “Lowcountry Boil,” or her second, “Lowcountry Bombshell,” remember her this way: She’s from Faith and graduated from East Rowan HIgh School in 1979.

Now living in Greenville, S.C., as her private investigator character Liz Talbot sometimes does, she has a special love for the Charleston area, as does Liz.

Liz has one thing Boyer does not — Colleen. Colleen is a spiritual guide for her childhood friend and she’s, well … she’s a ghost only Liz can see (but Colleen is working on that).

Adding this twist to her good, old-fashioned mysteries allows Boyer to see things Liz, her first-person narrator, cannot. Colleen also has a talent for creating tension in the books, with her vague but heartfelt warnings.

Boyer, speaking from her home, says Colleen was not in the first few drafts of “Lowcountry Boil,” but she needed to have a way to make Liz driven and seeking control. Colleen is it — Liz’s childhood friend who died, and Liz thinks she’s to blame.

“Most people really like Colleen,” Boyer says. “Even reviewers like her.” Some would rather ditch the paranormal element, but because the books are set in the South Carolin lowcountry, known for its history and ghosts, “People sort of take it for granted here.”

Boyer, a big fan of Carolyn Hart’s mysteries, some of which have a ghost, asked her to write a blurb for her first book. Charlaine Harris, who uses a lot of paranormal elements, blurbed on Boyer’s latest, “Lowcountry Boneyard.”

She met Harris at Sleuthfest in Florida and told her she was a fan, then learned what a lovely person she is. They chatted and Boyer finally asked for the blurb. “I floated for the rest of the convention. It was one of the most wonderful moments of my life.”

Boyer says she’s trying to create a series in the same vein as Sue Grafton’s Alphabet Mysteries with Kinsey Mallhone. “I think if Kinsey had grown up in the South and had an extended Southern family, she’d be like Liz.”

She thinks of Liz as a grown up Nancy Drew, a favorite character from Boyer’s past.

Boyer discovered when she wrote her first book she had created something she wanted to read, but she had to edit it and rein it in. Was she a mystery writer or was it romantic suspense?

“You want to write your best book and you need a good editor, but … when the book comes out, not everyone will love your book.” Sometimes, as an author, “it’s hard to come to terms with people who don’t like your book,” she said.

Boyer plots out her novel using a spreadsheet because she needs to know how Liz will work out a solution. She starts with the crime, who did what and why and then how Liz will figure out clues. When she was first writing, she had too many subplots. Outlining eliminates that.

The island of Stella Maris, where Liz lives and works, is completely made up. Boyer loves small towns like the one she grew up in, but there’s no real island with that feel, all are so developed. “If I make up my own island, I don’t have to worry about getting it right.”

But she does take her characters to Mount Pleasant and Charleston, which readers enjoy, and she uses real street names and places. Sometimes she walks the streets she’s going to use to make sure the details are right.

Boyer has been doing ancestry research, spending days in the history room at Rowan Public Library and hours online. A visit to a graveyard to look for her father’s relatives inspired the current book, where Liz the PI is doing a little online family research on the people who’ve hired her to find their missing daughter.

Boyer keeps a family tree of her characters so she can get all the relationships right. On her own family tree are cousins Robert Ketner and Linda Ketner, who lives in Charleston. Linda  is one of Boyer’s first manuscript readers for each book.

In addition to Linda, Boyer’s first readers include a private investigator and a woman who is an 11th generation Charlestonian, along with a member of the 12th generation.

“I try to go to every length to get it as right as I can.” She actually walked through a swamp to make sure an event in the book was going to be possible. But she’s careful not to let her all-seeing Colleen solve cases for Liz. “I get exasperated at mysteries that do that. Liz has to be the detective.”

Boyer left Faith when she was 26 and moved to Greenville. She and her husband have a home in Mount Pleasant, S.C., too. “I’ve always loved the South Carolina beaches.”

But maybe one day, she could bring Liz up to Faith, maybe for the big Fourth of July celebration.

Liz, like Kinsey, ages with each book. And like Kinsey, men complicate her life. Liz loves Nate, but Nate loves Greenville, so friction is growing between the two, adding another dimension. And fodder for the next lowcountry mystery, “Lowcountry Bordello,” which will come out in November.

Susan Boyer will sign books and talk to readers on Saturday, April 25, from noon-2 p.m. at Literary Bookpost, 110 S. Main St., downtown Salisbury. Stop by and ask for Colleen.