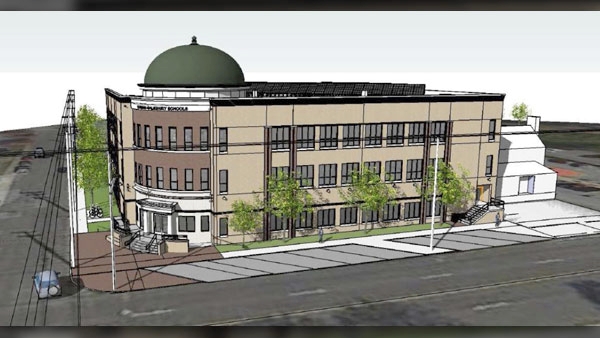 Architect's rendering of the new central office for Rowan-Salisbury schools, the Wallace Education Forum, with a dome.

One word sums up the sentiment at Saturday’s groundbreaking for the Rowan-Salisbury schools’ central office: finally.

When the Rowan and Salisbury school systems merged, my daughters were in elementary school. Now one of them is a school principal.

A lot of options for a central office were batted around in the intervening decades. Did school, county and city officials break ground Saturday because they found the perfect site in the 500 block of North Main Street? Not necessarily. But they found a good site, identified generous supporters and got a financial commitment from county commissioners. The stars aligned, and the new office building will soon be under construction.

Dr. Richard Miller’s tenacity had a lot to do with it. He was chairman of the school board when this plan came together. Miller is not one to be intimidated. Nor is Superintendent Dr. Lynn Moody one to back down because something is difficult or controversial. They made a formidable team.

Josh Wagner, the new chairman of the school board, graciously gave Miller his due during ceremonies at the site. Wagner and Miller haven’t always seen eye-to-eye. But now that Wagner is in the chairman’s seat, he seems to appreciate  Miller’s perspective more.

At a luncheon before the ground-breaking, Moody thanked some of the project’s key supporters:

• Fred and Alice Stanback, for providing solar roofing and “reminding us to care about the environment,” Moody said.

• The Blanche and Julian Robertson Family Foundation, represented at the luncheon by the three Robertson siblings: Julian Robertson Jr. of New York, Blanche Robertson Bacon of Raleigh and Wyndham Robertson of Chapel Hill. The foundation was the first to give a private donation with the flexibility to move the project ahead, Moody said, and later came back with a second gift. “That contribution kept our dream alive,” she said. The conference room on the first floor will bear the foundation’s name.

• Mona and Lee Wallace, for the gift of property through a property swap, the first gift toward a dome for the building, and for allowing the system to continue using the Ellis Street property while the new building is constructed.

The Wallaces graduated from local high schools — she from North Rowan, he from Boyden, now Salisbury High. The new office building, to be called the Wallace Educational Forum, was their way of giving back to the community, the superintendent said.

(In her comments later, Mona Wallace called Moody “one of the most dynamic, pushy, committed women that I’ve ever met.”)

“Those who say it can’t be done should get out of the way of those that are already doing it.”

That’s from a politician by the name of Gil Gutknecht. The source may be less important than the sentiment. Moody and the school system are charging ahead — not only with a new building, but also with a new spirit of collaboration from the community.

Former Gov. Jim Hunt was even present at the luncheon, in spirit. Rita Foil, the schools’ public information officer, read a letter from Hunt. He regretted not being able to attend the groundbreaking but lauded the project, saying it would be a reflection of how the community values the education of its children.

Julian Robertson Jr. sounded the one cautionary note of the day.

Rowan-Salisbury has a great new school superintendent and will soon have a great new building, he said.

Robertson urged the community to keep driving forward to make the schools the best they can possibly be. The public is going to demand it, he said, and “it’s our charge to give it to them.”

“Our charge.” Robertson was speaking, I believe, of philanthropists, government officials, educators, business people and community leaders — the people in the room at that luncheon.

Now that they’ve united behind the central office project, they should be able tackle just about anything.