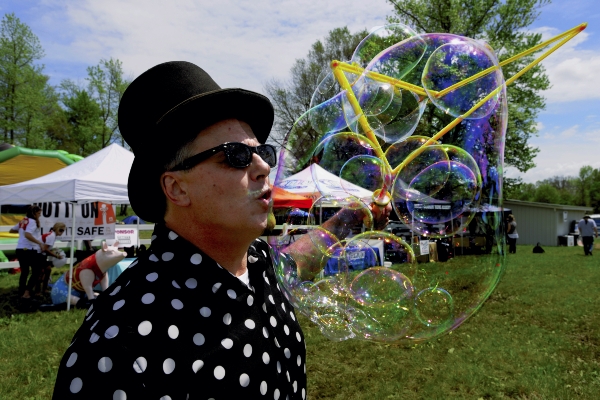 Steve Langley, "the Bubble Man" makes bubbles at the 4th annual Earth Day at the Dark Before Dawn Farm. Langley calls his business of entertaining the "Soap Bubble Circus." photo by Wayne Hinshaw, for the Salisbury Post

The three-day music festival features 25 bands on two stages this year, and incorporates a number of genres, including bluegrass, Americana rock, funk, country rock and even a Native American rock band.

“We try to mix it up,” said organizer Stacey Carter, adding that they try to get people “into different things.”

Three years ago, The Land Trust began giving them a budget for a headliner band.

In the second year, Land Trust gave them a budget for a headliner band

“This year we’ve gone far beyond where we started,” Carter said. “We have some of the highest quality music around.”

This year, Earth Day Jam was held at Dark Before Dawn Farm, just outside of Salisbury. The move allowed them to add more parking, as well as the option to camp this year. In the past, the event was held at Saving Grace Farm.

Earth Day Jam isn’t just about good music, however, and that’s what makes it especially unique.

Carter and co-founder Ashley Honbarrier are passionate about protecting the environment and other conservation work.

“We wanted to do something to celebrate Earth Day,” Carter said, adding that protecting the environment is “important work.”

“It’s really about that mission,” she said.

Conservation messages are scattered throughout the farm and there’s a focus on local vendors and food.

The festival is also a fundraiser for The Land Trust for Central North Carolina, which seeks to conserve land in a 10-county region.

“Most of our expenses are covered before the weekend begins,” Carter said, adding that all the profits from the event are able to go toward Land Trust.

Carter and Honbarrier seek to communicate environmentally friendly habits through their actions as well.

Earth Day Jam strives to have as little waste as possible from the event. They promote recycling and strongly encourage attendees to purchase reusable water bottles by providing ice water throughout the day to refill those water bottles.

They want to start composting at Earth Day Jam, and although they weren’t able to provide it this year, they’re “moving in that direction,” she added.

“We want to influence people who might not think about those things,” she said.

Earth Day Jam is committed to being a family friendly event.

Bill Pressel and Daryl McEwen set up a booth to talk to attendees about agriculture systems like ecological gardening.

“We’re just here to talk about this sort of stuff,” Pressel said.

The pair explained aquaponics, mycology and permaculture as people stopped by their tent.

“I love the fact that there are so many artisans,” Butcher said, adding that she’s “in support of anything earth day.”