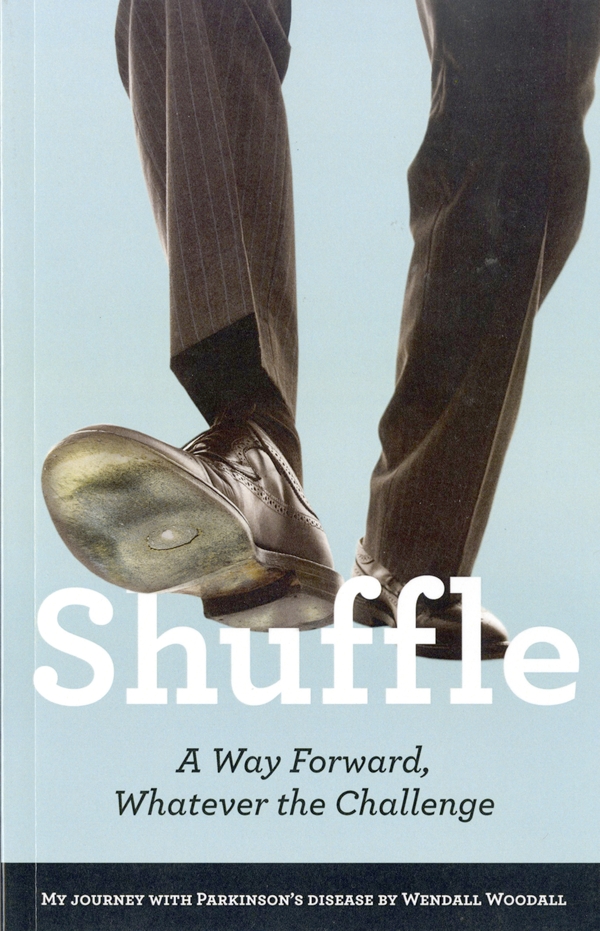 Wendall Woodall is just back from the Dominican Republic and he’s tired and a little hoarse.

But he’d been working about 12 hours with a group of missionaries, and his plane landed at 2 a.m. Enough to wear any of us out.

But Woodall is different. He was diagnosed with early-onset Parkinson’s Disease at age 49. Now, he’s preparing for brain stimulation surgery, often a last resort for Parkinson’t patients. But his doctor says doing it now could give him years of reprieve from the symptoms of Parkinson’s — a shuffling walk, muscle tremors, voice problems, rigidity of the muscles. There is no cure, but Woodall is nothing if not hopeful.

In 2014, he wrote a book, “Shuffle: A Way Forward, Whatever the Challenge,” in which he approaches his diagnosis with humor and a deep faith conviction. He has a little help in that department, since he’s a pastor. And the humor helps with his other job as a high school teacher at a Christian academy.

Woodall’s book is not a care manual, nor a collection of tips and advice. Instead, it is all about faith. Some patients can lose their faith, wondering why God has afflicted them.

Woodall talks about his honest prayers to God, not “let this cup pass me by,” but this: “God, I’m trusting in your goodness, that you know what’s best for me. And I’m trusting in your power, that you have the ability to heal me if you want to. I’ll still believe the first one, Lord, even if the second one doesn’t take place. But, just for the record, you know which answer I prefer.”

Woodall says from his home, “God could heal me, but he hasn’t. I just believe I can do things through my life whether he says yes or no. He’s using me as a platform.”

Woodall knows not everyone can accept that message, and when he is asked to speak to a group, he’s careful with his audience. “I say I’ve opted for optimism. I have emotionally fragile days, but go in with hope. I use a lot of humor and lightness.”

He is ordained in the Assemblies of God faith and teaches leadership and Bible at the school. He’s also the campus pastor.

He likens his struggle with Parkinson’s to his years in Honduras. He compares it to the steep learning curve with the language, only to find out the Spanish they learned in Costa Rica is not the Spanish spoken in Honduras. His congregation often laughed at his bumbles in translation. More like guffawed until tears ran down their faces. He tells of one missionary who went off in a huff the first time that happened, and how bad everyone felt. Woodall laughed along and learned.

That story has made the book part of missionary training curriculum, an unexpected turn. And he was able to use it as part of his thesis for his master’s degree.

He does not detail many of his symptoms, beyond the classic shuffling walk, and, in his case, a stiff upper body. He also experiences curling toes and fingers.

He praises his wife, Cheryl, and daughters Brittany, Lauren and Sarah for their humor and steadfast support. Wife Cheryl also has a sense of humor and knocks Woodall down a notch or two when he gets a little too righteous. He writes that his family has been through the stages of grief, anger, denial, acceptance, and will go through that numerous times.

Getting “Shuffle” on paper has been a bit of a catharsis for him. “It let me reflect on things I spoke about, and the ‘why’ questions. It was good for me to write those things out.”

He had a friend proofread the book, and she ended up doing much more. She had worked with the Billy Graham association and ended up editing the book for him. “She was a hard taskmaster.”

But she was impressed enough to start a publishing company, Highway 51, with her husband to publish the book. They have now published several books about life journeys.

Woodall continues to read everything he can about Parkinson’s. He takes his medication regularly, noting when he gets tired and feels the symptoms worsening. He’s active in a support group he leads and with the Parkinson Association of the Carolinas.

All that information led him to a decision to have the brain surgery, starting with the placement of screws in his skull on April 21 for the first part of the procedure. When he visits Literary Bookpost on April 25, it will be a few days before the second phase of the surgery.  Not much slows him down.

And that’s the tone of the book. He makes the best of everything. He believes in the Word of God, as written in the Bible, and he encourages others to use their faith in God and themselves when faced with a difficult path. He also believes in the skills of the medical community, and sees no problem trusting God and science.

He will sign books and greet people on Saturday, April 25, from 3-5 p.m. at Literary Bookpost, 110 S. Main St. He’s sure to have stories to tell