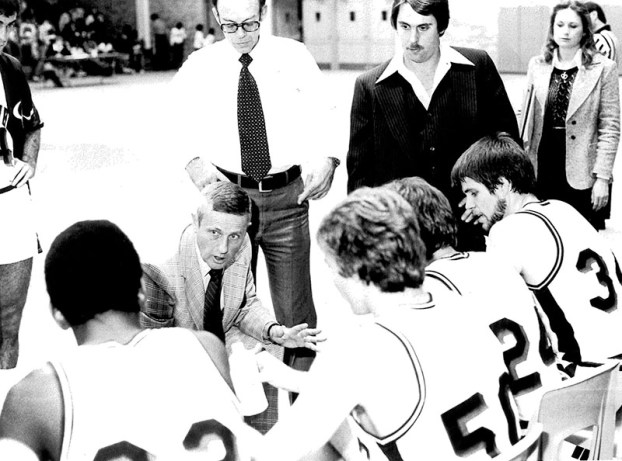 SALISBURY — The B-24 was a World War II heavy bomber that crews grimly referred to as a “Flying Coffin.”

“Flying Coffins” because there was only one exit — at the tail. If anything went wrong, it was unlikely anyone was getting out.

Sam Moir served on a B-24 as a teenager. Trained as a radio operator and tail gunner, he saw action in the skies over Guam and Okinawa.  He came back from the Pacific Theatre with a Purple Heart.

Rowan County basketball history would have been much different if Moir had failed to survive the B-24s.

Moir’s birth certificate says he was born in 1924, but nothing else about him is 90. He remembers details of games played decades ago. He’s still funny, still fearless, still feisty.

“They always ask if all my players liked me,” Moir said with with a grin. “Well, the top eight did.”

The best statistic, however, might be his players’ 92-percent graduation rate.

Moir’s name is known to every basketball fan in Rowan and Davie counties. The massively attended hoops holiday tournament is known as the Sam Moir Christmas Classic and is played on Sam Moir Floor in Catawba’s Goodman Gym.

The new floor was not wood, but tartan, which was considered state of the art at the time. When the floor was waxed, footing was treacherous. Catawba debuted by blowing out Tusculum 120-82 as players slipped and slid through the Civitan Thanksgiving Classic.

“That was a comedy,” Moir said.

Charles Lynn scored the first nine points for Catawba in the new gym.

Moir was born in Francisco (pronounced Francis-Coe) in Stokes County. The closest town of any size is Mount Airy.

There were only 13 in Moir’s class at school, but Francisco had a knowledgeable coach in Miller Hundley. Miller was the father of Bob Hundley, who went on to coach North Rowan baseball and basketball for many years.

Moir’s best sport was baseball. He competed on a loaded Oak Ridge Prep School team that lost only once and played in the minor leagues before and after his Air Force service. He was a third baseman.

Moir was offered a contract by the Brooklyn Dodgers that would have sent him to a farm club in Utah, but he’d met the girl he was going to marry, Betty Winkler. That’s why he stayed in North Carolina.

By 1950, he had bachelor’s and master’s degrees from Appalachian State. Then he got his first shot at coaching. Wally Shelton, a respected coach, wanted Moir to direct the baseball and basketball teams at Mount Airy.

Moir coached Mount Airy’s Granite Bears from 1950-60. His prep basketball coaching record was 179-74, including a state championship and a perfect 25-0 record in 1960.

Moir’s success attracted college suitors. Guilford offered him the head coaching job. When Moir called his friend, Catawba coach Earl Ruth, for advice regarding the Guilford offer, Ruth invited him to Salisbury to talk about it. Before Moir left Ruth’s office, he’d signed a contract to coach Catawba instead.

“I didn’t leave the cupboard bare at Mount Airy,” Moir said. “My brother (Charlie) went 25-0 there the next season.”

Moir brought talented players with him from Mount Airy, including guard Tom Childress, who became an important figure in Pfeiffer and Catawba athletics.

Moir’s first recruiting target was Clinton’s Terry Holland, but he lost him to Davidson’s new coach, Lefty Driesell. Moir’s recruiting breakthrough was landing Al Johnson, a Virginian who finished his career with almost 1,400 points for the Indians.

“Mount Airy played against Al’s high school team,” Moir said. “We held him to 40.  I remembered him.”

The mid-1960s brought social change. Moir welcomed Dwight Durante and Lawrence Bullock as Catawba’s first black players for the 1965-66 season. To his surprise, Durante was asked to stay with the Moirs on his recruiting visit. The breakfast Betty Moir served sold Durante on Catawba.

The 5-foot-8 Durante still owns the Catawba record book. He scored 2,913 points. Durante was involved in amazing games, including one at Western Carolina Moir recalls vividly. Durante made a buzzer-beating halfcourt shot, and  Moir, who hadn’t endeared himself to Western’s fans, scurried from the gym with a police escort.

Garland Davis, the first black player in North Carolina’s East-West All-Star Game, was another recruiting triumph. The big schools hadn’t heard of Davis until he dominated the all-star game. By then, Moir had the Stanly County kid wrapped up.

“A lot of schools came after Garland,” Moir said. “But we took him to the beach and hid him, and we had his momma in our corner, too.”

Moir’s best teams were in the early 1980s. Those were offensive machines driven by great point guards. There was a 1982 game in which Catawba beat Alderson-Broaddus, 131-119. That was heaven for Moir.

“We always wanted to win, 95 to something,” Moir said.

When TV analyst Billy Packer declared Catawba, led by former Davie star Dwayne Grant, to be the second-best team in the state in 1982 (behind UNC’s D-I national champions), he wasn’t kidding.

“My coaching strategy was nobody but Dwayne shoots in the last three minutes,” Moir said.

The 1983 Catawba team had three players, 6-foot-8 or taller, drafted by the NBA. That squad went 29-4, still the school’s best record.

The 1982 and 1983 teams came up short in the NAIA national tournament in Kansas City.

“Our best player, Mark Simpson, wasn’t healthy either year,” Moir said. “I thought we were still good enough, but we didn’t win.”

Catawba’s 1988-89 team was supremely talented, but it was shut down at the Christmas break by a measles quarantine and only played 11 games.

Dennis Davidson, former sports information director and athletic director at Catawba, remembers Moir annually was excited about his team in September and then skeptical in November, after a few bad practices.

“When school would start, Coach would be saying, ‘Well, we’re going to be pretty darn good,'” Davidson said. “By the time the season started, he was saying, ‘Show me one dang team on the schedule we can beat.’ “

Moir had a temper. Davidson remembers the coach pounding a table and sending pens and pencils flying all over the playing floor — during the action.

Childress, who went on to coach Pfeiffer after he played at Catawba, remembers Moir mangling a folding chair with his fist when he was dismayed by a call at Pfeiffer.

“They’re up by one late, we steal the ball, and then out of the clear blue, they call a double-dribble,” Moir said.

“We started to throw that chair away, but I decided it might have some use,” Childress added. “When Catawba came back to Pfeiffer the next season, we taped that chair up and put it out there for Coach to sit in. It folded right up on him.”

The floor at Goodman Gym is being replaced now as part of a rebuilding project. Moir watched the last men’s game on the old floor — and saw the Indians win.

“The goal is to make this place like new again,” said Childress, who chaired fundraising efforts.

Moir is serving as the honorary chairman of a project that will upgrade the basketball playing floor, bleachers, locker rooms, offices, scoreboards and press row tables.

When the new court is ready, it will still be Sam Moir Floor, but Moir’s flowing signature will be added to honor Catawba’s basketball tradition and its winningest coach.

“There have been a lot of memories poured into that gym,” Childress said. “With more to come.”

By Mike London mike.london@salisburypost.com MOUNT ULLA — West Rowan went from losing to winning in the blink of an eye, and... read more