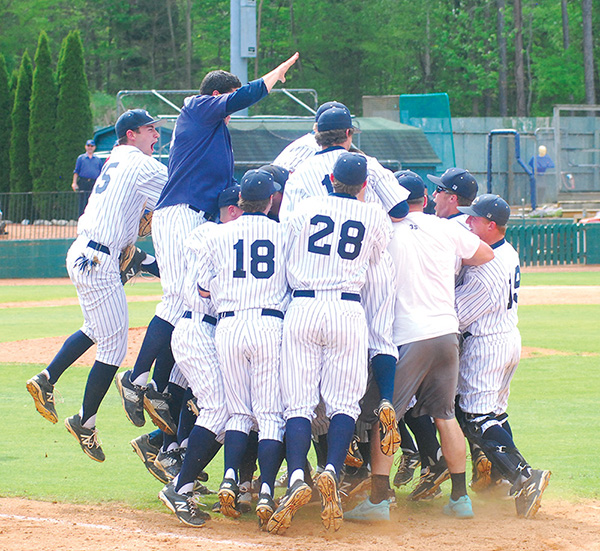 ADAM HOUSTON / SALISBURY POST Teammates mob Catawba's Craig Brooks after Brooks hit a walk-off single Saturday to give the Indians a 6-5 victory over Tusculum at Newman Park. With the win, the Indians captured the South Atlantic Conference championship.

SALISBURY —  Catawba’s  T.J. Wharton practically danced to first base after being hit by a pitch with the bases loaded and with the first game of  Saturday’s doubleheader at Newman Park on the line.

Well, Wharton was sort of hit by a pitch.

“That pitch actually got me on the jersey,” said a pleased Wharton, tugging at the sleeve of his loose-fitting garment. “We were wearing our throwback uniforms today and that gives us a little bit of extra jersey.”

Needing a victory to clinch an outright South Atlantic Conference championship, Catawba trailed Tusculum 5-4 heading to the bottom of the ninth. Pinch-hitter Sam Laws walked to start the inning, and Grayland Fowler ran for him.  Blake Houston was hit by a pitch to put two men on, and after Kyle Smith struck out,  Tusculum coach Doug Jones ordered an intentional walk to scorching-hot Catawba No. 3 hitter Will Albertson to fill the bases.

Wharton was next. His fortunate HBP brought home Fowler to tie the game at 5-all. Craig Brooks followed with a well-struck sacrifice fly to center field, and Houston scored easily from third base to give the Indians a walk-off 6-5 victory. A delirious dogpile followed Houston’s arrival at the plate.

“Just the second walk-off I’ve had,” Brooks said. “We battled all the way through. We sweated it out.”

Catawba (35-10, 23-6) didn’t play smoothly, making four errors to negate strong pitching by starter Connor Johnson. Two solo homers by Albertson, his 22nd and 23rd, kept the Indians in the game. They tied it 4-all when Chance Bowden dashed home on a wild pitch in the seventh.

“We didn’t play well, but if you don’t give up, there’s always a chance, and the best thing about this team is they never give up,” Gantt said. “We’ve won championships with this group , but it’s always been on the road. This is the first time I  can remember them winning one here. It was good to see them get to celebrate at home.”

“None of those guys had  his best day,” Gantt said. “But they were all part of it.”

The seven-inning second game was anticlimactic with the SAC championship decided, but it was equally tense. Catawba’s 5-4 win meant taking the series two to one.That could be important in the big picture, when regional rankings are announced.

Catawba grabbed a 3-o lead when Houston drove in a run and freshman Austin Stilley knocked in two.

“At the start of the season we wondered how much our freshmen would help us,” Wharton said. “It’s never the same one, but one of them is always coming through.”

Catawba starting pitcher Matt Farmakis was strong early but ran into control problems. Then Tusculum clawed away against Catawba’s bullpen to make it 3-all entering the bottom of the fifth.

That’s when Catawba scored twice. Stilley walked, and Albertson sent a double whistling over the third-base bag and into the left-field corner to score Stilley. Brooks’ opposite-field double off the wall in right plated Albertson for a 5-3 lead.

“Brooks had played a lot of innings in the field (at third base), and it’s tough to ask a guy to pitch after that,” Gantt said. “It’s not like he was sharp, but he was throwing hard.”

Brooks said he had 10 warmup pitches before he went to the mound to fight through the sixth. After he’d had additional   warmup time, he was throwing as hard as he has all year in he seventh. The Pioneers went down 1-2-3.

Will Beeson got the win. Brooks got his first save of the season.

“It mattered to win this series,” Brooks said. “We’ll see those guys again in the tournament, and we didn’t want them leaving here believing they were better than us.”

Next weekend’s SAC tournament will be held in Forest City. Saturday’s exhausting sweep should be great preparation.

” The story today was we didn’t play our best, but we still won the games,” Wharton said.  “We’re heading to the tournament  in a good frame of mind.”

CHINA GROVE — If nothing else, Carson’s baseball team is guilty of not being able to tell time. The Cougars... read more