Business has been convenient for 30 years 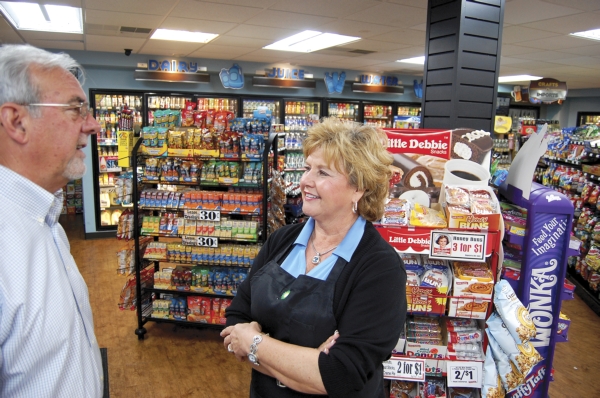 Sandy Cashion talks with Steve Kirby, one of her vendors, inside Country Cupboard on Statesville Boulevard. Cashion used to manage the store before taking over operations and evenutally buying it. Her company, Royal Enterprises Inc., now operates 11 convenient stores.

Sandy Cashion didn’t have a master plan to get where she is today. Instead, things just kind of came together.

Cashion owns and operates convenience stores — the ones at gas stations. And she’s been doing it for 30 years.

She is the president of Royal Enterprises Inc, and through her company and a partnership with another, she operates 11 convenience stores including the Country Cupboard BP on Statesville Boulevard and Sandy’s One Stop in China Grove.

“But it’s worked for 30 years, so I guess I was in the right place at the right time,” she said earlier this week while sitting in the conference room at her office on East Fisher Street.

It all started in 1985 when she was 31. She had been working for Mid-State Petroleum in a management position in some of the company’s convenience stores. “I didn’t know a whole lot about the convenience store business, but they had a position open and I applied for it,” she said.

But then Mid-State informed Cashion that she was going to be laid off. However, the company didn’t just cut her loose. She was asked if she’d be willing to lease and operate the Country Cupboard store on Statesville Boulevard, which Mid-State had been operating.

Cashion wasn’t sure whether to take the deal, but a friend, Jim Crump, who also worked for Mid-State, encouraged her to do it. He said he’d be her partner in the business — but that he’d have to be a silent partner because he was still working for Mid-State at the time.

Cashion, who grew up in Statesville, decided to do it. And April 15, 1985, was her first day of business.

Things worked out. After four or five years, she and Crump ended up buying the store.

Over the years, they started operating more stores. Cashion said opportunities kept coming along and falling in their lap.

She and Crump were business partners, and good friends, until Crump’s death from cancer in 2008.

“It was a great partnership,” Cashion said.

Today, Cashion operates convenience stores in Rowan, Burke, Iredell and Catawba counties and as far away as Hildebran. She owns three of the 11 stores and has 85 employees, including five in the Fisher Street office. The locations are either a BP, Shell or Citgo station.

Cashion said she’s pretty much able to run everything from her office, which she’s been in since 1998. Before that, she ran the business out of a back room in Country Cupboard.

She tries to visit all her stores every couple of weeks. She has a lot of paperwork on her desk and said she prefers paper over using the computer.

Before computers, she kept all the numbers for four stores in long ledgers.

Cashion said she’s not necessarily book smart, but that she’s “blessed with a little bit of common sense” and learned through experience how to manage a business.

Asked what it takes to be successful in the convenience store business, she said: a good location, clean stores and competitive prices.

Above all, she said, you have to have a great, long-term staff.

Some of her store managers have been with her for 20 years, Cashion said.

Her district manager, Dianne Bayne, has been with her for 24 years. And Bruce South, who is currently her marketing director, was with the company in the early years.

Back then, he would help get new stores up and running. He left the company in the 1990s, but came back eight years ago.

South, who has also spent time as a vendor, said he likes the business because of the people.

“It’s so different everyday,” he said about working with different people and places.

Bruce’s wife, Tonya, is the manager of Country Cupboard and has been working for Cashion on and off for 25 years.

She said the company is like a family and that she enjoys meeting new people and getting to know the customers who visit the store daily.

Country Cupboard is known for its front patio and rocking chairs where people relax with a drink or cup of coffee and talk.

Rick Snider said he’s been coming to the store for 20 years. He often sits in one of the chairs on the porch in the mornings, talking with other customers. He said he enjoys the relaxed atmosphere and camaraderie.

Country Cupboard has a lot of regulars whose hang-out spot is the porch, Cashion said.

Patsy Young lives on Dan Street and has been getting her gas at Country Cupboard for decades.

“Always nice people,” she said about the store.

Cashion said the people — employees, customers and vendors — are what she loves about the business, too.

“I can go out to the Country Cupboard on any given day and see people I recognize from 30 years ago,” she said.

A 30 year celebration was held Wednesday at Country Cupboard. Cashion mingled with old friends and customers while Bruce cooked hot dogs on the grill.

Cashion and Bruce talked about the changes in the business over the years. Things like loyalty programs and “pay at the pump” weren’t around in the 1980s. Cash transactions were the norm back then. Today, it’s all debit and credit cards.

And everything is done electronically now, they said. Bruce said he remembers when he had to punch prices into the cash register. Today, items are simply scanned.

“I tell people, the gasoline part of this business I don’t understand,” she said.

She buys gas from a wholesaler and finds out each day at 5 p.m. what the price will be for the next day.

She tells people she “handles money for the gas company” because as soon as money lands in her business bank account, it’s used to buy more gas.

Sometimes, Cashion said, she loses money on gas if she has to lower her prices to match the competition.

“Have to get people into the store” to make a profit, she said.

She also said vendors, the companies she gets her merchandise from, have a lot more power in dictating prices now then when she first started out.

It used to be vendors had set prices, she said, but now, if a vendor knows she’s selling the product for more than another store, they’ll raise the price on her.

The profit margin is not there like it used to be, she said.

When the gas sales are taken into account, running convenient stores is a multi-million dollar business, Cashion said.

“I do my part to keep the economy going,” she said about the taxes her business has to pay.

Cashion said she feels blessed to have been able to keep the business going this long and become a mainstay in the community. Her son was just a little boy when she and Crump started the company, but now he is 35 and Cashion has two “beautiful” grandchildren.

She said she wears a lot of hats as a business owner, and that, if she could, she’d spend more time in the stores to talk with customers.

“I love the business,” she said.