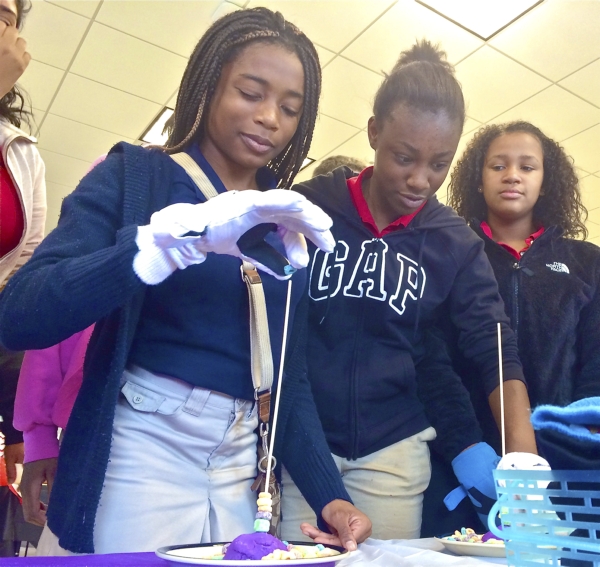 Learning came to life for children of all ages at Rowan-Cabarrus Community College’s STEM Open House Thursday and Friday.

The event is a part of the North Carolina Science Festival, a multi-day statewide celebration of science, technology, engineering and math, better known as STEM in the education world. This is the fourth year the college has hosted a STEM Open House, which features interactive activities throughout its North Carolina Research Campus facility.

For the first time this year, the college added and evening component to the Open House, opening it up to families Thursday night. Despite the rain and cold, roughly 200 people showed up. A total of 750 people visited the open house between Thursday night and Friday.

There were engaging activities for students of all ages – from preschoolers to high school seniors.

“Their opinions about STEM and the college are formed at such a young age,” said Paula Dibley, Rowan-Cabarrus director of college relations, marketing and communications.

She added that STEM is important to Rowan-Cabarrus Community College.

“STEM is really in everything,” she said.

Those four core subjects touch so many of the programs at Rowan-Cabarrus.

Cosmetology students have to learn how to mix chemicals in dyes, nurses need to know anatomy and physiology, fire fighters and police officers use a wide variety of technology in their field. Even artists use geometry in their artwork.

Students were engaged with all their senses – they tasted healthy smoothies, lifted a dummy, danced, launched rockets and diagnosed diseases. They had the opportunity to talk to SWAT team members and learn about having a healthy diet and the effects of smoking.

Being interactive is “key,” Dibley said.

One group of Rowan-Cabarrus nursing students set out to educate the children passing through about Alzheimer’s and dementia.

To demonstrate how Alzheimer’s impacts motor skills, Malaysia Grier and Amya Brown, eighth graders at Kannapolis Middle School, were asked to place Fruit Loops on a skewer standing upright. An easy enough task was made much more difficult, however, when they were given bulky ski gloves to wear and instructed to close their eyes.

The exercise was meant to replicate what an Alzheimer patient might go though.

“Parts of their brain deteriorate and they have to work harder at everyday tasks,” Mallory Vanderhoef, a Rowan-Cabarrus nursing student explained.

There were a number of opportunities for students to handle actual animal body parts, such as a sheep’s brain, a cow’s eye and a cat’s intestines.

The college’s health sciences program used to hold a health fair, but because of the success of the STEM Open House, it’s been incorporated into the event, adding additional opportunities for students to learn about healthy lifestyles.

One room was solely dedicated to the dangers of smoking and secondhand smoke. In another room, Rowan-Cabarrus students and staff talked to the children about sleep habits and diet.

Students got to dance it out in another room as they learned about the importance of physical activity and exercise.

Joy Seger brought her kids, who vary in age from very young to teens. She said they enjoyed all the different options the Open House had available.

“I thought the dissections were cool,” said her 17-year-old daughter, Hope.