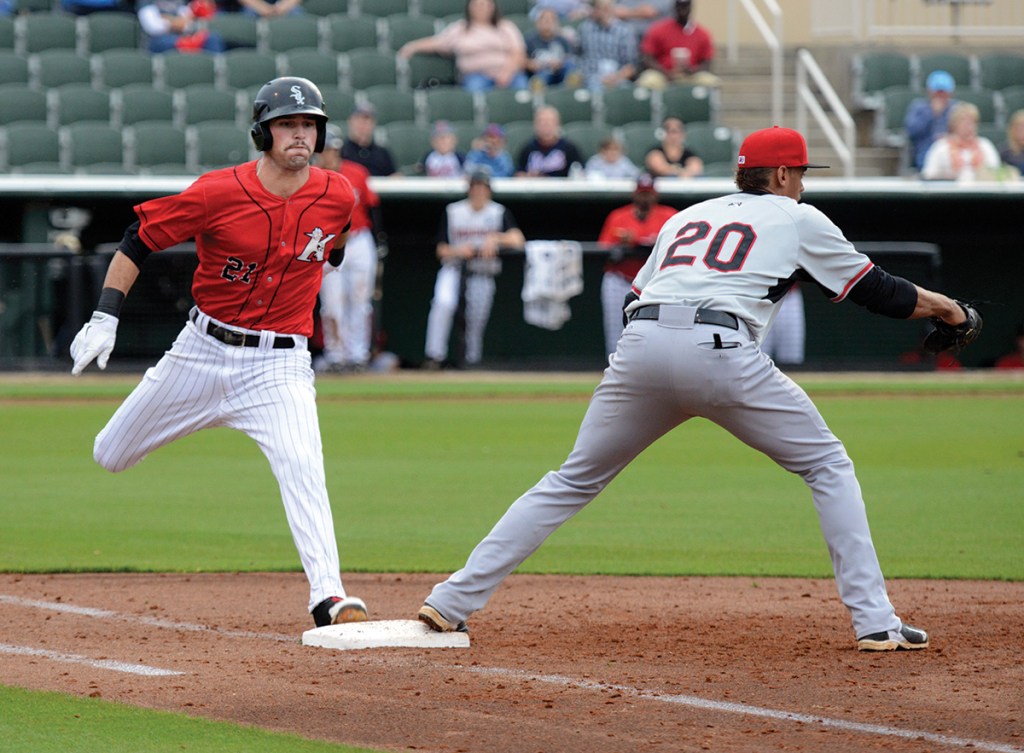 photo by Wayne HInshaw / for the Salisbury Post Kannapolis’ Louie Lechich (21) is out at first base with Hickory’s Ronald Guzman (20) covering the bag. The Crawdads swept Friday’s doubleheader at CMC-NorthEast Stadium.

KANNAPOLIS — The Kannapolis Intimidators finally got their 2015 home season under way Friday night at CMC-NorthEast stadium, but it was not the type of welcome home they wanted.

The Intimidators fell victim to an offensive onslaught by their South Atlantic League rivals, the Hickory Crawdads, and dropped a pair of seven-inning games 9-5 and 5-1.

Rain washed out the team’s intended home opener Thursday as they came off a seven-day road trip to open the new season. Kannapolis (3-6) never got on track all night Friday against the Hickory pitching staff.

The lack of run production so far this season is not a big concern to Intimidator veteran catcher Brett Austin.

“It is too early in the season to worry too much about that,” Austin said after going 2-for-3 in the first game. “Hitting is hard enough as it is. We just have to get in one of those grooves and that will happen.”

Apparently the visiting Crawdads (6-2) are already in one of those grooves based on the doubleheader sweep. In the opening game, Hickory unleashed a barrage of extra-base hits, including two homers, to produce the 9-5 win.  A five-run third did most of the damage and chased Intimidator starter Spencer Adams (0-1).

A 2014 second-round pick who just celebrated his 18th birthday last week, Adams gave up five singles early to fall behind 2-1. In the third, Hickory broke it open by batting around including RBI doubles by Luke Tendler, Michael DeLeon and Jose Trevino. Eduard Pinto added a run-scoring triple to deep center field as the lead reached 7-1.

Austin noted that the young pitcher was just not hitting his spots.

“He left it up in the zone a little bit and they took advantage of it,” “ he said. “Hickory is a great hitting team.”

Intimidator second baseman Christian Stringer, who doubled in the first, crushed an RBI triple to the right field corner as the lead was trimmed to 7-3. Kannapolis added two more in the fourth thanks to another triple by outfielder Nolna Earley.

But Hickory showed more power with solo home runs in the fifth by Travis Demeritte and in the seventh by Luke Tendler.

The 5-1 win in the second game for Hickory featured more power, including a monster homer to right by 240-pound first baseman Ronald Guzman. The two-run shot made it 3-0 in the third. Then they added single runs in the fourth and the sixth.

The only Kannapolis bright spot was first baseman Chris Curley’s second homer of the season in the sixth.

Kannapolis actually outhit Hickory seven to five in the second game, but it stranded six base runners in the first three innings against Crawdad starter Luis Ortiz. Trey Lambert got the win in relief while Intimidatior starter Yelmison Peralta fell to 0-2 despite deserving a better fate with five innings of four-hit baseball.

The opening night crowd started off sparse when the first game began at 5:05, but by the end of the doubleheader 2,899 fans came out. A bigger crowd is expected Saturday night with the first fireworks show of the new season to follow the 7:05 game.