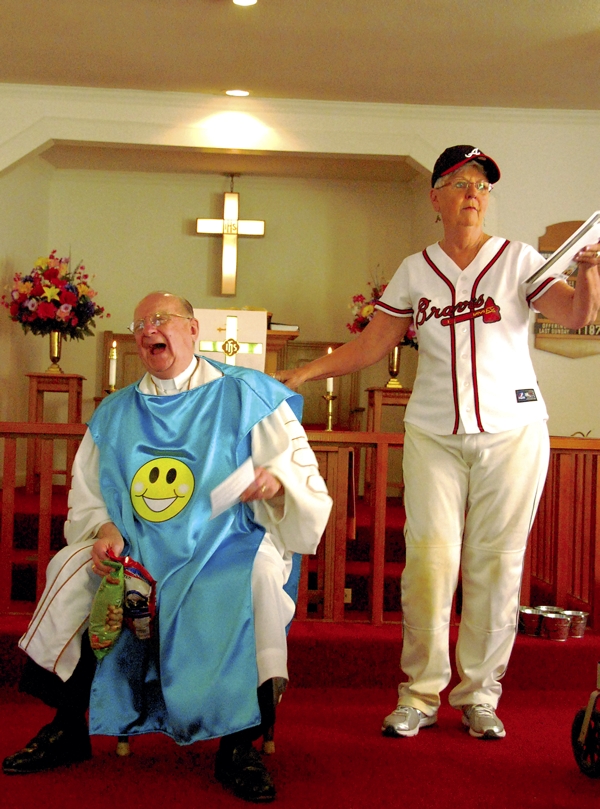 Holy Humor Sunday is the time Christians laugh at the devil because Christ won and the devil lost when Christ rose from the dead.  Dr. S. B. “Doc” Warner, pastor wore a bright blue smock with a smiley face on the back and the front over his robe.  Shirley Alexander, church lay leader, wore her “official” Braves baseball uniform.  There was a lady with a Mini Pearl hat, a man with his hunting clothes who brought along his duck call and blew it several times during the service, as well some of the youth who wore their pajamas.  A picture of the Smiling Christ was hanging in the sanctuary.  Mathew Weaver, the nationally known Blue Grass musician and lecturer on Appalachian music and culture was there to lead the Call to Worship by having the congregation join with him as he accompanied them and sang “I Have the Joy, Joy, Joy, Joy Down in My Heart.”

A part of the service was a complete surprise to Doc Warner when the lay leader interrupted him and came dancing down the aisle passing out boxes of Crackers Jacks to everyone.  She followed this dramatic entrance with an extremely humorous presentation to Doc in recognition of his sixty years of ministry which would officially be on Mother’s day 2015.  She told the congregation he was being presented with two tickets to the Atlanta Brave/Chicago Cubs baseball game in Atlanta in July.  Doc grew up in Chicago and is still a Cubs fan noting that Christians must support and pray for the underdog and the Cubs certainly are the underdog.  However, when she handed him the tickets he knew that was also just part of the Holy Humor since they were hand written tickets. Wrong, wrong, wrong!  The real tickets were on their way along with a two nights stay in a top notch hotel near Turner Field.  Finally, a very large Turner Field seating charge was presented which showed his tickets were in his favorite area right behind the Cubs dugout.  Not to be left out his wife received Cubs ear rings.  Matthew then played “Take Me Out to the Ball Game.” That section of the service was completed with Matthew playing and singing Doc’s favorite song that Matthew had written and put on one of his CD’s, “I Have A Friend.”

During the children’s time Doc asked them about Blessings with a four year old saying that blessings were food.  That wasn’t planned, but was the perfect answer since the plan was to have the children pass out bags of popcorn for the congregation to eat during the service.  Matthew stepped up to the piano and played “I’ll Fly Away” a congregation’s favorite hymn.

The two girls who usually take up the offering brought two cooking pans to use in place of the offering plates.  Then, as soon as the offering was complete, all of the youth got up and left the sanctuary.  They returned bringing in their sleeping bags, spread them out in the center aisle and prepared to sleep during the sermon.  Joy filled the service right to the end when Doc called Shirley unexpectedly to the front of the church where he pronounced the benediction followed by Doc and Shirley dancing down the aisle while Matthew lead the congregation in “I’ve got Joy like a Fountain.”

Sunday School followed with the day being concluded with a Fun Filled Covered Dish meal.