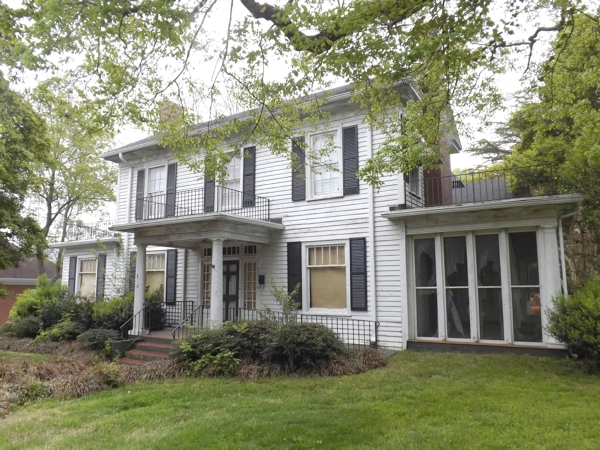 Historic Salisbury Foundation is circulating petitions to save the historic Marsh-Ward House at 125 N. Fulton St. from demolition.

St. John’s Evangelical Lutheran Church has received a demolition permit to raze the Marsh-Ward House, known by many as the former Bijoux clothing store. The house was constructed in the 1870s and remodeled in the Colonial Revival style in the 1920s. St. John’s Lutheran Church purchased the property in 2006.

The church is planning to use the property to provide parking spaces for its $5.9 million contemporary worship center, one block away.

Historic Salisbury Foundation made a proposal to the church in May 2014, which would have allowed the house to be saved and the streetscape along Fulton Street to be strengthened. This proposal was declined by St. John’s Lutheran’s building committee.

A second proposal made last month by HSF would have temporarily removed covenants from the Whitehead Cottage at 120 N. Jackson St., and allowed the church to purchase and move the house to a lot owned by the foundation. This would have provided parking directly across North Jackson Street from the church’s new facility.

As part of the proposal, HSF would have been given the Marsh-Ward House along with the approximately 10’ feet of land behind the house. The remainder of this property would be retained by the church for its new parking lot.

The church’s building committee has declined this latest offer and offered the Marsh-Ward House to the foundation to move to a new site or to salvage materials from the building prior to its demolition.

HSF feels that keeping the Marsh-Ward House at its original location would provide screening for the proposed parking lot behind it.

The Marsh-Ward House along with four historic houses across the street were identified as potentially eligible for listing on the National Register of Historic Places in the 2001 Phillips & Oppermann Study, conducted for the city of Salisbury.

The Foundation is circulating petitions throughout the community and online at https://www.change.org/p/st-john-s-lutheran-church-save-the-marsh-ward-house for those interested in voicing their support to save the Marsh-Ward House and see it reused in its current location.   Those interested in signing the petition may also sign a copy at HSF’s office at 215 Depot Street or follow Historic Salisbury Foundation on Facebook.