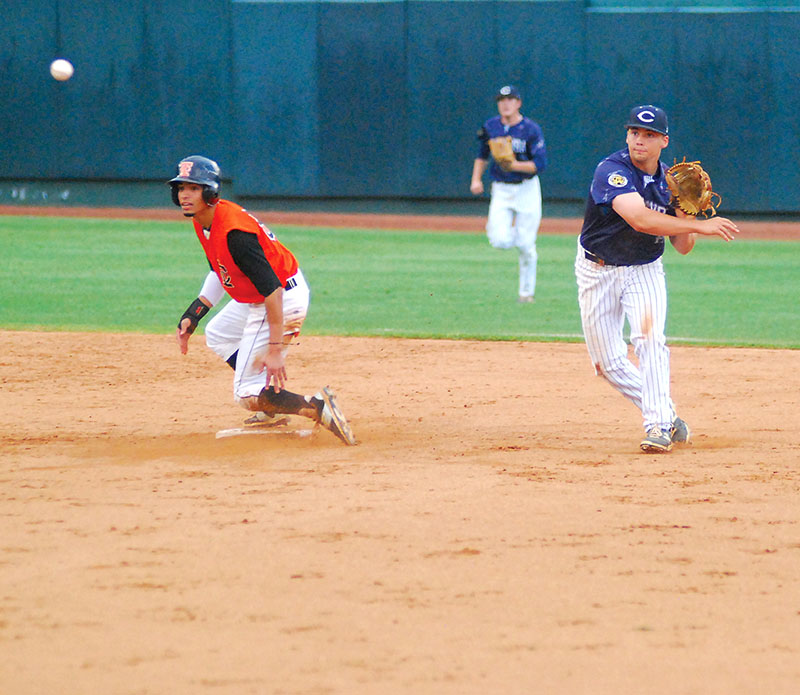 SALISBURY — If Tusculum played every game as it did Friday’s contest at Newman Park, the Pioneers would be 41-0 instead of 27-14.

Tusculum hurlers Placido Torres and Devan Watts didn’t issue a walk or hit a batter. Tusculum defenders made no errors. Tusculum hitters battled at the plate. Tusculum head coach Doug Jones exchanged his starting pitcher for his relief ace at the optimum moment.

The result was a 6-4 win over Catawba that prevented the Indians (33-10, 21-6) from clinching an outright South Atlantic Conference regular-season championship.

“When you play against Catawba, you have to play as close to perfect as you can to have a chance,” Jones said. “They’ve got a lot of talent. It’s hard to keep them in the ballpark.”

Catawba out-homered the Pioneers 3-0. Will Albertson belted the first pitch he saw for a two-run homer, with Blake Houston on base. Albertson came back from an 0-2 count in the third inning to crush his second homer of the night and 21st of the season.

“Their lefty starter had velocity, and he threw me a splitter that I swung at and missed on that second at-bat,” Albertson said. “I was able to come back in the count, and I got a pitch to hit.”

Catawba also got a homer from Craig Brooks in the third. That blast gave the Indians a 4-3 lead, but their bats went silent.

“I run into one once in a while,” Brooks said. “I need one of those now and then to pick my spirits up, but this was a pretty terrible loss for us.”

Catawba was on the wrong end of a close call at first base that ended the bottom of the fourth. Bryce Fowler was out on a bang-bang call. If Fowler had been ruled safe, Albertson would’ve been batting with the bases loaded.

Catawba starting pitcher Shaefer Shepard (8-3) hit three batters, walked two and allowed 10 hits in five-plus innings and didn’t get much help from his defense. Catawba had chances to turn three game-changing double plays, but only one was successful.

“Shepard pitched well enough to win,” Catawba coach Jim Gantt said. “We had several plays where some inexperience showed up, and it hurt us. We’ve just gotta play better.”

It was 4-4 going to the sixth. That’s when  Tusculum put together a string of feisty at-bats. Andrew Bowerman walked on a 3-2 pitch, and Jeovanny Tolentino was hit by a 3-2 pitch to end Shepard’s night. Facing lefty reliever Sean Grant, lefty slugger Jeremiah Tullidge  executed on a sacrifice bunt. After Jim Tolle’s groundout to the right side gave the Pioneers a 5-4 lead, Chris Waylock punched a single to right for an insurance run.

“We did a good job of situational hitting,” Jones said.

Tusculum got another boost in the bottom of the seventh. After Fowler’s one-out single brought Albertson to the plate, Jones summoned relief ace Watts from the bullpen. Watts, mixing sliders and fastballs, struck out Albertson and cleanup man T.J. Wharton — and Catawba’s sluggers didn’t get to the plate again.

Albertson nearly did. He was on-deck when pinch-hitter Austin Stilley grounded out against Watts to end the game.

“This was our first look at Albertson, and that guy is so good that you find yourself thinking about walking him, even if it means putting the tying run on base,” Jones said.

Tusculum’s pitching and defense were good enough that the Pioneers only had to face Albertson four times. They’ll see him some more when the teams play a doubleheader Saturday. His 21 homers are three shy of Catawba’s season record.

“We’ve got to come out and take two Saturday,” Albertson said. “It’s Senior Day, and we want to send our guys out on top.”